Progressives complain about "hippie punching." Conservatives roll their eyes. Business as usual for the president 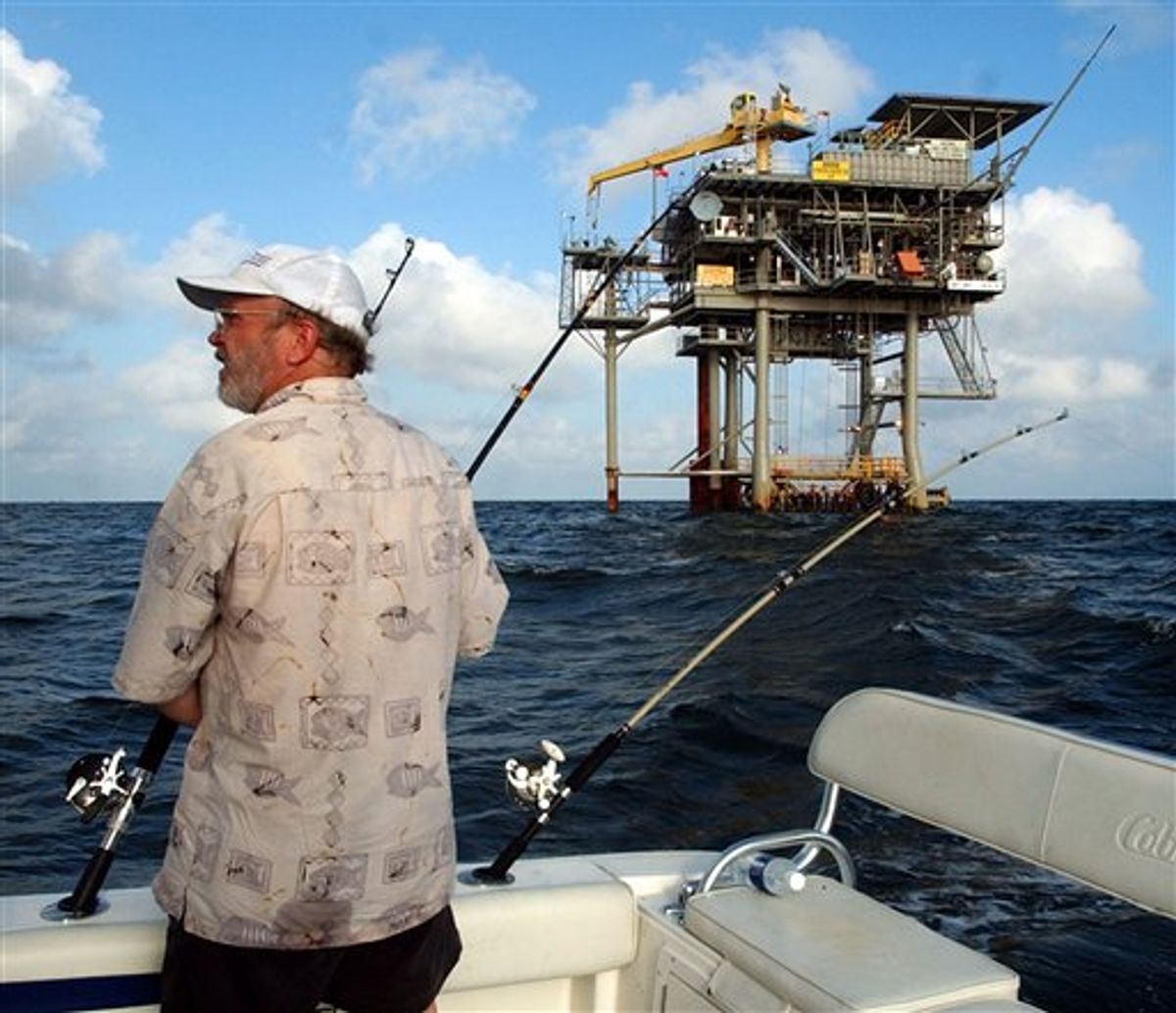 FILE - In a in this Friday, May 9, 2003 file photo, angler Andy Hails, of Montgomery, Ala., checks the fishing lines on his boat as he trolls the Gulf of Mexico near a natural gas well off the Alabama coast near Gulf Shores, Ala. President Obama announced his new offshore drilling policy Wednesday, March 31, 2010. President Obama is allowing oil drilling off Virginia's shorelines and considering it for a large chunk of the Atlantic seaboard. At the same time, he's rejecting some new drilling sites that had been planned in Alaska. (AP Photo/Dave Martin, File) (AP)
--

Two contrasting takes on President Obama's announcement that the administration "will consider potential areas for [offshore oil] development in the mid and south Atlantic and the Gulf of Mexico."

Brendan Cummings, senior counsel at the Center for Biological Diversity:

"Short of sending Sarah Palin back to Alaska to personally club polar bear cubs to death, the Obama administration could not have come up with a more efficient extinction plan for the polar bear."

Sound-bite craftsmanship bridges the partisan divide! "Cram-thru job-killing, energy-depleting, burdensome Cap & Tax scheme" is a marvel of compressed negativity. Meanwhile, Cummings' "more efficient extinction plan for the polar bear" is brilliantly nasty, albeit ludicrous overkill. Personally, I think it would be much more efficient to shoot polar bears from airplanes, but what do I know?

Neither comment need be taken seriously, but together they do offer a good illustration of the perilous terrain that Obama is navigating: Environmentalists are outraged at a "hippie-punching" betrayal while Republicans are dismissive. Just about everybody interprets the move as generated by some kind of political calculus aimed at getting a climate/energy bill passed, but almost no one thinks that the plan will work.

So why do it? Or, as climate activist Joe Romm exploded: "Why? Why? Why?"

The first answer should be, why is everybody so surprised? Obama's been signaling a move like this for years. In his State of the Union address in January he was blunt:

And that means building a new generation of safe, clean nuclear power plants in this country. It means making tough decisions about opening new offshore areas for oil and gas development. It means continued investment in advanced biofuels and clean coal technologies. And, yes, it means passing a comprehensive energy and climate bill with incentives that will finally make clean energy the profitable kind of energy in America.

Even further back, in August 2008, when skyrocketing gas prices became a serious campaign issue and crowds were chanting "drill, baby, drill" at Sarah Palin rallies, Obama said he was "willing to consider" lifting the moratorium on offshore drilling if it would help get an energy bill passed.

True, that was a flip-flop on the campaign's earlier opposition to lifting the moratorium, but it was also a coolly pragmatic reaction to political reality. The McCain campaign made significant headway on the energy issue precisely because it is a charged topic that the American people are deeply split on -- and not just for ideological reasons.

On environmental grounds, Obama's EPA and Energy Department are making decisions every day that are as progressive or more so than any previous administration's. His administration is funneling billions of dollars into clean-tech research and  development and fuel economy standards have been strengthened. But even if he doubled or tripled or quadrupled current spending on renewable energy, we are still a long, long way from the point at which we can wean ourselves from fossil fuel dependence.

From my perspective, [Obama's decision] constitutes a welcome concession to the reality that the day when renewable energy sources can pick up the entire load now carried by fossil fuels is a long way off -- decades, not just years -- and that until then we still have some important levers to pull in minimizing the amount of foreign oil we must import...

... As usual the traditional media has gauged the potential resources involved with its customary lack of insight into how oil & gas are produced in the real world, comparing them to a few years of total US consumption. The subtext here is clear: how much should we risk for a couple more years' supply of a depleting resource? The reality is quite different. Even at the low end of 39 billion barrels of recoverable oil cited by Secretary Salazar, the new zones could eventually contribute several million bbl/day for a couple of decades. If ramped up quickly enough, that could overcome the underlying decline rate of current US output and add significant net production for a decade or two, at a time when competition for the oil we are currently importing is likely to be fiercest: as the growth of Asia continues and the domestic energy needs of exporting countries skyrocket, but before renewables, conservation and vehicle electrification can achieve their full impact.

Given our energy needs, in order to sustain economic growth and produce jobs, and keep our businesses competitive, we are going to need to harness traditional sources of fuel even as we ramp up production of new sources of renewable, homegrown energy.

One can disagree with this analysis, and argue that the environmental threat posed by offshore oil, combined with the imperative of reducing greenhouse gas emissions, outweigh the economy's hunger for energy. And that's not a bad argument at all. But nor is Obama's position a crazy, troglodyte, complete-sellout-to-Exxon stance. On the contrary, it's a stance that will make sense to a hefty portion of the electorate, voters who can recognize Republican obstructionism for what it is but are also worried about what higher energy prices will mean for their pocketbooks.

Obama's resolutely middle-of-the-road position isn't going to please anyone with strong passions on either side of the issue. But that's exactly how he rolls. In this case, with certain regions -- Bristol Bay in Alaska -- deemed off-limits, and other regions open to the most preliminary step of exploration, we are witnessing, as Bryan Walsh observes at Time, "prime Obama, splitting the differences on a problem that has divided the country right down the middle."

He may not get any votes from Republicans, who seem determined to be as obstructionist as possible in the run-up to the midterms. But Republicans are stuck -- they have, as Obama told them in his question-and-answer exchange with the House GOP caucus, boxed themselves in. Anything Obama does must be opposed, even if it includes agenda items that they have long supported. The strategy appears to have backfired on healthcare and it may well do so again on energy.

My guess is that Obama's bet is that the longer he sticks to his guns, the longer he makes the case to voters that he is, as Andrew Sullivan puts it, "the most reasonable guy in the room." By the time 2012 rolls around, that might not be a bad position to occupy.