Triumph of the iPad

As the world bows down before Apple, Steve Jobs proves once again that he is the master 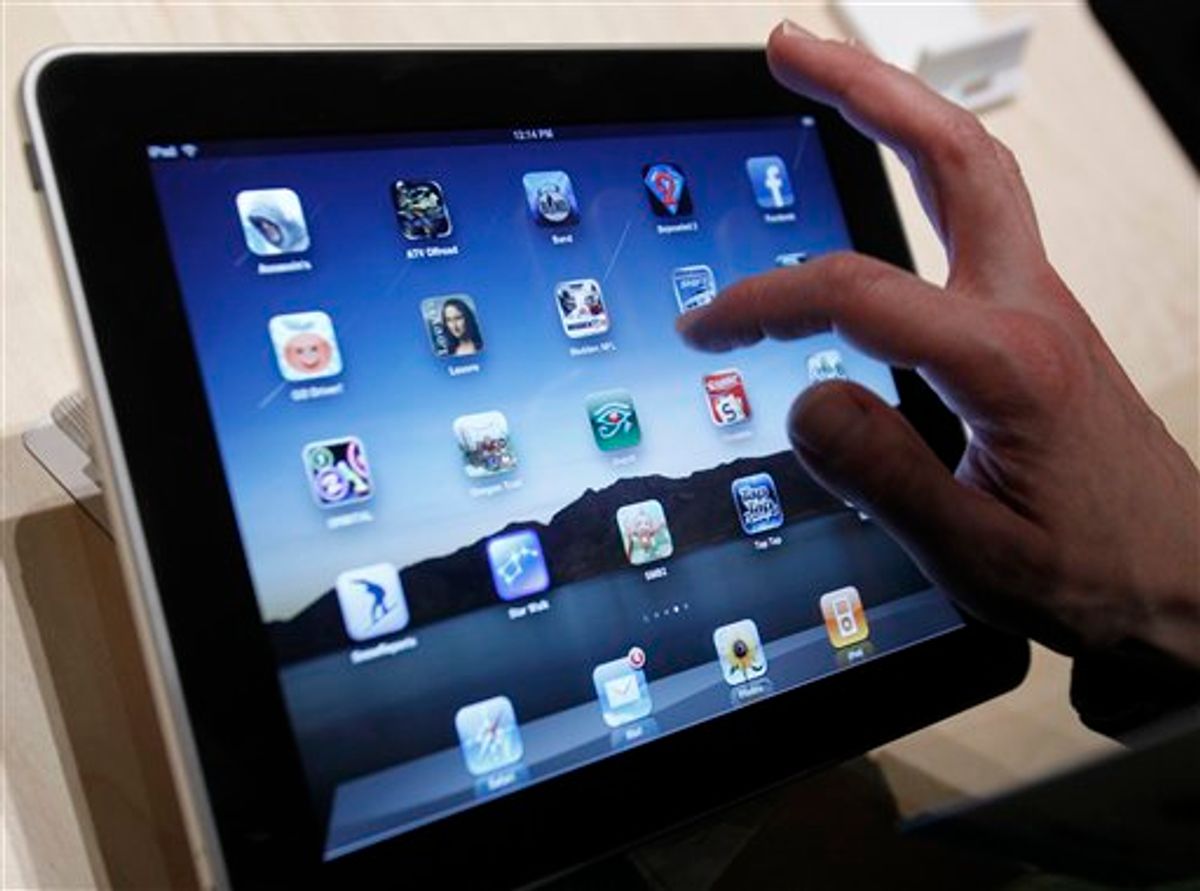 FILE - In the file photo made Jan. 27, 2010, the iPad is shown after it was unveiled at the Moscone Center in San Francisco. Apple Inc.'s iPad tablet computer hits U.S. shelves on Saturday, April 3, 2010, but fans who want the new touch-screen gadget shipped directly to them must wait a week.(AP Photo/Marcio Jose Sanchez, file) (AP)
--

If you ignored the iPad naysayers and bought stock in Apple on January 28, the day Steve Jobs demoed his wonder-tablet at San Francisco's Moscone Center, a single share would have cost you $199.29. Today, at 10 a.m. ET, two days before the iPad is officially available in stores, Apple shares were selling at $238.18. Your blind faith in the genius of Jobs would have been well served, irrespective of whether you yourself felt any desire to purchase the new computing device.

On April 1, Apple's share price was up three dollars in the first half hour of trading, which isn't too surprising when one considers the near universal applause reviewers who have spent the last 24 hours with their fingers surgically attached to the iPad's touch-screen have showered upon the magic slate. Any company which can inspire Boing Boing's Xeni Jardin to talk about how a computer touches "a new pleasure spot" and the Wall Street Journal's Walt Mossberg to speculate that it might be a "laptop killer" is clearly doing something almost unimaginably right. The iPad equals sex and violence to the rest of the computer industry. Wow.

Apple is currently sitting on a market capitalization of $215 billion dollars! That is the third biggest market cap of any American company, behind only Exxon and Microsoft -- two corporations that will never, ever be the beneficiaries of the kind of loving media attention that Apple now enjoys. Entertainment and media companies are falling over themselves in their eagerness to design specialized apps that will take advantage of the iPad's crisp graphics and supposedly sublime interface. The New York Times' David Pogue cannot contain his excitement at the thought of Hulu-delivered TV shows free on his laptop. Netflix will stream to the iPad, free for any existing subscriber. And so on. Steve Jobs has managed to capture the attention of the entire world's population of people whose livelihood depends on generating profit from the delivery of content. That's just remarkable.

Speaking personally, I feel zero urge to buy a device that can't multitask, play Flash video or games, has no camera or USB ports, and seems purposefully designed to make me pay money for proprietary content that right now I can get for free. (Although I certainly reserve the right to change my mind when next year's iPad includes all of the above, or has driven Flash from the Web like the scourge of an Old Testament God). But I can only look on in awe at how masterfully Steve Jobs is managing his company. From the moment he first lifted the veil on the iPad until today, the entire process has been a work of art. Genius doesn't seem adequate to describe it.