"Clash of the Titans" could make the gods weep

It's a mythological extravaganza with a messy story, a lame monster and no magic. Release me, Kraken! 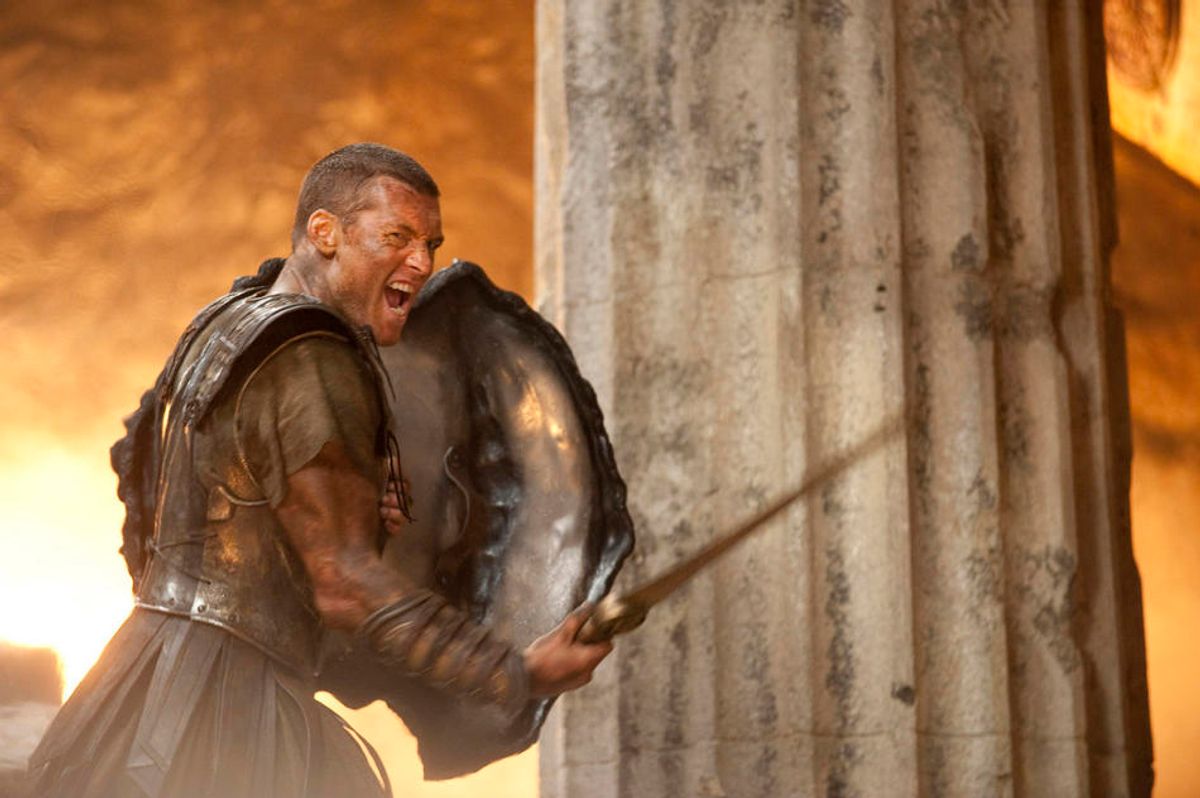 Sam Worthington in "Clash of the Titans." (Jay Maidment)
--

Many of us who fancied ourselves sophisticated in 1981 freely mocked "Clash of the Titans" at the time of its theatrical release: A hokey-looking fantasy that plays fast and loose with Greek mythology, starring a well-oiled Harry Hamlin as brave warrior Perseus and Laurence Olivier as his top-god father, Zeus? No thanks. We were too busy oohing and ahhing over the prim aesthetics of "Chariots of Fire" to fall for anything so obviously fake as a flying white horse.

Since then, many of us have seen the error of our ways, and we now know what little kids who were dazzled by watching "Clash of the Titans" on TV (it was a staple of HBO in the early days) have always known. Directed by Desmond Davis and with stop-motion special effects by the great Ray Harryhausen, the first "Clash of the Titans" is an unself-conscious treasure of fantasy filmmaking. Harryhausen's creatures -- from his feathery-winged Pegasus to his fearsome yet sympathetic sea beast the Kraken -- are low-tech by today's standards. Yet within their specially created universe, they're wholly alive, not disposable. Their fantastically unreal qualities demand a measure of engagement from the viewer, and it's that engagement -- not the amount of money or time spent on their creation -- that gives them life.

Say goodbye to all that with the new 3-D "Clash of the Titans," in which Sam Worthington's Perseus struts around importantly in a Utilikilt, Pegasus is something of an afterthought (and is black instead of white), and Zeus and Hades are played by the Tweedledum-and-Tweedledee versions of Olivier, Liam Neeson and Ralph Fiennes. And unlike the original -- which, in a crazy stroke of genius, allowed Shakespearean thespians like Claire Bloom and Maggie Smith, plus Bond babe Ursula Andress, to mix it up as jealous goddesses -- the new "Clash of the Titans" is frightfully low on babes. Gemma Arterton and Alexa Davalos -- as, respectively, Io and Andromeda, the two beauties who vie for Perseus' stolid soldier's heart -- are comely enough, but there's no sensuous glow about them. They're eye candy, not enchantresses.

Of course, lamenting that the old "Clash" is so much better than the new one will take us only so far. Any remake has to stand on its own merits. That said, "Clash of the Titans" still sucks. The story -- the script is by Travis Beacham, Phil Hay and Matt Manfredi -- is unruly and unnecessarily complicated: Perseus may be the son of Zeus, but he's been raised by human parents (played all too briefly in the movie's early scenes by Pete Postlethwaite and Elizabeth McGovern). When they're killed by Hades, god of the underworld, he stomps around for a bit, looking angry. Then he decides to lead a mission, with the help of some hotshot soldiers from Argos (the hottest of these is played by Mads Mikkelson; less hot is gangly, confused-looking Nicholas Hoult), to defeat the god who killed his family. Meanwhile, Neeson's Zeus (clad in a sizzling-white, headache-inducing suit of armor) and Fiennes' Hades (scowling as he sports the ever-popular bald head with long fringe look) duke it out over something or other. And Perseus and his crew get on with the business of fending off giant scorpions, beheading the serpent-tressed Medusa (a CGI creature modeled from the face and form of fashion model Natalia Vodianova) and, ultimately, sending the Kraken packin'.

The Kraken is big all right, and his design -- a small, turtlish head perched on a gargantuan body -- owes a debt, as so many modern movie creatures do, to H.R. Giger's design for "Alien." But this Kraken is disappointing; there's no glamour or mystery to him. He's overscaled and underwhelming, and even in 3-D, he lacks dimension. The director of "Clash of the Titans" is kooky Frenchman Louis Leterrier, and based on some of the intentionally over-the-top pictures he's made in the past (including the gorgeously melodramatic "Danny the Dog"), he isn't necessarily a bad choice to breathe new life into an old favorite. But the picture is loaded with dimwitted proving-your-manhood dialogue -- "This isn't your fight!" one of Perseus' girlies exclaims, to which he responds, with all the expressiveness of a green-plastic army man, "Someone has to take a stand!" -- and not even the picture's aggressive special effects are enough to distract us from it. "Clash of the Titans" was converted to 3-D after it was completed, and I wonder if it wouldn't be more enjoyable as a straightforward 2-D feature: The use of 3-D renders the action muddier and more indistinct than it might otherwise be, and the movie's fantasy vistas, of seaside cliffs and rugged desertlike terrain, don't look particularly distinctive in the retrofitted format.

The fact that some genius at Warner Bros. decided that a 2-D "Clash of the Titans" just wouldn't be good enough for movie audiences -- or, more likely, recognized that the extra dough moviegoers have to fork over for 3-D glasses would dramatically pad the grosses -- suggests that Hollywood thinks it's got us just where it wants us. We want spectacle at the movies, as we always have; we want action and drama and escape.

But what about everything Hollywood, with movies like this "Clash of the Titans," is failing to give us? The movie is big all right. But where's the magic? And where, dare I ask, is the eroticism? We barely get a kiss between Worthington and Arterton, not that I particularly wanted one. On the other hand, in the original, we see the spirit of Andromeda (played by Judy Bowker) being carried off in a golden cage by a winged beastie, as her left-behind body sleeps behind a sheer, sparkly curtain. The image is lush, unsettling, dreamily evocative. The new "Clash of the Titans" is supposed to stand for progress, and the promise of huge profits, as we purportedly stand at the forefront of a 3-D revolution. Instead it's a symbol of everything we've lost. But at least it reminds us that our 2-D dreams can't be so easily replaced.

Clash Of The Titans Movies