On an episode full of bumps and twists, designers create yet another gown for their hard-to-please host 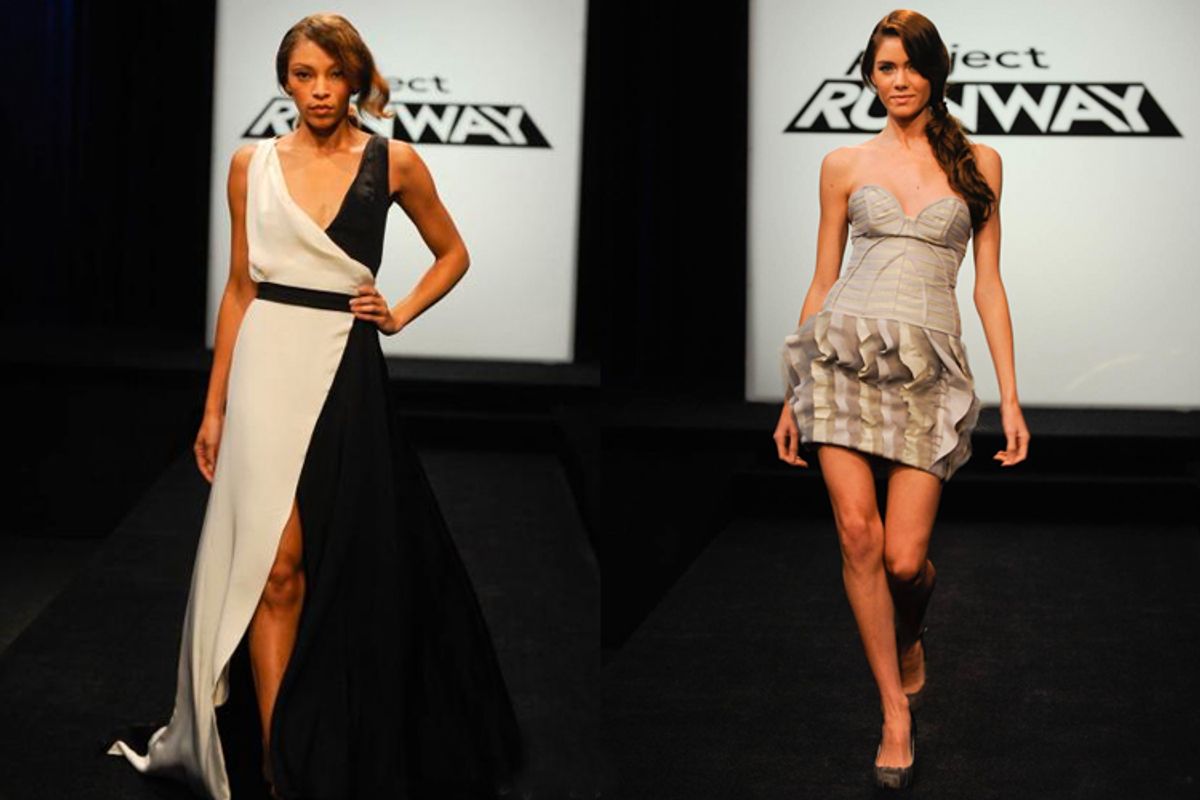 I woke up Thursday morning and remembered that the judges voted Anthony off last week. It kind of bummed me out for the rest of the day. While his dresses were more cotillion than couture, his happy quips were a welcome distraction from the nonsense in the workroom. Well, perhaps we'll see him again some day. (Subtle foreshadowing.)

At the now-familiar Atlas apartments, we are greeted by groggy, disheveled and discouraged designers. The guys miss Anthony's humor, Mila is stressed because the judges were mean last week and Maya is proud to be the youngest contestant, damn it. (Subtle foreshadowing.)

The contestants go to meet Heidi, who tells them they will be designing a celebrity look for someone who is notoriously picky and opinionated. With this vague warning, the designers gamely move into the workroom, where Tim will have more details. With horror-movie music playing in the background, Tim tells everyone that the challenge is to design a red carpet look for a celebrity. Are you ready to meet her? Yes! Who is it? Is it Angelina? Cameron Diaz? Kate Gosselin? The door opens... Oh. It's Heidi.

Yes, once again, the designers will be creating a look for Heidi to wear, this time on the red carpet. One can only wonder what sort of dire financial straits she and husband Seal are in since she is constantly using "Project Runway" as a source for garments. She admonishes them, "I want to be on the best dressed, not the worst dressed list."

With that warning, the designers begin sketching and mumbling to themselves. Jonathan thinks he needs to be in opposite world for the judges to like him, because he was convinced his dress last week was stunning. So he decides to make something really ugly and is sure this will cause the judges to like it. Mila doesn't do red carpet. She just doesn't. Emilio is designing something not subtle that will be sure to impress the paparazzi. Maya mysteriously walks out of the workroom. The camera pans to her empty work station at least three times during the sketching. (No longer subtle foreshadowing.)

Tim walks in with a shy Maya and says that she would like to make an announcement. She is leaving the show. She just got out of school, can't perform on command, isn't ready and needs to figure out what her point of view is. In the words of Seth Aaron, "Are you bleeping crazy??" Everyone is shocked, and Emilio is particularly supportive when he says the decision is a cop out and quitters are never winners. In an interview, Seth Aaron tells us all off, swearing at us and saying we don't understand the pressure of being on "Project Runway," so don't judge Maya.

Everyone takes an uneventful trip to Mood fabrics, and then Tim comes into the workroom again to say that of course they can't continue with only five designers, so the show is bringing a designer back. "Here she is!" In walks Anthony, in all his aqua-shirted glory. Yay! The designers get back to work, and Anthony is sent to Mood alone.

Tim comes into the workroom yet again and cannot believe just how busy he is this week. He needs a private chat with Seth Aaron. It seems that Valeria, his model, was offered a job with Donna Karan, so he is going to need to work with a new model. Seth Aaron admirably takes it all in stride and adjusts his dress dummy to the new shape.

Tim returns to the workroom a few hours later with Heidi in tow. Everyone is flustered and not really eager to show her their dresses yet. She tells Seth Aaron that his needs "a little bit more somewhere." She likes Anthony's black and white gown. She tells Jay, "We don't want to look bigger than we are." She questions the placement of the cups on his bustier, then proceeds to give Jay a look at her no-doubt ample bosom so he can see what proper cup placement looks like. Unfortunately, the cameras do not get a close-up of that particular moment. Mila's dress is not too simple, but perhaps others' are better. Jonathan is using coral curtains. We see lots of shots of the half-naked models being fitted. Between this and Heidi's bosom inspection, is Lifetime trying to attract more male viewers?

The sleepy designers are back in the apartment. Poor Anthony only gets two hours of sleep. Mila is happy to see that so many of the other designers' dresses are ugly, which can only help her case. Emilio, whose cockiness I have grown to downright dislike, is snarking that Seth Aaron's dress is neither Heidi nor red carpet. Jonathan is making his dress for the third time in an attempt to get rid of the curtains. After much complaining about the time crunch, everyone is finally ready for the runway.

The guest judge this week is Jessica Alba, looking unnaturally blonde. I scoff at first, but she  have a lot of experience wearing red carpet gowns, so this is probably a good judge choice.

The judges are fairly unanimous in what they like and hate this week. Seth Aaron's is deemed too boring and lacking sex appeal or the potential for "glorious cleavage." Everyone loves Anthony's gown, especially Jessica Alba. Mila's is too simple and, yes, poorly fitting at the bust. They gush over Emilio's gown. Nina keeps saying that the fabric could have looked cheap, it really could have. (I suspect she is tired of his cockiness and wanted to take him down a peg, too. Alas, not tonight.) Jay's dress is fine from the waist up, but they all hate the butt-enhancing qualities of the exaggerated ruffles. Jonathan's looks like it was put together in two hours, makes the model look waxy and plastic-y and puts her at risk for butt-cheek exposure.

After the usual deliberation, Heidi announces that tonight there is not a winner; there are two winners! Emilio and Anthony both win, and Jessica asks if she can wear Anthony's dress on the red carpet. Everyone swoons. Jonathan and Jay are in the bottom two, and Jonathan is voted off.

Next week is the last show before the final three designers are chosen to go to Bryant Park. Any predictions for winners? I have an idea, but I'll keep it to myself for now.