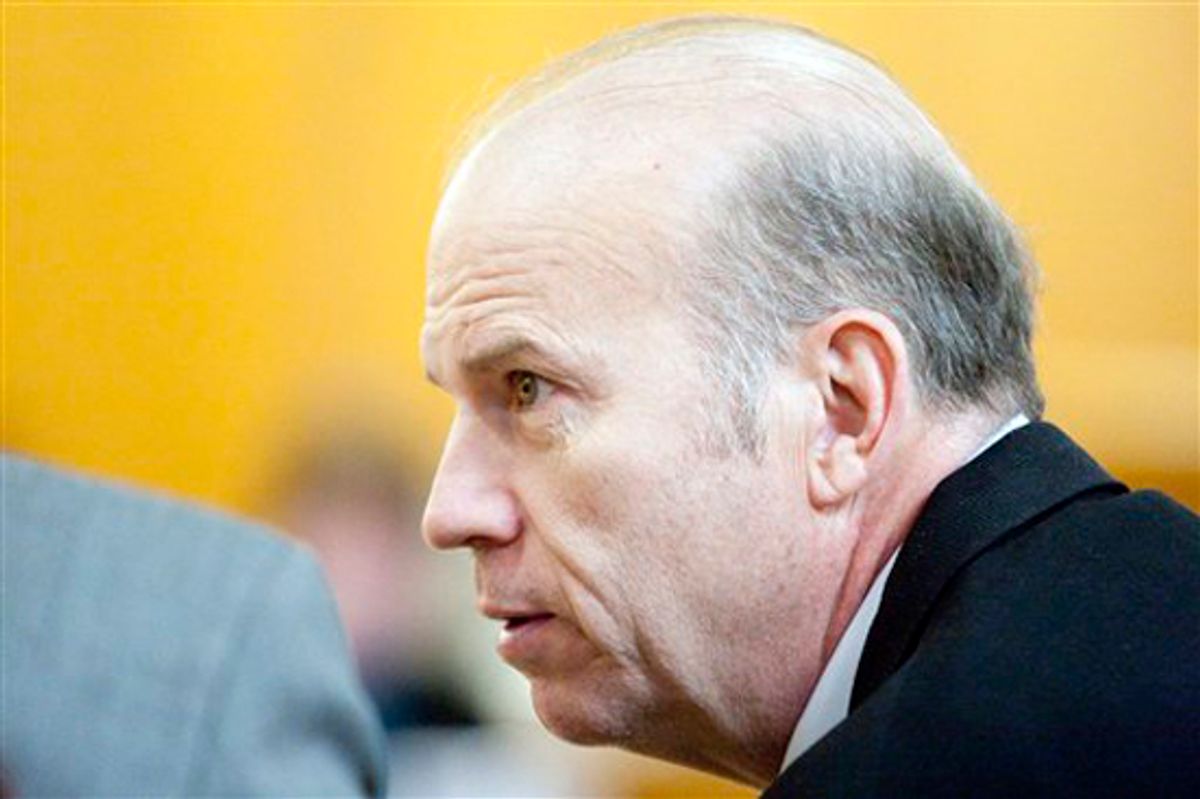 FILE - In this Jan. 28, 2010 file photo, Scott Roeder confers with his attorney during this first-degree murder trial in Wichita, Kan. Roeder could be sent to prison Thursday April 1, 2010 for the rest of his life, but he may have gotten what he wanted all along: It is markedly harder in Kansas to get an abortion. No one has stepped in to fill the void left by abortion doctor George Tiller's death nearly 10 months ago. (AP Photo/Jeff Tuttle, Pool, File) (Jeff Tuttle)
--

Scott Roeder, 52, has been sentenced to spend the rest of his life in prison for the 2009 assassination of late-term abortion provider George Tiller, M.D. The sentence was handed down Thursday by Judge Warren Wilbert at the end of a remarkable nine-hour hearing in which a self-righteous Roeder, shadowed by a burly bailiff, spoke unrepentantly in his own defense while the doctor's widow, Jeannie Tiller, sat shaking her head "no."

Roeder had been convicted in January of first-degree murder for gunning Tiller down in his Wichita, Kan., church last May. The question remaining today was whether Roeder's mandatory life sentence would carry a minimum of 25 or 50 years before he would be eligible for parole. Prosecutors -- citing Roeder's longtime stalking of Tiller and assault of others in the aftermath of the shooting -- argued for the so-called hard 50. Determining that those aggravating factors were not outweighed by factors presented by Roeder and his counsel, the judge gave Roeder the maximum sentence.

Throwing the book at Roeder sends the clearest possible message that nothing -- not even his stated belief that his actions prevented the "murder" of millions more -- mitigates his crime.

"It's disturbing that Roeder has no remorse," said Julie Burkhart, Tiller's closest associate and top political advisor, who attended the hearing and spoke to Salon shortly after it ended. "The 'Hard 50' is the right sentence."

Yet this is not over. "Roeder spending his life in jail doesn't stop the continuing acts of terrorism against providers and their staffs," continued Burkhart, who worked closely with Dr. Tiller as a grass-roots organizer and clinic spokesperson and, after his death, founded  TrustWomenPAC. Indeed, Roeder apologists would have been galvanized by either sentence: the lesser justifies their cause; the maximum makes him a martyr. But it's not just the extreme violent fringe who stand to be emboldened by Tiller's murder, and even Roeder's harsh sentence. It's also state legislatures. "In addition to creating an environment where violence against physicians and staff members is acceptable, the kind of inflammatory rhetoric that encouraged Scott Roeder also creates a political environment that's open to more restrictive bills in states across the nation," says Burkhart.

Look what's already happened in Kansas. With Tiller's clinic shuttered, late-term abortions are currently unavailable there. Yet just Tuesday night, the Legislature saw fit to pass a law narrowing existing abortion restrictions in the state. Current law permits abortion after 21 weeks of pregnancy under certain circumstances; the new law would require doctors to report to the state the exact medical diagnosis justifying the procedure after 22 weeks, and would allow a woman or her family to sue the doctor if they had evidence that a late abortion had violated state law. The law passed without the votes it needs to override a possible veto by the Democratic governor, but still: Who's to say its proponents weren't capitalizing on Tiller's death? Even the specter of the law has already had the no doubt intended effect of complicating the plans of Omaha, Neb., late-term abortion provider LeRoy Carhart, M.D., to open a Kansas clinic in Tiller's place.

Speaking of Nebraska: Senators there yesterday ended the first round of debate on the "Pain-Capable Unborn Child Prevention Act" (LB1103) which would prohibit most abortions at or after 20 weeks, based not on the question of viability -- which is normally determined case by case -- but on the assertion, unencumbered by medical consensus, that fetuses at that gestational point feel pain. A more accurate name for the bill might be "The LeRoy Carhart Prevention Act," as opponents charge that its goal is also to shut down the doctor's Omaha clinic.

States have already been having a field day with preposterous antiabortion legislation: fetal personhood, public abortion registries, mandatory ultrasounds with narration. The Roeder sentence, just though it was, won't stop that. It might even, indirectly, help make things worse. After all, the more loony and dangerous "the real crazies" look -- and the more we see we can trust the law to lock 'em up and toss the key -- the more reasonable the lawmakers look by comparison. And the more they can capitalize on that.

"Dr. Tiller was a great man: courageous and funny and deeply committed to trusting women to make their own difficult private medical decisions. He gave his patients the care they needed, judgment-free, and always referred to himself as a 'woman-educated doctor,'" Burkhart recalls. "The walls of his office were covered with thank you notes from the women and families who were grateful to him for treating them with dignity and respect at one of the most difficult times in their lives." Lawmakers who find themselves emboldened in some way by the Scott Roeder saga, let's just say, won't be getting those notes.