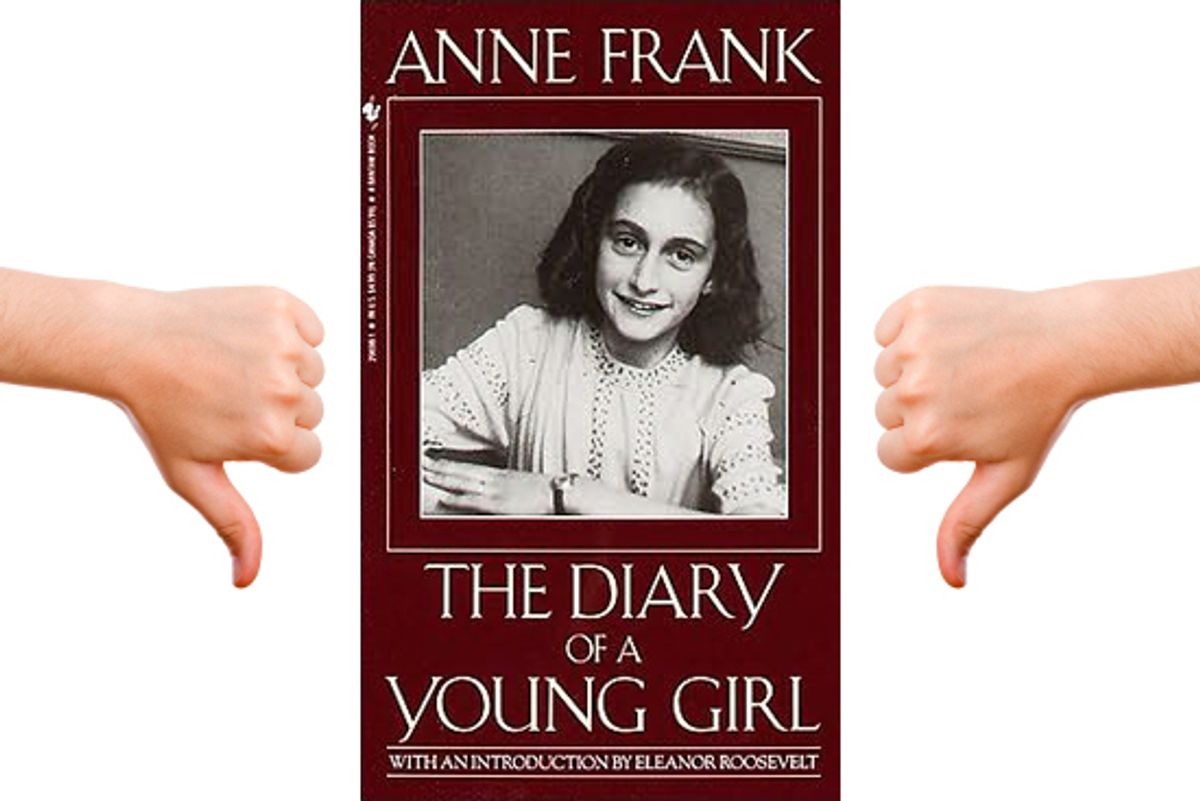 A version of this post first appeared on Jeanette DeMain's Open Salon blog.

I tend to use Amazon more as a resource about books than to actually purchase books. I can find publishing dates, latest editions, cover art and synopses. I can also read several pages of a book I might be interested in ordering, and I like the age recommendations if I am shopping for a young person. But, above all, I am always drawn to the reader reviews, especially reviews of books I have already read myself. A well-written review will often crystallize something about a book that I have had a hard time putting into words. I've gained a lot of understanding from the people who take the time to do thoughtful reviews on Amazon, and I am grateful to all of those unknown critics.

Then there are the reviews that I'm drawn to somewhat masochistically, those that give one-star ratings to a work that has moved me inexpressibly or influenced me indelibly. I thought it might be fun (well, depending on what your definition of "fun" is) to see what some of those one-star folks had to say about a few of my favorite books, as well as some of the books that appeared on others' lists.

Here for your amusement, completely unedited, are some heartfelt one-star Amazon book reviews! (I have left off any names, although most of them are written anonymously.)[sic throughout]

"The Grapes of Wrath" by John Steinbeck:

Though I've read many bad books, none can compare with this trite, contrived piece of work. Every line, every word, is deliberate and pretentious--Steinbeck is pounding it into our collective consciences at every step that this is a great work of art. People have called this book propaganda, but that doesn't even begin to cover it. Nowhere else will you find such schmaltzy dialogue, or such a laborious, falsely deep message. But I recommend everyone read this book, just to get a taste of what absolute tripe millions of people are capable of swallowing.

"To Kill a Mockingbird" by Harper Lee:

Looking for a sappy, cliched, novel to read? One predictable as most young-adult books and more degrading than harlequin romances? Well, To Kill a Mockingbird is your book. In this novel, all Harper Lee gives as a theme is "life isn't fair." I think most of us couold have figured that out without a book that should have started where the first "part" ended. Ms. Lee merely portrays a terrible, biased, southern society that seemingly places its main goal on ruining everyone elses life. Her female characters are flat, simple-minded women. Wether or not this is due to its setting is irrelevant. Lee places guilt on a group of people instead of individuals (the Ewells) as it should be. Thank God Ms. Lee only wrote this book; surely her next would degrade society even further. I'm sure it too would be deemed a classic as long as it dealt with politically correct subjects that are far too worn out to remain interesting.

Endless, pointless description. DESCRIPTION, DESCRIPTION, DESCRIPTION!!! The entire book is written in stupid metaphors. The few places where there is actually any dialogue bore the reader to tears. Honestly, i think that this is dubbed a classic simply because it is older than sand. Gee, maybe if I just go out and slop a few words down on a piece of paper, it'll be a classic in 160 years! It'll be required of every high school sophomore, like this idiotic "story." Excuse me now, I'm off to begin my masterpiece. I'm sure it'll be better than this.

Absolutely pointless book to read. I felt no feelings towards any of the characters. I really didn't care that Wilbur won first prize. And how in the world does a pig and a spider become friends? It's beyond me. The back of a cereal box has more excitement than this book. I was forced to read it at least five times and have found it grueling. Even as a child I found the plot very far-fetched. It is because of this horrid book that I eat sausage every morning and tell my dad to kill every spider I see. It is a traumatic, coma-enducing story that has changed my life forever. In conclusion I feel no one should be put through such torture and this book should be banned from every school, library, and bookstore in the Milky Way.

"An American Tragedy" by Theodore Dreiser:

In An American Tragedy Dreiser captures the essence of tragedy. This, quite possibly, was the most painful reading experience I have ever been cursed with. Not only is his imagery redundant and style convoluted, but he obviously had no knowledge of the utter pain caused by his excess verbiage. Through all 828 pages (though how would I really know, I'm not stupid enough to finish it--but I did read 300 for those of you who are thinking of bashing my opinion because of a possible lack of experience) Dresier drags out his bleak narrative of little consequence in a thoroughly anti-climactic manner. In any case there is no reason that any sane person should waste his time, valuable or invaluable, on this tragic blight on the face of literature. Avoid this book like the plague.

"A Tree Grows in Brooklyn" by Betty Smith:

This book is 3 words over and over again: MY LIFE IS BAD. 500 pages and that's all it says. It's exactly the same as any other book about a poor family with an irresponsible father and a child who manages to be alright (Angela's Ashes, Black Boy, Riding in Cars With Boys) the only difference is - THIS ONE IS FICTION. Don't waste your time, money, or your sympathy on the most over praised book ever written.

""Where the Wild Things Are" by Maurice Sendak:

With all the reviews - I bought this book for my son. While the book had some good graphics, I believe the message is all wrong. He talks back to his mother and I think the message to kids is all wrong. Save your money - there are so many other books that send a positive message.

At first I did like the book. Then it just started to suck right around the time when Winston was getting sexually involved with his girl friend. I hated the book so much that I forgot her name. The first hundred or so pages i liked, then it just got really boring. So II highly reccomend that you DO NOT READ THIS BOOK. And please for the love of God don't read that "Brave New World" book by Hoxley. It is twice as worse as 1984. To put it bluntly, DON'T READ ANY GEORGE ORWELL. Your just waisting your time.

Well, I could go on and on. I mean, I could literally go on and on. These reviews are endless. Trust me -- for every book you love, there are people out there whose lives were apparently ruined by the verbiage of these elitist authors. As can be seen from the review of "Jane Eyre" above, spending too much time describing things seems to be a particular pet peeve, as I saw this complaint voiced many times about many different books. Damn you writers and your overactive vocabularies!

I really have to wonder about these folks. Are they disgruntled students? Trolls? Malcontents who have nothing better to do? Do they think they are tilting at windmills and bravely swimming against the tide of conformity by warning others not to read texts that are universally acknowledged as classics? (In which case I might recommend that they read Cervantes' "Don Quixote," but then I'd be afraid to see their reviews of it.)

The more of these that I read, the more I became desperate to find at least one book that would be impervious to the one-star brigade.

Then it dawned on me. Anne Frank's "The Diary of a Young Girl"! Surely, no one could find fault with the poignant and honest writing of a young girl caught up in the evil of the Holocaust, setting down on paper her hopes, longings and yearnings -- a book that has made countless women want to become writers and which has inspired generations of readers to denounce hate and live more compassionate lives. Anyone? Anyone? Bueller?

Can you imagine being this person? It seems like a life completely devoid of any subtlety, introspection, caring or empathy. Or am I reading too much into these few sentences? I hope I am. Maybe this "reviewer" was just having a bad day. But, just the same, I hope I never actually meet him or her. It might get very uncomfortable.

In a last-ditch effort, I decided to see what folks had to say about the Bible. Sure enough, there were a few brave souls who dared to give the word of God only one star!

Man, this book is boring. All this weird stuff happens and it's harder to get into than Lord of the Rings. And what's up with the red writing and the LORD says stuff. All caps = rude, peter paul and mark, whoever the heck you are. And this is just badly written. James Patterson could do better. These apostles need to get a clue and hire a ghost writer. Even Miley Cyrus's manager was smart enough to do that. Jesus Christ! Jesus Christ, indeed.

You might want to try this experiment for yourself! But I warn you, you will come away profoundly disheartened and pessimistic about the continued existence of humankind.