The end of college basketball's golden age is here

Enjoy this weekend's Final Four, because the NCAA is about to ruin March Madness forever 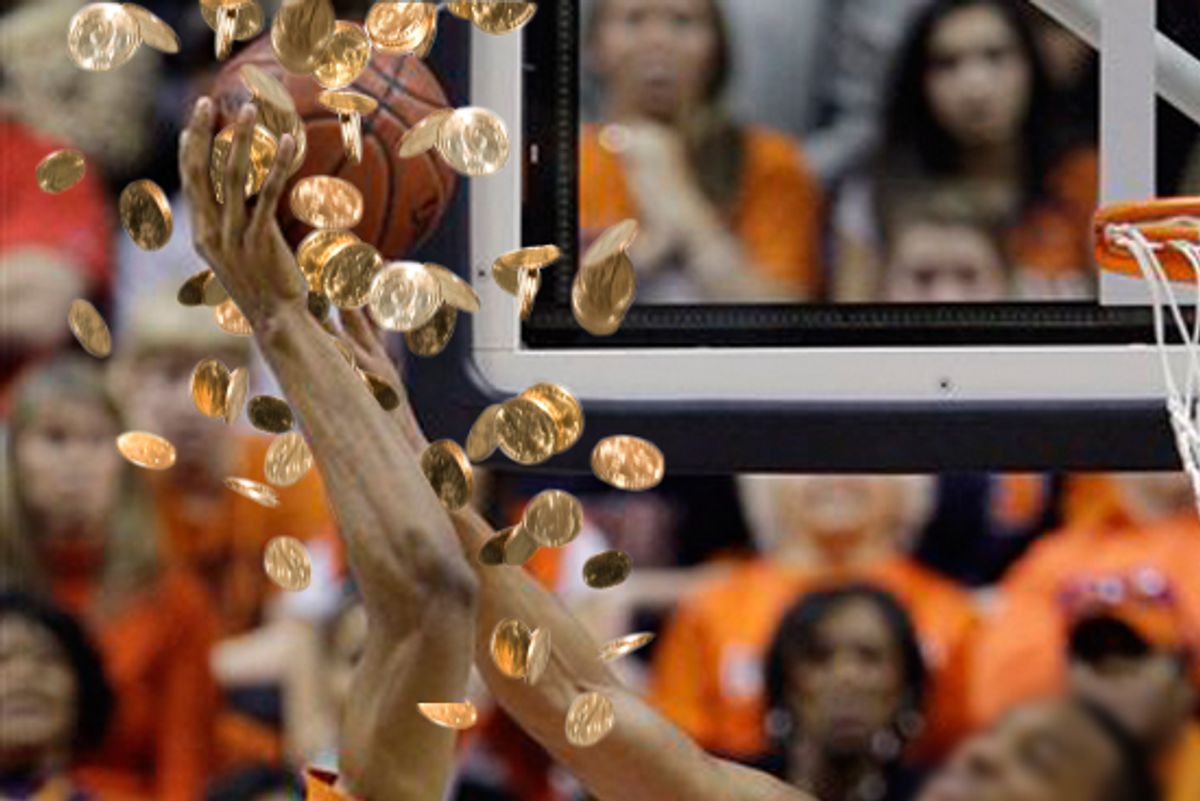 Beware the man who stares at perfection and proclaims, “I can improve this!” He most certainly can’t, and if you dare let him try, the only thing that’s certain is that he’ll end up ruining it.

And ruin, sadly enough, is the near-certain fate of what for a quarter-century has stood as one of the sports world’s last pillars of unspoiled perfection: the NCAA basketball tournament. As this year’s edition of March Madness climaxes in Indianapolis, it has become clear that the NCAA will junk the current tournament format and expand to a 96-team field starting next season.

A few days ago, the NCAA released a blueprint for its beefed-up bracket, laughably claiming that it was all theoretical and that no decisions had yet been made. Don’t be fooled. It was only the latest step in a tightly scripted rollout that began a year ago. Soon, the NCAA will sever its tournament contract with CBS and ratify the new postseason format. Then the bidding will begin.

And money, no matter what they claim, is what this is about. More than ever, television advertisers covet live events like the tournament, which still deliver the large, broad audiences that scripted sitcoms, dramas and movies-of-the-week delivered a generation ago. To accommodate 96 teams, 31 games-- spaced out over two days -- will be added to the tournament. A few years ago, ESPN (which can blow the broadcast networks out of the water, thanks to cable subscriber fees) bid more than $1 billion to air one NFL game a week. Imagine what it’ll pay for 95 do-or-die basketball games.

If you’re a casual fan, the kind that doesn’t know the difference between the Big Sky conference and the Big South, you probably won’t mind the new scheme. All you’ll know is that there are more games on the air in March, the only month you ever think about college basketball. You’ll fill out your bracket and dutifully tune it, just like you do now, while the NCAA and its new television bride sit back and drink to their own genius. Monster television ratings, after all, are built on the casual fan -- not the critical-thinking die-hard.

But the more you know about and understand college basketball, the more tragic this looming expansion seems.

Like everything else in the world, the tournament is a product of evolution. It’s been around for decades, but it wasn’t until the 1970s that it cemented its status as the sport’s preeminent postseason event. And it wasn’t until the 1984-’85 season that it expanded to its current 64-team size. (Technically, it’s now 65 teams, with two schools matched in a play-in game two days before the start of the full tournament, but the basic 64-team bracket has been in place since ‘85.)

This has already emerged as a key NCAA talking point: We’ve expanded before and things have gotten better, so why not do it again? After all, they note, the number of schools playing Division I basketball has risen by about 50 since ’85, to the current total of 343. But what expansion advocates don’t appreciate (and what the NCAA willfully ignores) is that the growth of Division I over the last 25 years has not affected what kinds of teams do and don’t make the tournament field.

Casual fans, the ones who only pay attention in March, like to complain that college basketball’s regular season is meaningless. It isn’t. Just ask Illinois, which posted a 19-14 regular season record this year (and a 10-8 mark in the Big Ten, one of the six power conferences), only to be left out of the field.

Right now, teams are forced to distinguish themselves in the regular season to qualify for the field. It’s true that the rules aren’t the same for everyone. A power conference team can (occasionally) get in with a .500 record in its league, while a small conference squad can go 28-6 and miss the field if it fails to win its league tournament (as happened to Coastal Carolina from the Big South this year). But while the quantitative standards may vary, every team that wants to make the tournament must distinguish itself qualitatively during the season. They have to earn their way in.

This is what makes CBS’s annual tournament selection show so fun. Watching the Minnesota Golden Gophers dancing around a hotel room after claiming one of this year’s final spots was a joyous sight. Whether they should have made it is a subjective matter, but with a 21-13 record (9-9 in the Big Ten), they clearly deserved to be under consideration. Their delirium was a fitting reward for hard work, steady improvement, and some achievement. Now, imagine that same scene under a 96-team model. It would have been the pitiful Texas Tech Red Raiders (17-15 overall, 4-12 in the Big 12) celebrating an invitation they’d done absolutely nothing to earn. When that starts happening, the regular season really will mean nothing.

Expansion supporters also claim that a 96-team field will create more opportunity for small conference teams. This misses the point. First, the NCAA’s motive is to clear more room for brand-name schools that will attract television audiences. It’s probably no coincidence that the current tournament is the first in memory not to include North Carolina, Connecticut or UCLA. With 96 teams, though, at least two of them would have been in.

Further, there just isn’t a need for the additional small conference teams that would also make it. No one loves the little schools more than me. (You can find my old Coastal Carolina sweatshirt hanging from the rafters of my local East Village sports bar, where I tearfully retired it after the Chanticleers choked in this year’s Big South title game.) But there’s good reason that the smallest leagues -- like the Big South – only place one team in the NCAA field. Generally, the small league teams receive No. 15 and No. 16 seeds in the bracket. And since ’85, No. 16’s are a combined 0-104 in the tournament. No. 15’s are 4-100.

This doesn’t mean small conference teams shouldn’t qualify. They absolutely should; March wouldn’t be the same without them. But it does mean that their leagues don’t warrant more than one bid. It’s also worth noting that just about all of the expansion in Division I -- the 50 or so new schools in the last 25 years -- has taken place in these small conferences.

There’s also the Butler argument. Expansionists point to the success of this year’s Butler Bulldogs, a Final Four participant from a mid-major league (basically: bigger than the Big South, smaller than the ACC) as proof that the field should grow. But mid-major conferences already can -- and often do -- receive multiple tournament bids. Sometimes, worthy mid-major teams are left out, but it’s not very common. Just look at Butler’s own conference, the Horizon. This year, the Bulldogs went 18-0 in the league and 28-4 overall. The second-place team, Wright State, went 12-6 and 20-12 -- which would barely be tournament-worthy for a major conference team. The Horizon got exactly what it deserved this year: one tournament bid.

For 25 years, making the tournament has meant that you achieved something substantial during the regular season. But starting next year, it’ll just mean that you finished in the top 10 of the Big 12.