Give the candy critters a crisp, glassy caramel shell. Go ahead, show them a little love 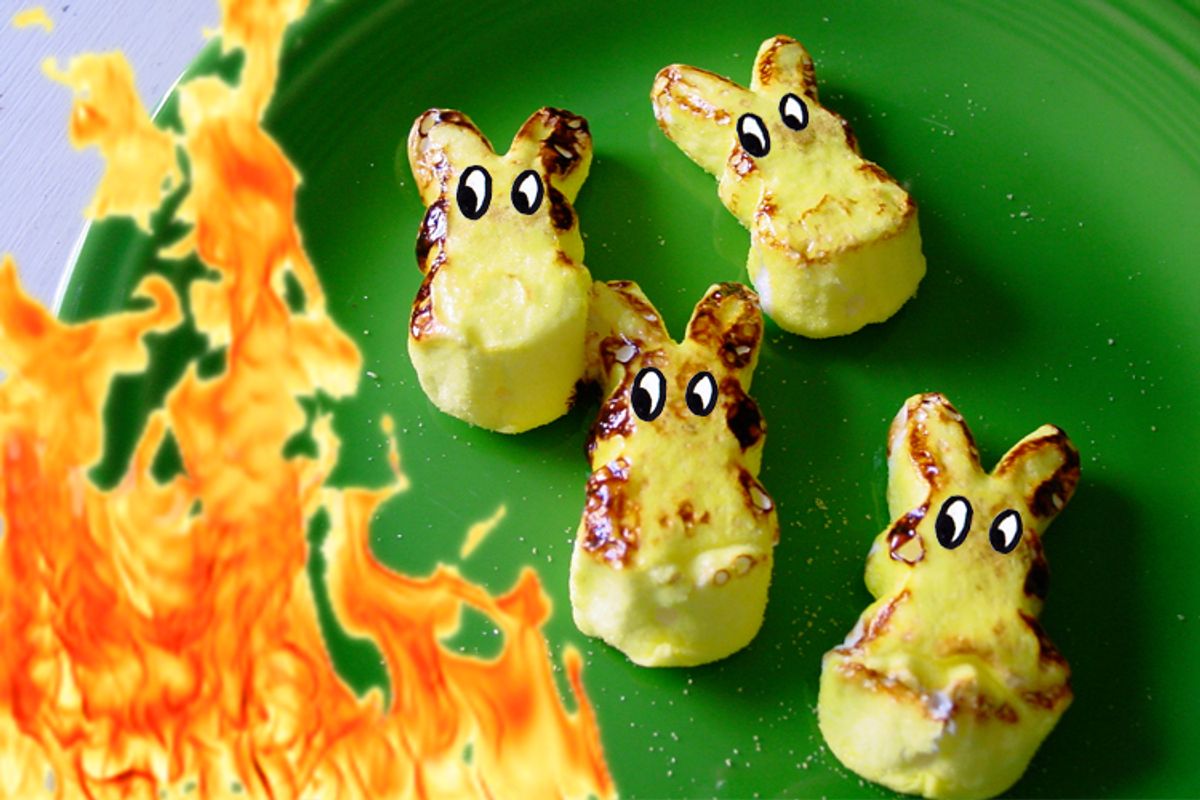 Before we start talking about torching up our Peeps, there are a couple of things you should know: 1) there's a lot of trial and error, and 2) someone will probably yell, "What the hell is wrong with you? You keep away from my kids, sicko!"

But you can calm them down, because you're just doing it out of love: Fire makes the sugar coating on Peeps get amazing, turning it into a glassy shell, all toasty and caramelly, a crackly crunch surrounding the soft, puffy marshmallow inside. Suddenly, everyone's favorite candy Styrofoam tastes sophisticated! So you know in your heart of hearts that you're subjecting these adorable critters to a flaming crucible because you just want them to be all they can be. OK, so that does sound kind of sick. Whatevs.

Anyway, as with crème brûlée, the magic is in the sugar and the heat. When dull, simple sugar gets hot, it breaks down and reforms on a molecular level, creating compounds that give us the nutty, buttery flavors of caramel. And as it cools, the liquid sugar turns into a new, solid crystal structure, which gets harder the hotter the sugar gets and the more it's allowed to sit still as it cools. (This is why hard candies like Jolly Ranchers and taffies can be still mostly sugar but have such different textures.)

So, for both crème and Peeps brûlée, the trick is to get the sugar coating hot enough to caramelize without cooking the custard or marshmallow underneath. If you have a brûlée torch, you can get flame serious enough to pretty much instantly melt and caramelize the sugar before the heat penetrates into the Peep itself and makes it puff. Check out this awesome picture, even though I'm pretty sure they're using a lightsaber, not a torch available on this planet.

But for those of us without pinpoint flamethrowers, you can still be in business as long as you have a gas stove and a skewer.

Peeps (I have a slight preference for the bunnies, but the chicks work too.)