Are tea partiers dragging down census response rates in conservative areas? If so, they're only hurting themselves 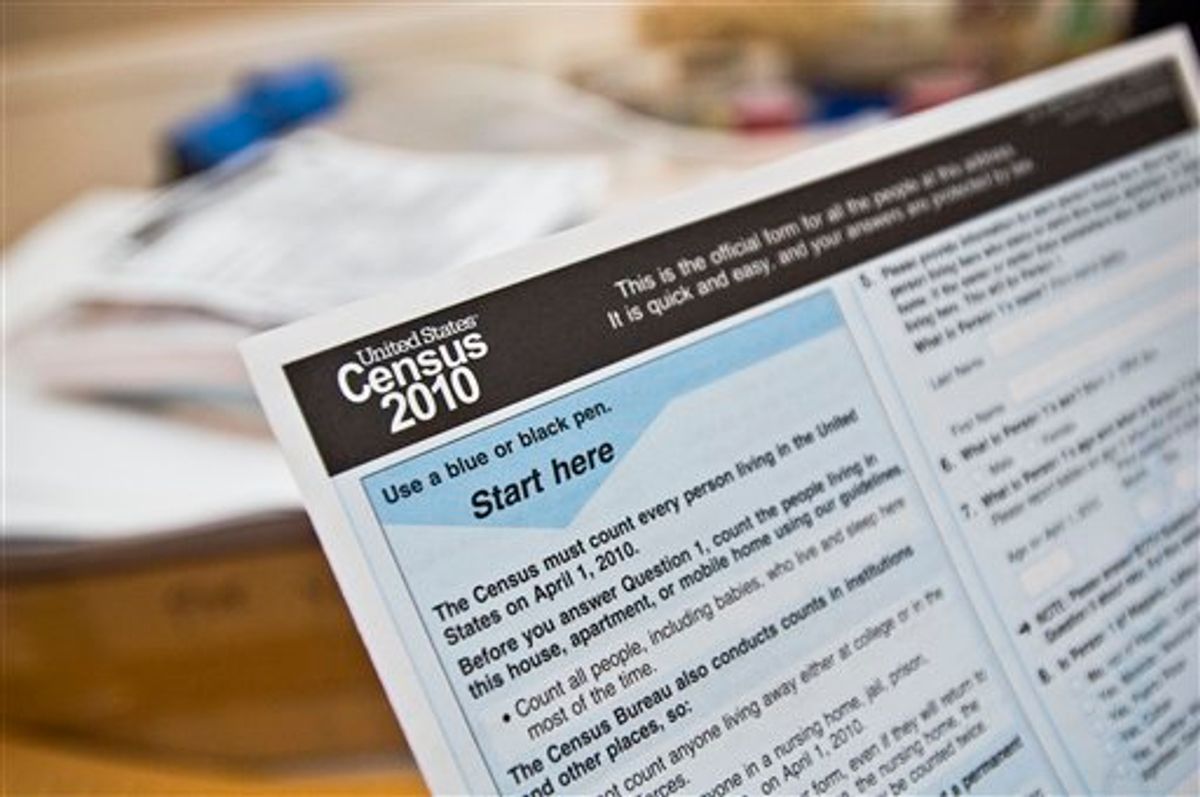 It'd be interesting to find out just how the tea party arm of the GOP decides what instances of federal power are unacceptable threats to liberty (healthcare reform), and which are just fine (Medicare). Maybe there's a dartboard?

It's been clear for a while now that the U.S. census is on the "unacceptable" list, but resistance to it was taking the backseat to the healthcare fight. With that over, conservatives are now free to freak out about the federal government gathering information on its citizens.

Although a decennial census is required by the Constitution, what libertarians and tea partiers object to is the amount of information being requested. As Rep. Ron Paul, R-Tex., puts it, "The census should be nothing more than a headcount. It was never intended to serve as a vehicle for gathering personal information on citizens."

It seemed like a decent guess that this would blow over -- and it still probably will. But there are some signs that response rates in conservative areas are unusually low. As the Wall Street Journal notes, only 48 percent of households in Texas and 53 percent in Alabama have mailed in their forms, compared to a national average of 56 percent, and Massachusetts’ 57 percent.

Within Texas, the pattern appears to hold up. A Houston Chronicle article on March 27 noted that the lowest return rates -- some rates in the single digits -- were coming from the state’s most Republican counties. This isn't exactly an airtight case for conservative nonparticipation, but it certainly raises an eyebrow.

It's worth taking a minute here to note that, in a funny way, census opponents have a point. It is unambiguously true that the census is integral to the functioning of the modern federal government, and that its growth runs parallel to, and enables, the growth of the bureaucracy. If they really think that we are anywhere near unacceptable levels of federal power -- as they obviously do -- then the census is, in a way, a logical target.

But as usual, of course, this cuts two ways: sure, anti-census conservatives succeed in diminishing the effectiveness of one of the government’s most important tools. In the process, they manage to discredit a basic federal institution among some members of their base.

At the same time, however, refusing to participate makes them less able to influence the outcome. In the healthcare reform fight, the GOP probably could have gotten more of what it wanted if members had been willing to deal. Instead they wrote off the whole exercise as some kind of socialist coup d'etat, and in the process probably got themselves a worse bill. The same is true here: if counties in the Texas panhandle actually do provide significantly inaccurate response rates, they will only be depriving themselves of political power. Conservative areas will be entitled to less representation at the state and federal levels, and less federal money, which they rely on whether they admit it or not.

It's easy to want to mock the right wing for its mistake here. But it’s worth thinking twice. What we've seen in the last year or two is the weakening of the commitments of the far-right to the basic procedures of American democracy. A decisive election was written off as a fraud; an ordinarily-legislated reform was transformed into some kind of fascist putsch. If the census offers a way for tea partiers to convince themselves of their ongoing victimhood at the hands of a nefarious, illegitimate system, then it's not obvious who the joke is really on.