So far Nevada Sen. John Ensign has evaded punishment for his misconduct. But his immunity may soon end 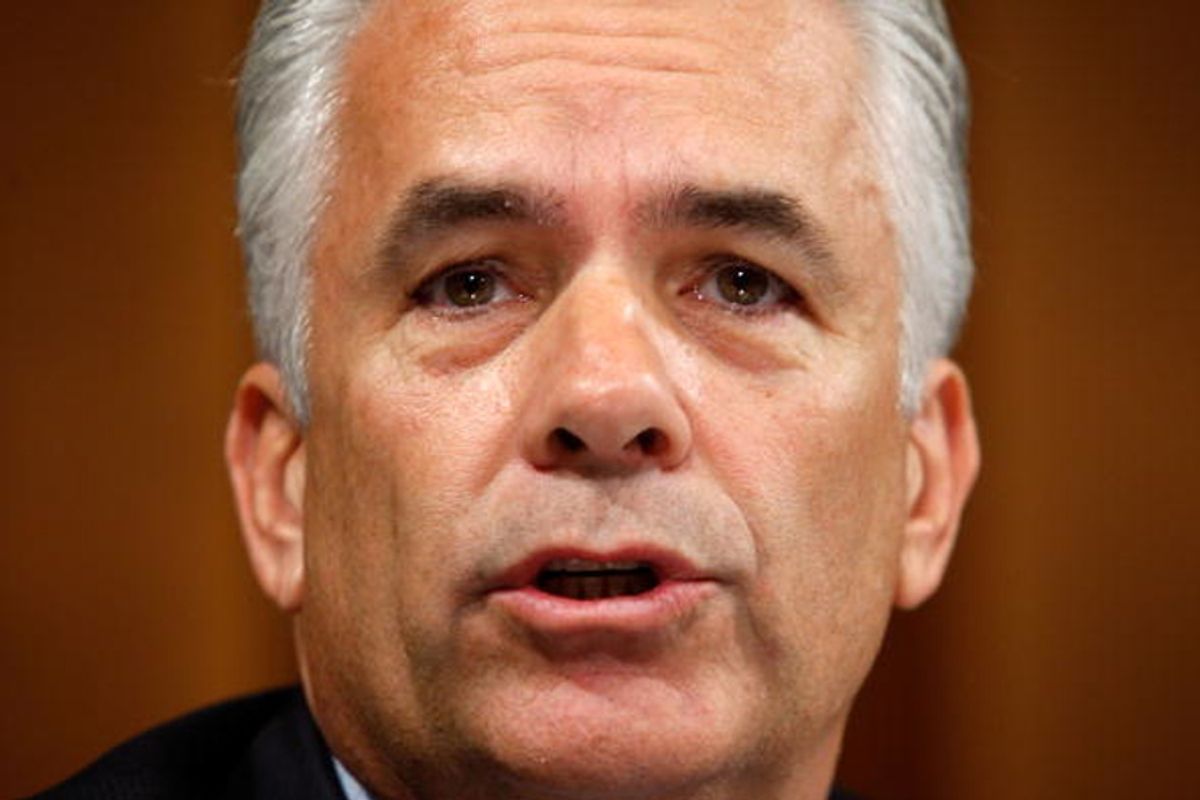 The distasteful saga of Sen. John Ensign, Republican from Nevada, adulterer and financial finagler, has been stuck in a strange state of irresolution since he confessed to an illicit romance with an aide's wife last summer. Constrained by Senate rules and customs, his colleagues say nothing, while the ridiculous Senate Ethics Committee does nothing.

Although he was forced to step down from the chairmanship of the Republican Policy Committee, few in the party leadership have criticized him or called for him to resign, even as the emerging story of Ensign's alleged financial and professional payoffs to his former lover and her family have raised questions of criminal misconduct.

The Justice Department began to probe those payoffs not long after initial reports that Ensign's parents -- wealthy owners of a casino resort in Nevada -- had given at least $96,000 to the former aide, Doug Hampton, and his wife. What the Ensigns called a "gift" might be viewed as something else by federal authorities.

But now the Las Vegas Sun reports that Justice Department officials are investigating whether Ensign and his family committed a financial crime known as "structuring." Structuring is essentially a form of money laundering -- consciously attempting to evade federal regulation and oversight by trickling out a series of smaller sums, for example, rather than one large payment.

Sun political reporter Jon Ralston says that is what he was told by "a reliable source familiar with the deliberations occurring inside the Justice Department as federal authorities in Washington try to do with Ensign what they could not do with former Alaska Sen. Ted Stevens: Get their man."

The national and Washington press corps have mostly allowed Ensign to skate while skewering Charlie Rangel, Eric Massa and other Democrats, but Ralston has led the way on this wild scandal from the beginning. His assessment of the prospects for the Nevada senator and his party is blunt:

That the feds are looking at structuring as a possible crime will not surprise many old hands who have watched the sordid Ensign saga play out, morphing from a fairly grotesque he-slept-with-his-best-friend's-wife-who-was-also-his-wife's-best-friend story to a fantastically creepy tale of a senator trying to keep the cuckolded husband quiet by any means necessary, including, perhaps, structuring transactions with businesses in exchange for campaign contributions.

The question is how Justice might, ahem, structure a deal with Ensign. It is clear from observers -- and from those who know the thinking inside the Justice Department -- that the Stevens debacle has cast a shadow over the Ensign case.

The department is being very deliberate in assembling a case against Ensign. But Justice has a mountain of documents and e-mails that, combined with the senator’s own admissions or statements in e-mails, would seem to amount to a formidable case. And last week’s New York Times story, showing how Ensign's contacts with a local company (similar to several other interactions), show how far the senator was willing to go to get Hampton work, mostly while he was employed by ex-Ensign aides who had formed a lobbying/consulting firm. The structure, so to speak, is becoming more transparent all the time.

This drip-drip-drip of revelation seems to have left Ensign unfazed, like a man who is slowly drowning but believes he can rise above it -- or, perhaps, deludes himself into thinking he can walk on water. But as Republicans here and in Washington play the pathetic see-no-evil, hear-no-evil, speak-no-evil game vis-a-vis Ensign, it is becoming more obvious that their craven behavior could be self-defeating.

Ralston even suggests that the Ensign affair, if and when an indictment results, might improve the poor reelection prospects of Senate Majority Harry Reid, D-Nev., who has long cultivated a friendly working relationship with his state's junior senator. The Republican candidates seeking to oust Reid both have "foolishly" said they would welcome Ensign's support. Among those who will privately laugh when Ensign is indicted or resigns is Bill Clinton. Ensign voted to impeach Clinton, called on him to resign, and was still insisting on his moral superiority to the former president on the day that he "apologized" for the "distraction" of his extramarital affair.