It's not just ideology that motivates women terrorists, a new book finds. It's physical, sexual and mental abuse 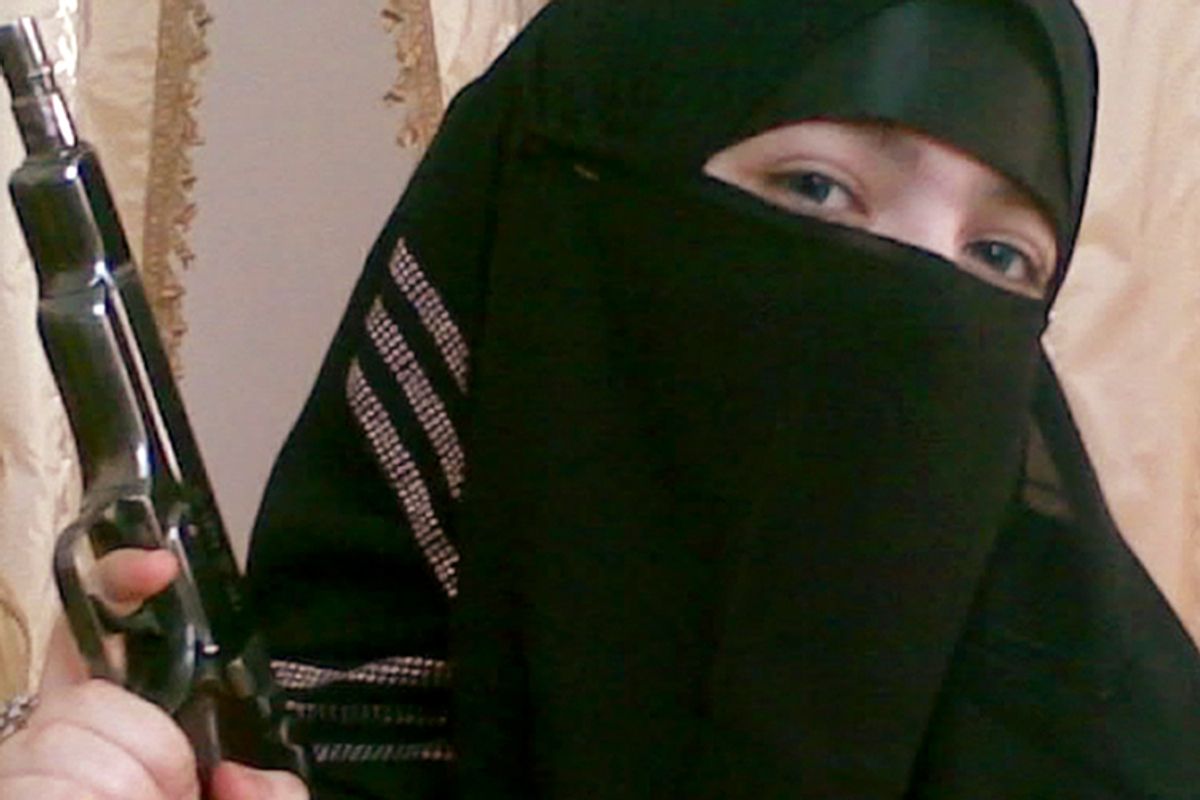 Dzhennet Abdurakhmanova, one of the March 29 Moscow subway suicide bombers.
--

This news story practically wrote itself. Within less than an hour on March 29, two Islamist suicide bombers struck the Moscow subway, blowing themselves to bits and taking 40 commuters with them. Their motive: Revenge for Russia's oppression of their Muslim brethren in the Caucasus. Clearly they were driven not only by hatred but also by ambition, machismo, testosterone, and the dream of 72 virgins in paradise, right? Except that this time the killers were two young women, one of whom – a Chechen widow called Dzhennet Abdurakhmanova – was only 17 years old. The pair has since joined the swelling ranks of female suicide bombers in Palestine, Iraq and now Chechnya. How does this phenomenon fit the alleged Muslim stereotype of women as subordinate, veil-wearing, second-class citizens? A new book promises to shed light on a troubling – and accelerating – trend.

Israeli scholar Dr. Anat Berko has been studying female suicide bombers for years. A former lieutenant colonel in the IDF, she holds a PhD in criminology from Bar-Ilan University and is a research fellow at the International Policy Institute for Counter-Terrorism in Herzliya. Her family is of Iraqi origin and she not only speaks fluent Arabic but is intimately acquainted with the Arab and Muslim outlook on life. Her new book, "Isha Ptzatza" ("The Smarter Bomb: Women and Children as Suicide Bombers"), will be published next week in Hebrew by Yedioth Books. She based it on hours of interviews with would-be suicide bombers held in Israeli prisons as well as on a close biographical analysis of Palestinian women who succeeded in their objective of killing as many enemy civilians as possible.

Berko's study, which is previewed in today's Haaretz, paints a disturbing tableau of the inner world of female suicide bombers, the vast majority of whom "were exploited by the terrorist organizations, by close friends or even by their own families, and were pushed into carrying out terrorist attacks." It appears that women's motives for such attacks are rooted less in ideology than in histories of physical, mental, and sexual abuse within their own families. Their motives rarely involve free will, but rather blackmail or the hope of redemption for sexual indiscretions through violence and self-sacrifice.

Berko cites the case of Palestine's first female suicide bomber, medic Wafa Idris, who blew herself up in downtown Jerusalem in January 2002, killing an 81-year-old Israeli man and injuring 100 bystanders. Berko focuses her attention on Idris's recent divorce: Her husband had divorced her after a miscarriage leaving her unable to conceive a child and married another woman, with whom he proceeded to father two children. Her spectacular suicide "redeemed" her from this perceived disgrace and inspired nine successful imitators during the Second Intifada. In Berko's view, female suicide bombings have as much to do with a sort of proactive "honor killing" as they do with classic (and stereotypical) "Islam vs. the West" terrorism.

But once captured and forced to justify their actions, these bombers consistently cite ideological motives. "[I]n prison, since they are now part of a group, these women are expected to rewrite their personal stories and to reconstruct them as acts of heroism on behalf of the Palestinian homeland," Berko writes. "Yet, there is almost always a complex family history involved. For instance, a divorced woman is in a very weak position in Palestinian society, and it is thus easy to recruit her. Many of these women have an absent father -- that is, the father is either chronically ill, dead or has other wives. One of the terrorists told me that, given her father's absence, she needed a man to defend her; in return for his protection, she assisted him in his terrorist work."

While female bombers cannot expect a reward as such, Paradise does have its consolations. Once there, some of them expect to be restored to youth and to become virgins once more with a free choice of husbands. "One of the women I interviewed told me that women do not menstruate in heaven," Berko writes. "The men always claim that they will father children in heaven but the women say that in heaven, they will not have to pray for children and will not have to give birth."

Berko has been covering this ground for years. Her dissertation, published in English in 2007 as "The Path to Paradise: The Inner World of Suicide Bombers and Their Dispatchers," uses case studies and exhaustive interviews to show how suicide bombers are recruited as "smart bombs" – as "a tactic of war" – by ruthless operators who pull their strings from the shadows. This earlier book also examines female bombers and contains a number of surprises. For example, far from being a "weaker sex," women who have committed themselves to carrying out suicide attacks can be even more ruthless than men. "While men consistently emphasize that they wish to spare women and children, female assassins focus specifically on these groups. It is an emotional rationale: if I can't have children, the Jews shouldn't have any either."

Shortly after Wafa Idris's 2002 attack, the Egyptian Islamist weekly Al-Sha'ab proclaimed: "It is a woman who teaches you today a lesson in heroism, who teaches you the meaning of Jihad, and the way to die a martyr's death ... with her thin, meager and weak body ... It is a woman who blew herself up, and with her exploded all the myths about woman's weakness, submissiveness, and enslavement." But sadly for Palestinian women, not even suicide bombing can elevate their status in this profoundly sexist society. Not only prison but death itself is regarded as a scandal. "Sheikh Muhammad Abu Tir, a leading member of Hamas in the West Bank, told me explicitly that his organization strongly opposed women's participation in terrorist activities," Berko writes. "He said that he would never allow his daughter to carry out a terrorist attack. One reason is a religious one -- the lack of modesty. Female terrorists disguise themselves as Israeli women and sometimes wear revealing clothes; in the eyes of Hamas members, their innocence is thereby compromised."

One male suicide bomber Berko interviewed in prison told her that "he was very angry with his sister who had tried to carry out a suicide bombing after she got a divorce. 'A woman must not expose her body,' he argued. 'When a woman blows herself up, not all the parts of her body become tiny bits of flesh.'"

Berko concludes: "Even after they have died, these women do not have full rights to their own body."