If the Web doesn't kill journalism, Michael Wolff will

How low can a news aggregating bottom-feeder go? Newser has the answer 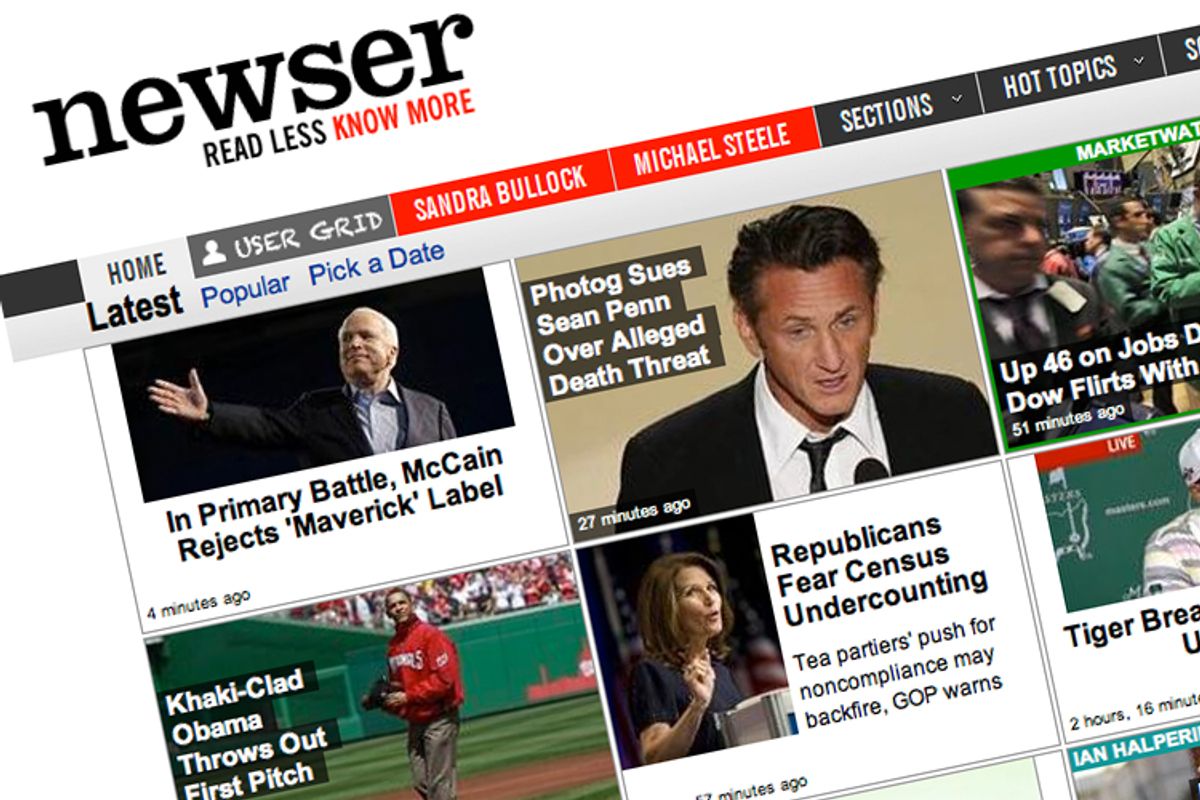 In the world of Web-based news aggregators, the competition for the title of lowest bottom-feeder is a ferocious sight to behold. But few would deny that Michael Wolff's Newser must be placed squarely in the middle of the conversation. A look at Newser's home page on Monday morning compels with all the sick attraction exerted by a semi jackknifing across the interstate, setting in motion a 20-car pileup.

There are two Sandra Bullock stories, "Bullock Fears Murder But Will File for Divorce," and "There's a Sex Tape ... Starring Sandra ... And It's Ultra Nasty," mixed in with your run-of-the-mill Pope sex scandal update and latest Michael Steele imbroglio. There are the required trashy slide shows, "7 Signs LiLo Is the New Britney" and "5 Other Celebs We Hated -- Temporarily" and straight-out titillation: "Maine Topless Protesters Draw Oglers."

And much, much more. But what takes Newser beyond countless other similar sites is a truly precious degree of shamelessness. All of the above stories -- even the slide shows -- are repackaged, rewritten and abbreviated versions of content originated by other publications. When your pursuit of traffic leads you to the point of ripping off a Fox News Lindsay Lohan/Britney slide show, you have stooped so low you can't even reach up to the lowest common denominator.

Newser doesn't try to completely hide its sins. The "sources" for its rewrites get a link, in a button to the right of the story, and sometimes, more appropriately, within the story itself. But that hasn't appeased the wrath of the operators of other Web sites who feel their content is being repurposed and appropriated in a fashion that goes far beyond what is considered acceptable in the world of Web-based journalism.

Via Felix Salmon comes the news that Sharon Waxman, founder of the entertainment news site The Wrap, has taken umbrage at Wolff and Co. She lays out her case here, and Wolff, wielding his poison pen as only he can, responds here. The gist: Waxman argues that Newser is free-riding off her content, to which Wolff responds, essentially: You use too many words, and we're doing the world a service by cutting you down to size.

Newser is hardly the first Web site to try to gin up a lot of traffic via sleazy aggregation. But the arrogance with which Wolff tries to pretend that what his operation is doing is some kind of evolutionary step forward in the news business -- "Read Less. Know More." -- deserves a special award for effrontery. On the Web, giving ample credit and linking to sources are essential steps in making this new Internet information ecosystem work for everybody. Newser obscures where the content it is appropriating comes from, adds zero editorial value, and even serves up advertisements when you try to leave the site after clicking on a link in the "source" box to see the original story!

You'd have to work hard to be more annoying. But if anyone can do it, it would be Wolff. To anyone who has followed Michael Wolff's career, as I have, with some astonishment, from failed Internet entrepreneur to New York magazine columnist to Vanity Fair columnist to a second stint as an Internet entrepreneur, there's nothing at all surprising about watching Newser's canker on the Web fester in such glory. But in tribute to Newser's business model, instead of creating a fresh new take on the wonder that is Michael Wolff's lifelong contribution to journalism, I will simply repurpose some 12-year-old Salon content -- two reviews I edited of Wolff's 1998 tale of Internet incompetence, "Burn Rate."

From Scott Rosenberg's "Money for Nothing":

It's difficult to argue with Wolff's conclusion that the Net industry is a con game full of posturing and lies, since he serves himself up as the damning evidence. He learns to play the game well (at one point he eludes an angry investor by pretending that his father-in-law is in the midst of open-heart surgery), but not well enough to retain control of his company or make off with the millions his banker had promised ...

Throughout, Wolff poses as a savvy journalist turned naive businessperson: In the techno-crazed world of the Net, we're to understand, he's the Man of Words, the writer who grasps the power of language and perspective and ideas. But the stuff Wolff's company was trying to sell during the period the book covers -- from those mountains of Net guidebooks to a Web personalization service called "Your Personal Network" -- hardly represented a revolutionary effort to bring the values of quality journalism to the online world. Wolff was producing hype-driven, highly perishable goods, just like the next Net huckster.

From Alexander Cohen's "Self Combustion":

Perhaps the most telling moment in "Burn Rate" comes a little more than halfway through the book. Michael Wolff, the aspiring Internet entrepreneur, has just succeeded in selling an essentially worthless database of information for "seven figures" to the computer magazine publishing company CMP. He and his lawyer wife, Alison, are discussing their unexpected and somewhat discombobulating coup. Wolff writes: "'Just think,' I said, warming to the moment, 'how many stupid people there are in this world who we can take advantage of ...'"

In "Burn Rate" the narrator doesn't just reveal his own neuroses and personality flaws -- he un-self-consciously exhibits all the naivete, foibles and amoral exhibitionism of Michael Wolff himself. Wolff's narrative audacity is stunning. He is, by his own account, a man who seems willing to break any promise, sell out his employees and do just about anything else to further his own selfish interests.

Twelve years later, has anything changed?

UPDATE: The related link to Michael Wolff's response isn't working, I am informed. But it is the first comment...