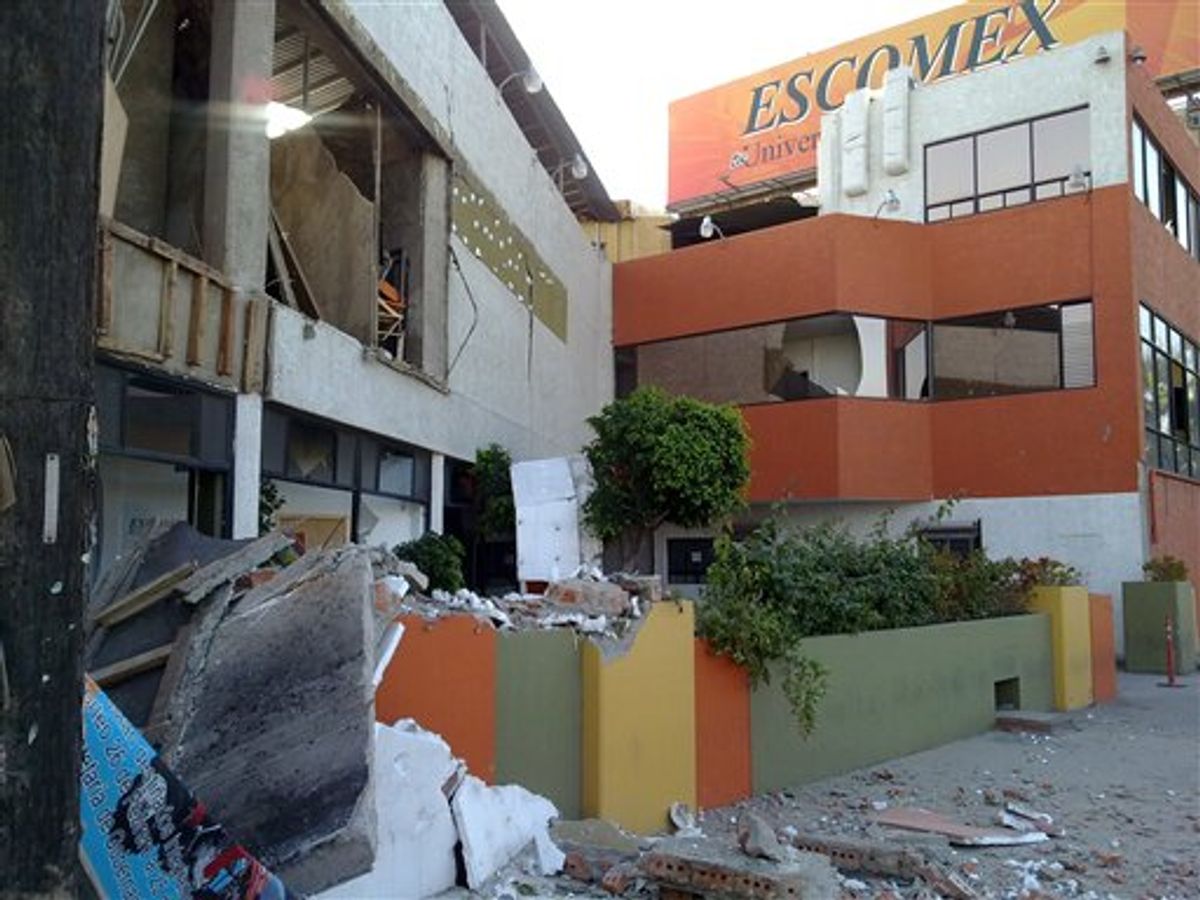 This photo provided by Jorge Rivera aka "cimarron98" via Twitter shows structural damage to the Escomex business school building after an earthquake in Mexicali, Mexico, Sunday, April 4, 2010. The 7.2-magnitude quake struck at 3:40 p.m. in Baja California, Mexico, about 19 miles southeast of Mexicali, according to the U.S. Geological Survey. (AP Photo/Jorge Rivera) NO SALES. (AP)
--

No injuries were reported in Calexico, the U.S. area hardest hit in the United States by the 7.3-magnitude quake. A 3-block-by-4-block area containing prewar buildings housing businesses was closed because of damage.

"There's broken windows, some cracked masonry buildings" and some buildings had falling bricks, although none was in immediate danger of collapse, police Lt. Jesus (hay-SOOS') Serrano said.

Damage was still being assessed, he said.

Sunday's quake centered just south of the U.S. border near Mexicali killed two people in Mexico and injured at least 100, including someone who was hit in the head by a sign at a carwash in the California town of El Centro.

At least a half-dozen aftershocks with magnitudes between 5.0 and 5.4 were reported, including a 5.1-magnitude shaker at 4:14 a.m. that was centered near El Centro.

"Aftershocks have become less frequent overnight and they will continue to do so over the next few days and weeks" but they could continue for years, she said.

Statistically, there will be one aftershock of around 6.0 and perhaps 10 of 5.0 or larger, she said.

Despite the jolting, Serrano said there were few emergency calls and no sign of panic.

"This area is prone to earthquakes and we usually have a lot," he said.

The initial earthquake downed three power lines, a gas leak forced a brief evacuation of about 30 homes, and residents were removed from a senior living center built in the early 1900s.

Electricity was restored to the city's southeast area after about four hours.

It was one of the strongest earthquakes to hit the region in decades.

"It sounds like it's felt by at least 20 million people," U.S. Geological Survey seismologist Lucy Jones said in Pasadena. "Most of Southern California felt this earthquake."

"It felt like I was in a canoe in the middle of the ocean," Garcia, 44, said of the temblor, which struck at 3:40 p.m. Sunday and was centered 19 miles south of Mexicali.

His wife, Elvia, 47, said her refrigerator door flew open and all the food fell out. Her plates, TV and computer all smashed to the floor.

Buildings shook as far away as Phoenix and Las Vegas, but most of the U.S. damage appeared to be limited to California's southeastern Imperial Valley.

In Nevada, the quake was felt in the fire and medical dispatch center in downtown Las Vegas, but there were no reports of damage or injuries, according to Tim Szymanski, a spokesman for Las Vegas Fire and Rescue.

Jacqueline Land said her king-sized bed in her second-floor Phoenix-area apartment felt like a boat gently swaying on the ocean.

"I thought to myself, 'That can't be an earthquake. I'm in Arizona,'" she said.