"Dancing with the Stars" recap: Pam gets smart

As the Kate Gosselin trainwreck chugs on, Anderson and Chad Ocho Cinco emerge as unlikely favorites 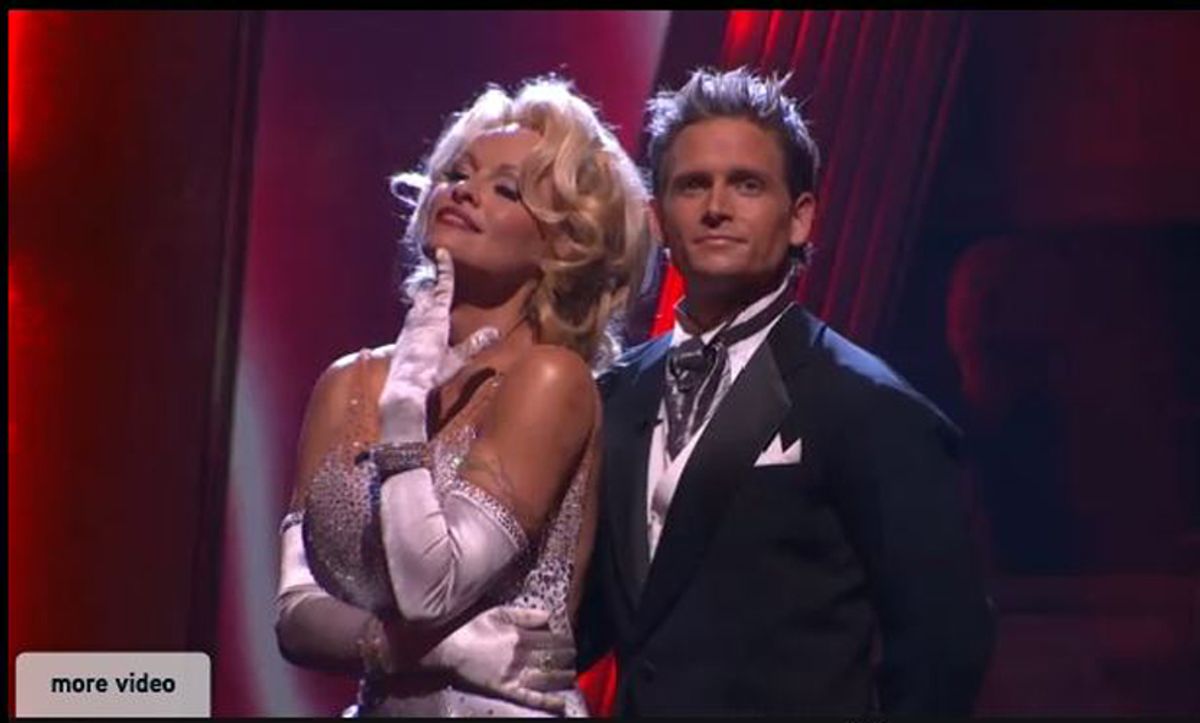 Sunday night, I celebrated the ascension of Christ at my friend's house by feasting on the lamb of God and drinking buckets of his blood before cursing his name all the way home with the worst case of hiccups I've ever had. I rode the Washington, DC metro, terrifying the few passengers who were still out and about at 11:30 with my abrupt noises and violent body convulsions. It's unsettling when you have no control of your body and feel that your very presence is causing needless anxiety, which is why I was nervous when I heard that the quickstep was part of the show tonight.

On my favorite dance show, "So You Think You Can Dance," they call the quickstep the "Kiss of Death" because it is intricate, quick and not necessarily as big a crowd pleaser as the more dramatic or romantic dances – so any couple who gets burdened with it usually ends up going home the next week. But it's storytelling night, and if 78 percent of Americans believe that whole "Christ rising from the dead" business, then it's certainly possible to get us to believe in a dance even when the steps are not accurate. Good thing, too.

Evan got it right. He always gets it right, doesn't he? If there's one thing that's going to bring Evan down, it's his deadpan personality, and the quickstep's not helping spice anything up for him. He danced it well, though, so I assume he's going to stick around for a while giving America time to decide if he's a dry wit or an arrogant bore. I'm still on the fence.

Critiquing Buzz Aldrin on his dance moves on this show has as much impact as judging Sarah Palin on her grasp of complex policy issues. It just doesn't matter – they are both going to succeed regardless, he because he is older than the hills and pulls at every clichéd sentimental string with each routine (father coming home from war and dancing with his daughter – hanky, please!) – and Sarah Palin because she's perky, feisty and has realized that uttering any canned anti-Obama sentiment is like catnip to Republicans, no matter how outrageous the claim. Buzz will keep lurching across the dance floor every week in his petrifying body – while dance partner Ashly twirls around him like Tinkerbell -- and Sarah Palin will be the Republican nominee for President in 2012. So it is written…

Ooh, we saw Jake almost go postal on Chelsea this week. That hokey chuckle is hiding a rage so deep and powerful that it will come spewing out in a volcanic cataclysm before this show is over. Can you see Chelsea begging for help behind that Cleopatra make-up? Soon she will be handing small, quickly-scribbled notes to production assistants with cryptic messages like, "If anything happens tell my mother that I love her" or "Make sure chompers goes to my sister." Oh, it's coming my friends. But in the meantime they danced a passable quickstep that will keep them in the competition as Jake's seemingly guileless laughter washes over the women of middle-America like scented Renuzit air freshener. Don't be fooled, ladies.

Leave it to Niecy to dance one for the gays. And in memory of how it was for interracial couples who were not allowed to love freely in their day. The dance itself wasn't that great, but it didn't matter in a completely different way than Buzz's dancing never matters. Buzz is immune largely because of the nostalgia he evokes from a simpler time, while this week Niecy and her partner channeled the well of pain and sadness that comes from being hated for loving in our time. Thanks for the love, Niecy, and for the tears. You're a class act.

I get it now – the appeal of Chad. In my original preview of the show, I lumped Jake and Chad in the same bag of douche – Jake for being a big old fake and Chad for having a monster-sized ego. But as the weeks have gone by, Chad has opened up and shown personality, wit and humility while Jake continues to stuff every genuine emotion he's feeling in allegiance to his "boy next door" brand. And the cracks are starting to show. Chad and Cheryl (side note: Is it me, or does Cheryl look 100 times better this year? What's new here?) danced a Paso Doble, and the judges were supportive. I think he's going to be around for a while.

Pamela finally dropped the sex kitten routine (well, kinda) after ending up in the bottom two last week, while her partner Damian amped it up. Charo dropped by to lisp a few tips on how to do a hard-hitting Paso Doble when one is carrying around boobs the size of Snooki's poof in the front: "Look into the camera," purred Charo, "since you can't see your feet anyway." Perhaps this week the women who've hated Pamela for those boobs and the men who've dismissed her for being stupid will finally see a sweet and talented woman who deserves their votes. Doubt it,though. They're all still voting for Jake.

He's so good looking. And he's English. And he brought his cute little baby to the studio. So, even though the dance sucked, he checked off every box for the Hugh Grant-loving female demographic, which should be enough to stick around.

I have moments where I feel for Kate Gosselin, but only when the wounded little girl inside of her peeks out from behind her facade for 30 seconds each segment. The rest of the time, she is playing out a bizarre opera on the national stage in which she seems to be punishing the rest of us for the fact that she's "not allowed to show emotion" or "nobody's ever given me a chance" or "it's been a tough year." And for some reason we're tuning in. Perhaps it's because on some level we know that the pressure cooker is building steam, and we want to be there when it blows. We need our Britney-shaving-her-head moment, if that's the only payoff we get for putting up with her -- because we are sure not getting anything through the dance. In this routine, she stumbled toward her dance partner, who played the part of a paparazzo, like a demented blonde Elvira on Quaaludes. It's not getting any better than this, folks. I don't know who is voting for this woman, but if it's you please stop and let her go home before she starts speaking in an English accent and takes a baseball bat to Bruno's car.

So, the Lord of the dance is risen!  Evan takes over this week as the new leader of the scoreboard, displacing the Pussycat Doll. Although she and her partner danced like professional cruise ship entertainment, they violated the close hold and lift provisions of the quickstep, and nothing gets dance judges' panties in a twist more than that -- especially the crotchety English ones. Len seems to have replaced "American Idol's" Simon Cowell as the nasty Englishman who raps America's collective knuckles every week, making us wince and beg for more. Oooh, daddy!

I have no idea who's going home this week, as I still haven't figured out how the judges' votes even matter. The viewers' favorites are probably staying in. And since the least popular people seem to be the best dancers, it is still anybody's game.