"The Shield" actor talks about his newest alter ego: "Pantheon" hero and king of the Greek gods, Zeus 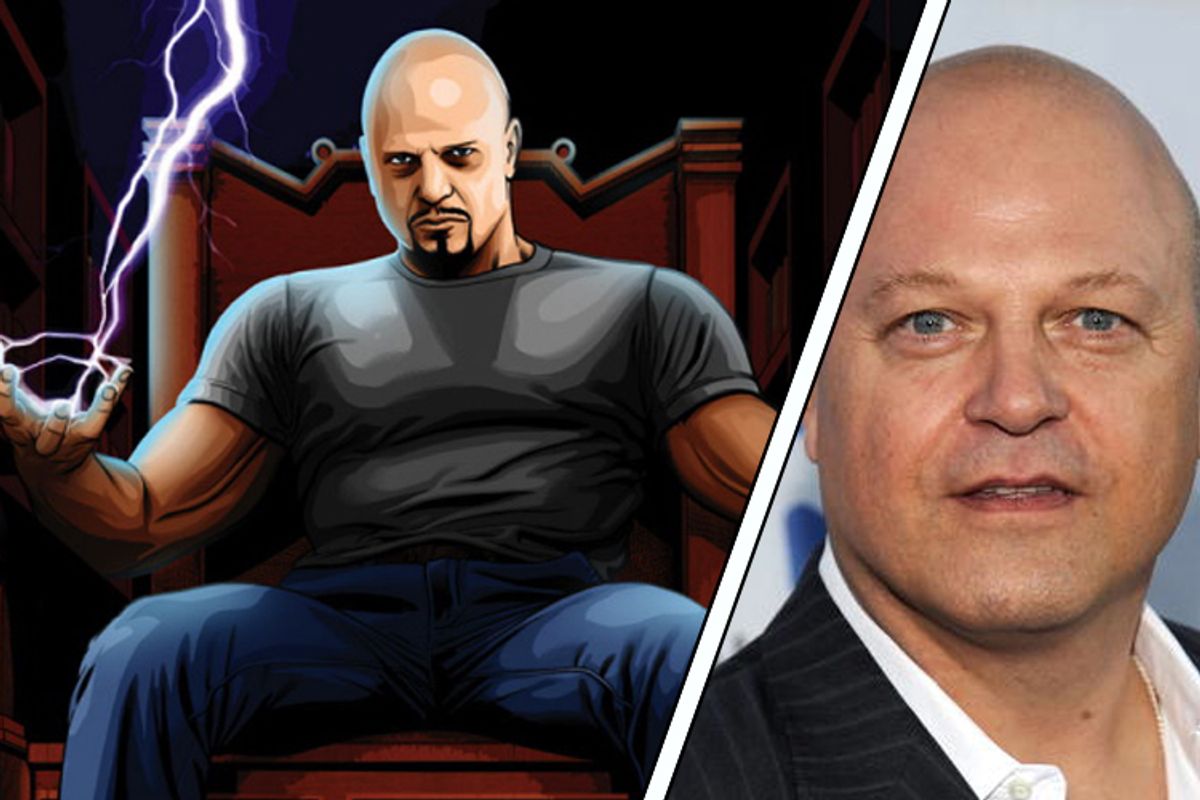 Comic books have been steadily losing floor space and prominence at their own conventions to the hyping of Hollywood blockbusters. In recent years, the San Diego Comic Con has become more associated with celebrity sightings of such A-listers as Johnny Depp or Denzel Washington than with fanboys getting their stack of bagged and boarded comics signed by their favorite artists. Comic Con's little brother WonderCon in San Francisco is no different. Kicking off day two of WonderCon on Saturday afternoon, movie buffs and celebrity stalkers packed the Esplanade Ballroom at Moscone Center to see Jake Gyllenhaal drum up interest in the slick video game adaptation "Prince of Persia" and Nicolas Cage do the same for his upcoming turn as a magical mentor in "The Sorcerer's Apprentice." While both fantasy films are definitely of interest to comic book fans, their connection to the original four-color, pulpy inspiration for these conventions is looking more and more tenuous.

While Gyllenhaal and Cage came to WonderCon to promote their latest films, TV and movie star Michael Chiklis was there on Friday to launch an actual comic book. Chiklis is best known for busting down doors and skimming drug money as everyone's favorite corrupt cop, Vic Mackey, in "The Shield" or for playing the orange, rock-covered Ben Grimm in "The Fantastic Four" movies, but now his likeness has been forged into a modern-day version of the Greek God Zeus on the cover of his new comic book titled "Pantheon" from IDW Press. On the cover of Issue 1, a throned figure that looks very much like Vic Mackey glowers at you while lightning emanates from his right hand. If there's anything that's scarier than Mackey with godlike powers, I don't know what it is.

"It's not a bad idea to make yourself into a comic character," Chiklis joked during an unmoderated, early evening panel discussion with "Pantheon" scripter Marc Andreyko, a writer best known for his work on DC's "Manhunter" and "Torso," a graphic novel retelling of the Cleveland Torso Murderer who dismembered Ohio drifters in the mid-1930s. "Pantheon" is set in the near future where Miami is half-submerged due to melting polar icecaps and Olympian gods battle the ancient Titans as the world edges into Armageddon.

"I've always wanted to do something in the area of the Greek gods," Chiklis said during a quick interview following the panel discussion, "but so many people were doing projects that really dealt with the classical Greek gods and I always thought of doing something with the Greek gods in a modern context." (When Chiklis mentioned his Greek heritage during the panel discussion, fans in the conference room quoted "300" by yelling, "Sparta!" This was, after all, a comic book convention.)

After Chiklis developed the idea with his collaborator Anny Simon Beck, he "went through the arduous task of looking for the right writer." He arrived upon Andreyko. "There were certain people's work that I liked," Chiklis explained. "Marc Andreyko is one of them. I got into his series 'Torso.' That caught my imagination. I thought that was really well done."

"(Marc) was knowledgeable about the pantheon of Greek gods and the titans and also really thrilled with using it as a jumping off point to tell a bunch of different stories," Chiklis added.

From the outset of the interview, Chiklis' nervous publicist urged him to get to the IDW booth on the convention's main floor where a long line of fans had gathered to get their signed copies of "Pantheon." I asked him if we could talk a little bit more as we walked to his signing and he obliged me. With his steely blue eyes and wearing an open leather jacket and a gray T-shirt, he looked just like Vic Mackey. I half expected him to clue me in on the Armenian money train heist or how to shake down corrupt Mexican land developers. Instead, I asked him about his relationship with comic books.

"I was a huge Marvel fan growing up," Chiklis said as we sidestepped a roving squad of stormtroopers. "I loved Thor and Captain America and Iron Man and the Fantastic Four, naturally. They've always been part of my life.

"And then for a long time I got so busy with my career, [comic books] were sort of in the periphery for me in my life, but I always stop and pick something up that was new."

Although Chiklis wants to make "Pantheon" a "great graphic novel" and promises not to put his name on it and forget about it, the potential for a film franchise is never far from the actor's mind. "That was definitely behind it from the beginning," he confessed. "I can't lie."

"Now we've got to the point where the technology has leapt forward where I almost feel like I'm 14 again," the TV star turned comic creator enthused. "It's cooler than ever now. You can actually do in a film what is there on the page. You can achieve that and more and that's exciting."

On that note, Chiklis and I arrived at the IDW booth where a Parthenon's worth of fans cheered his arrival. As he turned to thank me for the interview before meeting his public, I once again felt as if I was looking into the gaze of a mythic character such as Vic Mackey or maybe even the post-apocalyptic version of Zeus the thunderbolt thrower.

AUTHOR'S NOTE: I scored a really good interview with "Enter the Dragon" and "Black Belt Jones" star Jim Kelly, where we discussed the early days of martial arts in America, working with Bruce Lee and blacksploitation movies during their heyday in the 1970s. I'll have this interview up later this week.