How to connect mining disasters and climate change 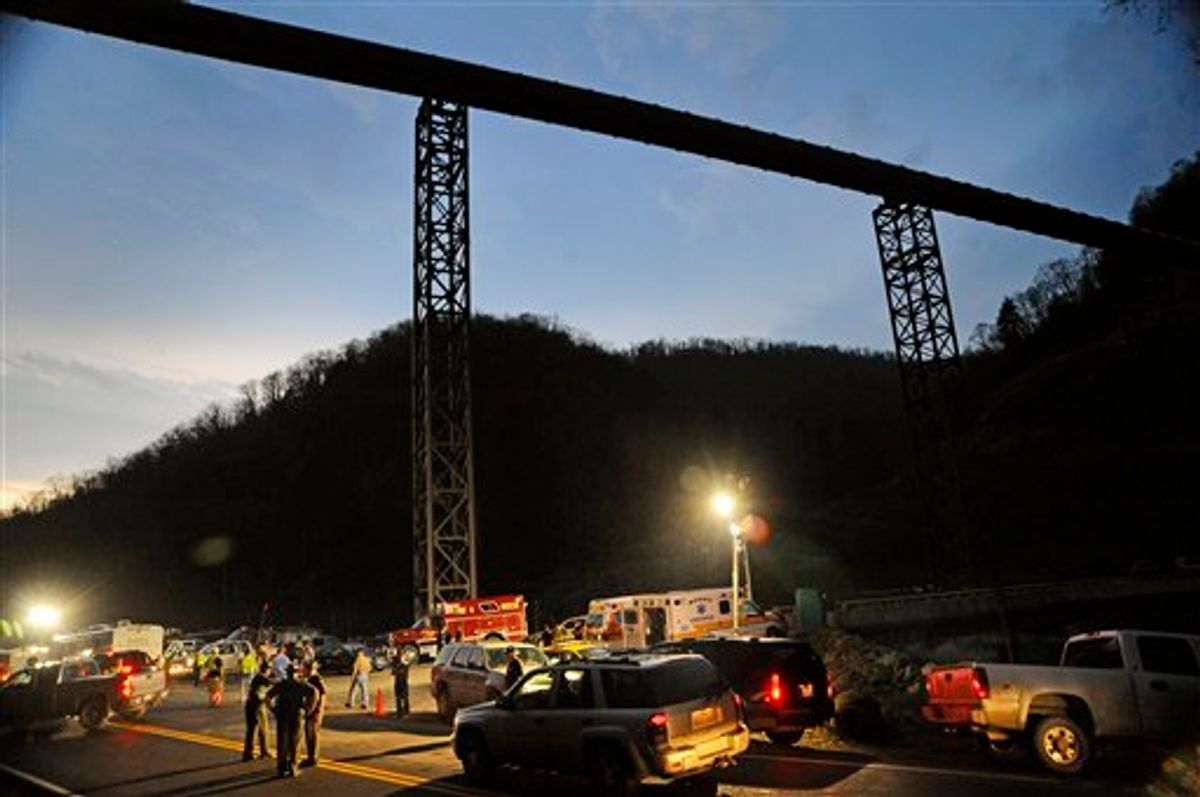 Immediately following the West Virginia coal mine disaster that killed -- so far -- 25 miners, the owner of the mine, Massey Energy, released a statement from CEO Don Blankenship that included the following sentence:

"Our top priority is the safety of our miners and the well-being of their families."

Some residents of Central Appalachia could be excused for scoffing. As the L.A. Times reports, federal officials have "repeatedly cited" Massey for safety violations. In 2009, reports the New York Times, the mine registered 458 violations.

And then there's the famous memo sent by Blankenship in October 2005 to all "Deep Mine Superintendents."

If you have been asked by your group presidents, supervisors, engineers, to do anything else other than to run coal (i.e. - build overcasts, do construction jobs, or whatever) you need to ignore them and run coal. This memo is necessary only because we seem not to understand that the coal pays the bills.

Mine "overcasts" are critical to proper mine ventilation, and for many miners, Blankenship's memo made it abundantly clear exactly what Massey's "top priority" was, and is.

But it's no news to anyone that the mining industry has historically resisted regulatory efforts that would increase safety but potentially reduce profits. Massey, as one of the nation's largest coal operators, is a flash point of concern for this classic dynamic, but no different in principle from any other corporation that cuts corners in pursuit of profit.

But what might be more interesting is to connect the dots between Massey's safety record, and CEO Blankenship's positions on energy policy and climate change.

Blankenship has a Twitter account. He hasn't tweeted in the last week, but it's the real thing, and prior to late March, he, or someone acting on his behalf, was fairly active, addressing "issues broadly affecting the American economy, worker (sic) and environment."

If you follow that link you will find a letter addressed to Senate Majority Leader Harry Reid, signed by 22 senators, calling for "comprehensive clean energy and climate legislation this year with a renewed focus on jobs and reduced dependence on foreign oil."

And so it goes. Judging from his tweets, Don Blankenship doesn't believe humans are contributing to global warming -- or even that global warming is happening. His tweet-stream offers a steady flow of climate skeptic talking points and slaps at Al Gore or any politician who supports cap-and-trade. His suggestion for encouraging job growth is to grant more mining permits. (Massey, incidentally, is a leader in the practice of mountaintop removal coal mining.)

Actually, I don't know what Blankenship really believes. But Massey's safety record and its CEO's position on energy policy both intersect at one point -- anything that threatens the profitability of "running coal" must be opposed, whether that's the science of climate change or building the appropriate number of mine overcasts.

Environmentalists are often criticized by conservatives for embracing the science of climate change because it fits neatly with their ideological positions on conservation and sustainability. I think there is certainly some truth to that. But I'd argue that there is even more truth to the opposite position: Energy company executives and the politicians who carry their water reject science and oppose energy legislation because it conflicts with their ideological belief that anything that interferes with private profit-making is evil government intrustion.

The wonder of Massey's Don Blankenship is how consistent he is. Whether the problem is properly ventilating a mine, or keeping the entire atmosphere of the globe stable, he's sticking to his guns. If it will hurt his bottom dollar, he's opposed.