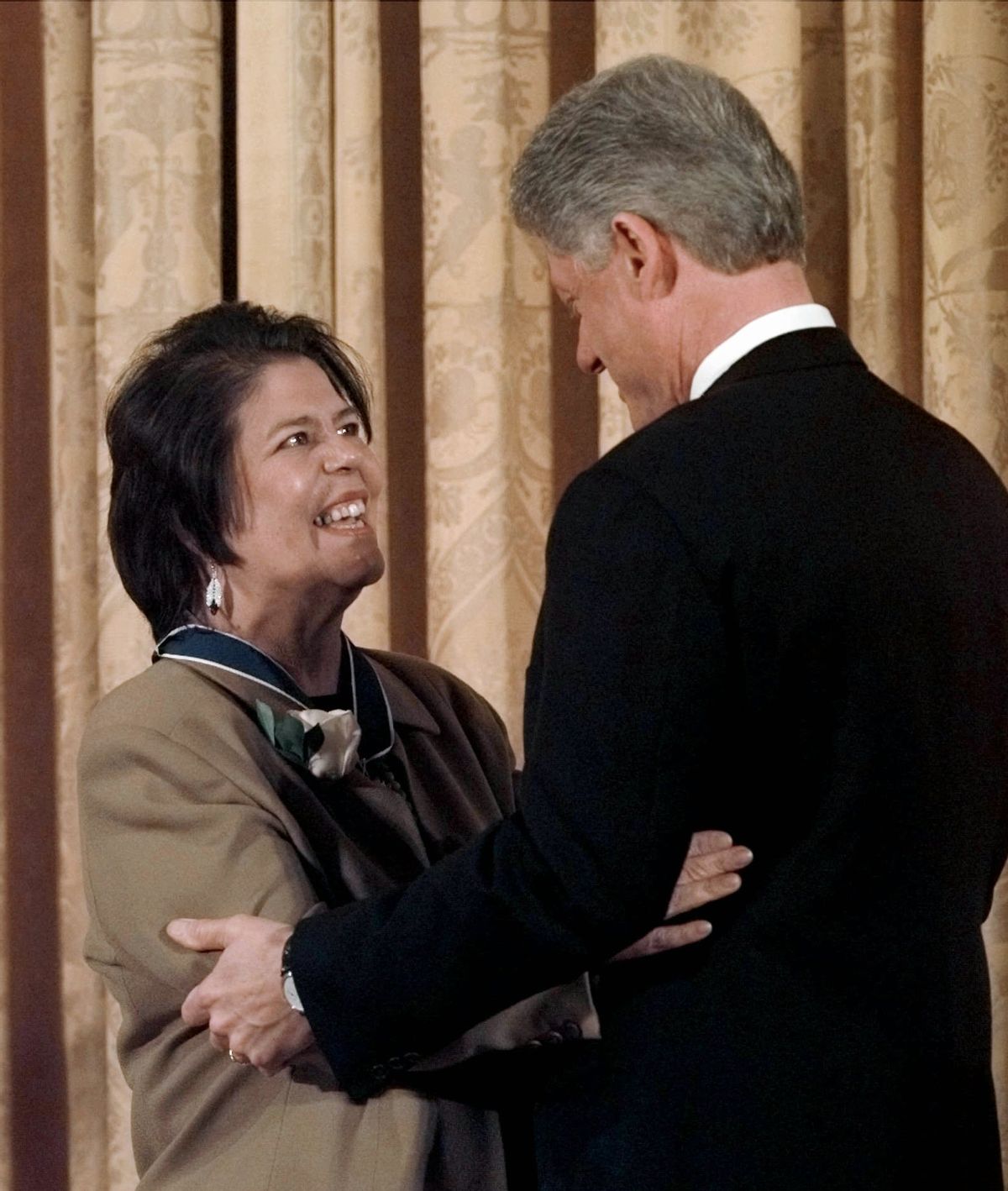 FILE - In this Jan. 15, 1998 file photo, President Bill Clinton hugs former Cherokee Nation chief Wilma Mankiller after presenting her with a Presidential Medal of Freedom during a ceremony at the White House. Mankiller, one of the few women ever to lead a major American Indian tribe, died Tuesday April 6, 2010 after battling pancreatic cancer. She was 64. (AP Photo/Dennis Cook, File) (Associated Press)
--

Sad news this afternoon: Wilma Mankiller, the first female chief of the Cherokee Nation, has died from pancreatic cancer at 64. Mankiller, who was Deputy Chief from 1983 to 1985, and then Principal Chief from 1985-1995, revealed that she was fighting the disease just last month.

According to the New York Times, the Cherokee Nation tripled in size in the decade that Mankiller served as chief; during her tenure, employment within the tribe doubled. Mankiller was awarded a Presidential Medal of Freedom by Bill Clinton in 1998 and was inducted into the National Women's Hall of Fame in 1993. She was an author, a lecturer and a feminist friend and hero to many, including Gloria Steinem, who last month told the Los Angeles Times that in a just country, Mankiller would have been president of the United States.

When her husband Charlie Soap announced in March that Mankiller was battling cancer, he released a statement from the former Cherokee chief in which she said, "I want my family and friends to know that I am mentally and spiritually prepared for this journey; a journey that all human beings will take at one time or another . . . On balance, I have been blessed with an extraordinarily rich and wonderful life, filled with incredible experiences . . . I will be spending my time with my family and close friends and engaging in activities I enjoy."

The current Principal Chief of the Cherokee Nation, Chad Smith, issued a statement today in which he said, "We feel overwhelmed and lost when we realize she has left us but we should reflect on what legacy she leaves us. We are better people and a stronger tribal nation because her example of Cherokee leadership, statesmanship, humility, grace, determination and decisiveness." There will be a memorial service for Mankiller this weekend at the Cherokee Nation Cultural Grounds in Tahlequah, Oklahoma.