What reality TV can teach you about your boss 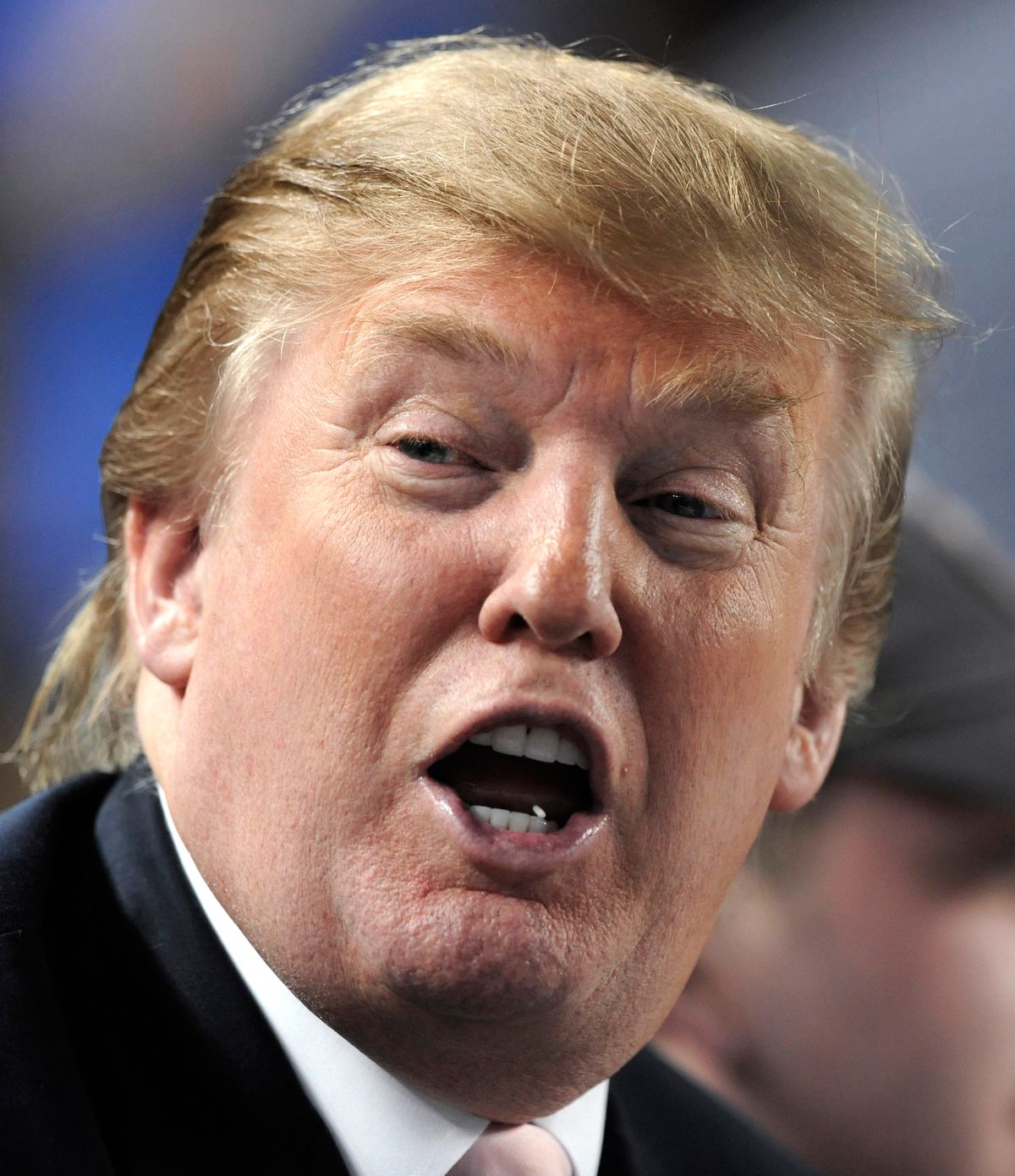 The bossman cometh! Reality TV now offers a glimpse at the professional ego heretofore unseen by the masses. Of course we already know, from our own workplace experiences, how the elite professional keeps up a winning streak indefinitely: By being an insufferable control freak, by demanding too much from underlings, by embracing the life of the workaholic, by staying busy at all costs, always assuming that busy-ness can offset any down-tick in importance, fame and/or fortune.

These grating professional pathologies aren't so fun at close range, as we scamper around in bad shoes, Xeroxing invoices or updating Excel charts or fetching no-foam triple nonfat lattes for those smug, eternally bloviating sons of bitches. But when we can take them in from a distance, armed with a good beer and flanked by a few friends who distrust money and power as much as we do (even as we hunger for it like the simpering dogs that we are), these strange tics translate into sheer entertainment. Who knew that, on our television screens, the dysfunctional affectations of the professional class would delight us quite so much?

In case you're personally climbing the ladder to success, fabulosity, fame and fortune, and wonder if you yourself might slowly but surely be morphing into some hideous, aloof yet insecure, narcissistic yet deflated, manic, delusional, drooling three-headed hydra who naturally oppresses everyone within spitting distance?

You most definitely are. Release the Kraken!

1. The elite professional turns friends and colleagues alike on and off like tap water. Remember tap water? That toxic liquid that busy hothouse professionals never drink anymore, for fear of getting some rare form of toe cancer they read about on the treadmill one morning, right before tweeting about Rachel Maddow's new hairdo? Well, elite professionals encounter other human beings as if they're faulty faucets. The bossman walks up, makes a joke, turns on the faucet, expects a few jokes to come out, but then immediately begins cringing and grimacing when the faucet starts spouting an anecdote about her crazy mother. Turn it off! Turn it off! His face says. I've got important phone calls to make and important YouTube videos to watch right now! Noticing all this flinching, the faucet ceases to spew, and our fearless professional moves on to More Important Things. (If you find your boss's impatience with conversational turns he didn't initiate unnerving, just imagine how his wife or kids must feel.)

Similarly, Chef Tony Mantuano is bewildered by his inability to control his partner, Chef Susan Feniger, on "Top Chef Masters" (premieres 9 p.m. Wednesday, April 6, on Bravo). Mantuano, who, in a moment of self-branding inspiration instructs us to "think of [him] as the Ferrari of Italian food," says that Feniger makes him "nervous," and while she has a great sense of humor, he worries that she may have trouble getting serious when it's time to work hard. Presumably the Ferrari of Italian food is more accustomed to solemn, respectful silence in his vaunted kitchens. But the need for control is shared by both partners. "Tony cooked for my favorite president ever, Obama," Feninger says, "but our styles are absolutely opposite."

But then, forcing smug elites to work this closely with each other may be the single greatest victory of the professional-class reality TV show, if only to watch these self-satisfied giants squirm. Hell, just making Michael Kors and Nina Garcia sit right next to each other on "Project Runway" feels daring to the point of being slightly dangerous. In this age of the huge professional ego-brand, proximity alone can set off an ego clash of the titans heretofore unseen by mortal eyes.

2. The elite professional transcends the laws of time and space. Remember the olden days, back when simple folks built fires and ate grilled meats without tweeting about it? Back then, humble savages marked the passage of "time" by making little slashes on cave walls, and nobody had any lip balm. These days, the busy professional reapplies lip balm every few minutes to prevent having an unsightly chapped mouth while speaking to enormous rooms full of people, yet she can't for the life of her recall what bearing the rules of time or space have on her own erratic navigation through the universe, nor can she conceptualize the limitations time/space might place on her underlings' assignments. The laws of physics, for the busy professional, are simple: If you produce x this week, then next week you'll produce 2x, the week after you'll produce 3x, and all deadlines = ASAP. Yes, that's right. The more you succeed now, the more you will eventually fail and disappoint your overlords later. In fact, this win-lose formula is the very foundation of any free market society!

We often see this bending of time and space on "Celebrity Apprentice" (9 p.m. Sundays on NBC), where the show's enormous egos either collide colorfully or they appear to occupy separate realities simultaneously. On a recent challenge, Olympic gold medalist Michael Johnson rolled his eyes through a meeting as Brett Michaels talked a mean streak without listening. Brett: "I felt that the executive meeting was the most connected I ever felt to Michael. We're on the same team!" Michael: "You've gotta be kidding me." But once you're a member of the successful elite, silly things like time, space, gravity and reality melt away like triple-crème brie on the crusty baguette of life.

3. The elite professional's attempts at pretending to care become less and less convincing. Caring isn't quantifiable and is therefore highly overrated. Human beings may begin work at a new job feeling seen, heard, appreciated and lauded for extra efforts, but over time, the ability of the bossman or bosswoman to exert the energy necessary for such games of make-believe far outweighs the benefits of doing so. After all, two or three years into the job, you'll be rumored to have a "mortgage" to pay plus "children" to support, burdens that the powers that be recognize will keep you cemented in your cubicle doing shit ASAP, around the clock, the specter of a crumbling economy and rising unemployment constantly stirring up the fear in your heart. Since fear is a far more effective motivator than "caring," no boss-type-person will be holding your hand or expressing their gratitude until you aim a gun at their heads (hence the current popularity of this option). Besides, your bosses are far too busy buttering up their brand-new underlings to bother with the likes of you.

"Do you see the way everybody's jockeying for position?" asks Sharon Osbourne, trying hard to scowl menacingly behind her apparently Botoxed face on a recent episode of "Celebrity Apprentice." "We're probably going to end up really disliking each other," she adds, neglecting to mention that most of the members of the women's team disliked each other within an hour or so of first meeting. But is there any other possible outcome among such elaborately coiffed ladies, whose egos are so enormous that they haven't pretended to care about other human beings since back in the days when their heads were still made of compostable, organic materials and they could still, therefore, express emotions like "concern" using a few key facial muscles?

4. The elite professional expects your masochism to match his/hers. It's no secret that successful professionals find personal relationships vaguely distasteful. After all, these "friendships" and "intimate" alliances don't offer the same ego rewards found in the elite corridors of one's industry, where the practice of stroking each other's egos is as mandatory as a firm handshake. In order to remain unencumbered by the giant time-suck of friends and family (inconvenient humans who are far less likely to agree with you or laugh heartily at your bad jokes), busy professionals work 24-7. Once this becomes "normal" to them -- an illusion they enforce by spending their limited free time with other elite professionals -- they expect everyone under their power to maintain similarly punishing schedules without complaint. Preposterous? Maybe. But remember, in today's troubled economy, simply refusing to grab ankle marks you as a troublemaker.

On "Celebrity Apprentice," former pro baseball great Darryl Strawberry's lack of interest in tackling one infomercial of a task after another quickly made him unpopular among his peers. Strawberry most likely tried to explain it all to his teammates during one of his smoking breaks ("I'm a former professional baseball player, people. I spent 17 years sitting around chewing tobacco with my buddies for a living.") But the high-strung, high-maintenance busybodies of "Celebrity Apprentice" were alarmed by his laid-back attitude, and Strawberry eventually asked to be fired. "Quitters never win!" they all whined as Strawberry exited the building, but the quitters at home know that losing is often far more relaxing than winning could ever be.

5. The elite professional encourages "brainstorming" then shoots down all ideas that don't suit his/her personal tastes. You're probably too young to remember this, but in the olden days, human workers once attended "meetings" where everyone sat at an oblong table and feigned interest in each other's bad ideas. Imagine! Not only that, but free sandwiches were often served! These days, of course, the busy professional relies on teleconferencing software or Skyping, enabling telecommuters to join in meetings where they're encouraged to "speak up" and voice their "opinions" and give "feedback" and throw out "ideas" -- all of which are promptly proclaimed unrealistic, impossible, or hopelessly off-topic. Thank you for sharing -- now please shut up and let me talk.

"I know you better than you know yourself," Donald Trump tells Michael Johnson during one boardroom session, a breathtaking demonstration of how deeply the elite professional believes in his own omnipotence. Why waste time getting input from other human beings, when they aren't all-seeing and all-knowing like you are?

Of course, part of the appeal of the wildly popular new show "Undercover Boss" (9 p.m. Sundays on CBS) is the illusion it creates that the bossman is actually interested in the perspectives of lower-ranking employees. Take President and COO of Roto-Rooter Rick L. Arquilla, who poses as a low-level employee, tangles with raw sewage, and then tells the camera that he gives a damn, damn it. He even tells one employee, through tears, that the man's fight against alcoholism inspired him to reconcile with his alcoholic father, and that he'll be "forever grateful" to that employee as a result. The moment really warms your heart ... at least until you remember that it's all an elaborate publicity stunt by a corporate entity anxious to appear aligned with working people at a time when the public is momentarily concerned with their welfare.

But don't worry, marketers and publicists of the world! We'll all go back to obsessing about the latest Fendi bag as soon as the economy rebounds. In the meantime, though, we should all beware the elite professional, on the prowl in our towns and cities like never before! They'll fake appreciation, steal your best ideas and bleed you dry until you're a sorry little shadow of your former self. Then, when you're crumpled up and useless from years of being overworked, they'll fire you. Welcome to high capitalism, suckers!