On an episode devoted to the songs of Lennon and McCartney, Casey James and Tim Urban finally prove they're worthy 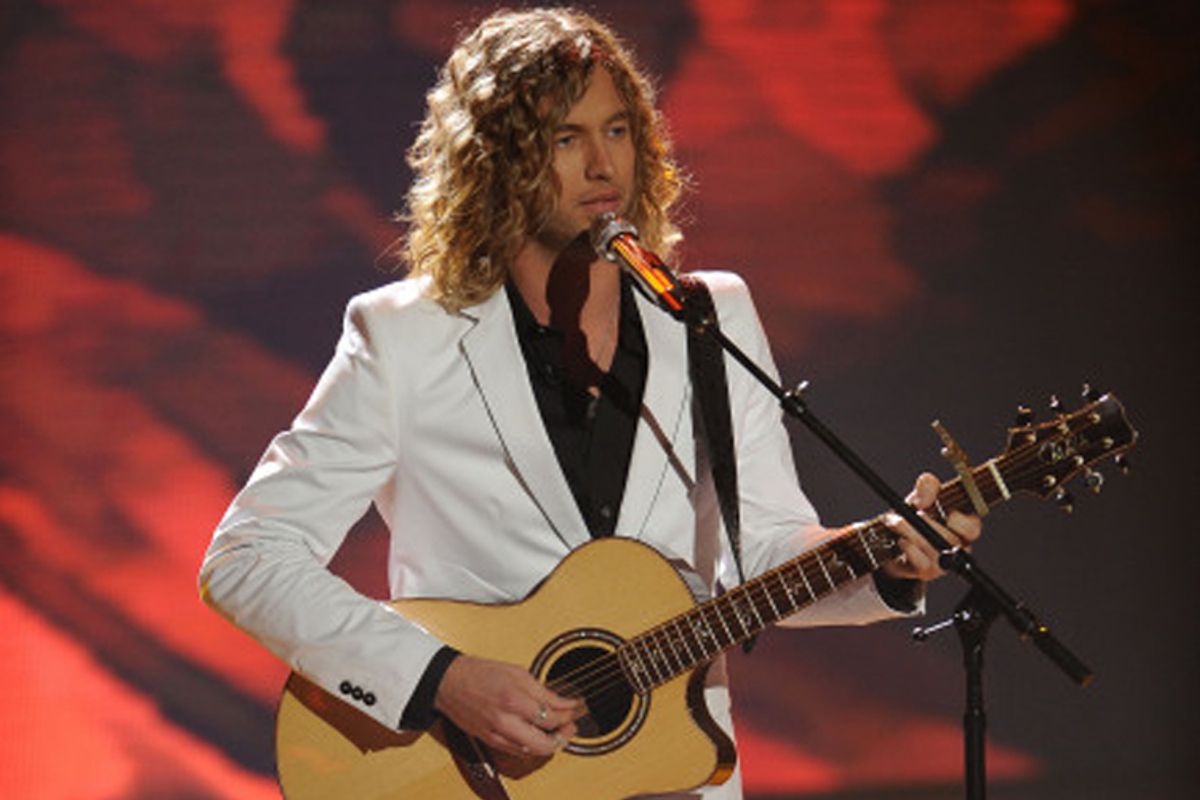 Tuesday's  "American Idol" featured songs by John Lennon and Paul McCartney, including a video greeting from none other than McCartney himself. I entered the night with the slightest ray of hope. (After all, it's spring.) Not the kind of blind hope that would lead one to believe that the contestants had magically become talented since last week, but rather hope with a lowering of expectations and the fantasy that surely a few of them could do something with one of the dozens of amazing Beatle songs they had to choose from.

Sneak hope preview: Fantasies can become reality! Tim Urban pulled off the impossible. He sang on key for starters… more about him later.

The judges were introduced, and clips of the contestants talking about each other's personalities, quirks and temperaments were interwoven throughout the show. I won't bother with relaying any of their boring blathering. Think Juvederm: This stuff was pure filler.

First up was Aaron Kelly, who sang "The Long and Winding Road." It was more like a dead end. Seriously. This kid, who looks a lot like Linus, is all of 17 years old. The show must be taking years off of him. He sounded tired and old.  His vocals were average and, at times, pitchy (yes, Randy has finally worn off on me). Another predictably lousy start for season nine's top nine. I drank coffee and Red Bull in abundance. It was going to be a long and hard day's night.

Ellen: "That song was a long and winding road." Another original, witty remark by Ellen. Not.

Simon: "Aaron, why did you choose that song and arrangement?"

Aaron, who suddenly was clutching a security blanket retorted, "Because this journey has been a long and winding road."

Simon and I both rolled our eyes at the exact same time.

Simon:  "I wish I hadn't asked that. You're 17, old-fashioned and boring. You should have done some research on that song. You've got to be young and relevant."

Aaron rolled his eyes and left the stage sucking his thumb.

Katie Stevens was all pretty in pink and sang "Let It Be." Katie's voice was amazing. This bottom-three girl clawed her way to the top in just one week with her standout performance.  Katie had the voice of a woman: deep, sultry and mature, and she didn't make the mistake of trying anything fancy. She let her voice do the talking for her.

Randy, Ellen and Kara loved it.

Simon: "Katie, tonight you got it right. You got it right because you were leaning in the direction that I was hinting at which is more country. It felt like you were singing about somebody rather than being robotic."

The Three Stooges went ballistic and adamantly disagreed with Simon, and I hate to disagree with Simon, it's such a rare event, but I was with them. What was Simon talking about?

Ryan played the unsuccessful mediator: "Which country is Simon speaking about?"

A commercial broke the tension and the imminent brawl was averted. This show could turn into a WWE event.

Andrew Garcia sang "Can't Buy Me Love," and I was distracted by his bright yellow shirt and big glasses. He looked like he was in a Buddy Holly time warp. Maybe Andrew's consolation prize could be a lifetime supply of hair mousse. The arrangement sounded nothing like a Beatles song, but more like something right out of "Laugh In." Andrew was mediocre. He said hello and I said goodbye.

Kara: "I want to love it, but I haven't seen anything new from you. You could have done more with the interpretation."

Simon: "When you go to a wedding and the guitarist, not the lead singer, sings a song, it was like that. The problem with the performance was that the band was overpowering the arrangement and made it corny and old-=fashioned and irrelevant. You and the band got it all wrong tonight. Sorry."

Michael Lynche: "Big Mike" sang "Eleanor Rigby." With all the epaulettes on his jacket, he might have been better off singing a Sgt. Pepper's Lonely Hearts Club Band song. But he did take "Eleanor Rigby" and "make it his own." Aside from the annoying and distracting secret hand signals he was sending his wife in the audience, I liked it. He had a great voice and knew how to connect with the audience.

Simon: "I didn't love it as much as the Three Stooges, but this was the sort of thing you see in musicals. I don't think it made you contemporary… it made you go backwards. Too over the top, and I'm slightly confused as to what kind of artist you want to be".

Crystal Bowersox sang, "Come Together." Her song started off with a guy playing the didgeridoo (think Australia). Crystal, as always, stayed true to herself and did things her way. The arrangement was unique, and I liked it, but it didn't close to some of her other great performances. There were times she sounded screechy to me, and I worried she might be hanging out with Siobhan too much.

Kara: "I think this is one of my favorite performances of yours. You made the song, it had a Bonnie Raitt feel, it was slinky, sexy, playful, you were smiling. You were more accessible tonight."

Simon raved about her performance and thought the guy playing the didgeridoo, Ernie Fields Jr., was amazing. That didgeridoo guy got more kudos than most of the contestants.

Tim Urban, season nine's Sanjaya, sang "All My Loving." Listen, do you want to know a secret? Tim was actually good (remember, the expectations had been lowered). He actually looked like a Beatle with his new hairdo. His voice was on key, his guitar playing worked, and he was cool, confident and boy did he have fun!

Randy: "Yo, Tim, you're in like your own category. Is it a good Tim performance? That was a much better performance than the last couple of weeks. And hey dawg, your hair was 'Beatleish.'" Randy made up a new word.

Simon: "Tim, I have to judge you on everything we've heard and seen tonight. I thought you did really well tonight with that song. What I liked about it was there were no gimmicks, it was the right thing to do, just you and the guitar. That song sounded very current, and what I like about you is you take the criticism like a man. You've been given a great opportunity, and if you have to take a few barbs along the way, so what? This is a shortcut to fame. You've done well, I'm proud of you." Tim, loved by all the contestants for his big smile, smiled broadly.

Casey James, A.K.A. "Goldilocks," sang a John Lennon solo track, "Jealous Guy." Casey stepped up the competition a few notches with his interpretation. He was soulful, emotional, and his voice displayed great range. It was my favorite performance of Casey's, and he clearly beat the unbeatable Crystal.

Kara: "Casey, what you showed us tonight was a vulnerability which has been lacking. You were very tasteful on the acoustic. It showed depth, and that's what I wanted to see." Kara had gotten rid of her schoolgirl crush and finally became a judge.

Simon: "Goldilocks, I think it was the best performance of the night so far. A big difference between last week and the week before. You put your stamp on the song. I was very very impressed with you tonight." Yeah, you and every woman and gay guy in America.

Siobhan Magnus, dressed like Glinda, the good witch, sang "Across the Universe." Talk about a big change from last week. Where was the screeching, the screaming? Siobhan looked like Jack Nicholson at the end of "Cuckoo's Nest." Clearly she'd either had a lobotomy or was on heavy-duty tranquilizers. I had a hard time hearing her. To say that her singing was understated is an understatement.

Randy: "It was a little sleepy, but I liked the whole tender side thing."

Ellen: "I am a big fan of people who march to the beat of their own drums. and I support that, I honor who you are. You are special." Ellen reminded me of parents like me who gushed all over our children, gave them trophies for being on the little league team and brushing their teeth and brainwashed them into believing they were truly unique, which turned them into spoiled, entitled, unemployed adults with really good self-esteem.

Lee Dewyze, the last contestant, sang "Hey Jude." Now, Lee went along just fine with his signature raspy voice, but for me it sounded a bit mashed together and off-key at the most inopportune moments. But it was still a solid performance UNTIL… what was this? Coming down the stairs in back of Lee was a bagpiper. Yes, a bagpiper. I was seriously concerned about my vision and mental health. But there he was. A bagpiper? There should have been a bagpiper down, or better yet none at all. As I write this, I'm still confused as to the reason and logic for this bizarre addition to Lee's song. Was Jude Scottish?

Ellen: "Even when the kilt guy got separated from the parade, you didn't get rattled by him. Good for you."

Simon: "I don't know what you are all drinking in the house. First a didgeridoo and now a bagpiper. I don't know what's going on. No disrespect to you, but I wouldn't have done that. You were doing great and then the bagpiper swooped down the staircase. It was like he was on the wrong show. Who planned this?"

Lee took 100 percent responsibility. For that alone, Lee should be voted off.

All in all, Tuesday night's show wasn't horrible, and this came as a pleasant surprise. It was mildly entertaining and less cringe-worthy than the past weeks have proven.

Cause for hope? No. But given that "Dancing with the Stars" is now more popular than "American Idol," we might finally have some kind of competition on our hands. Oh, how the mighty have fallen.

My top three: Casey James, Crystal Bowersox and Tim Urban. Just kidding! Katie Stevens. It's too insane to have "Tim" and "top" in the same sentence.