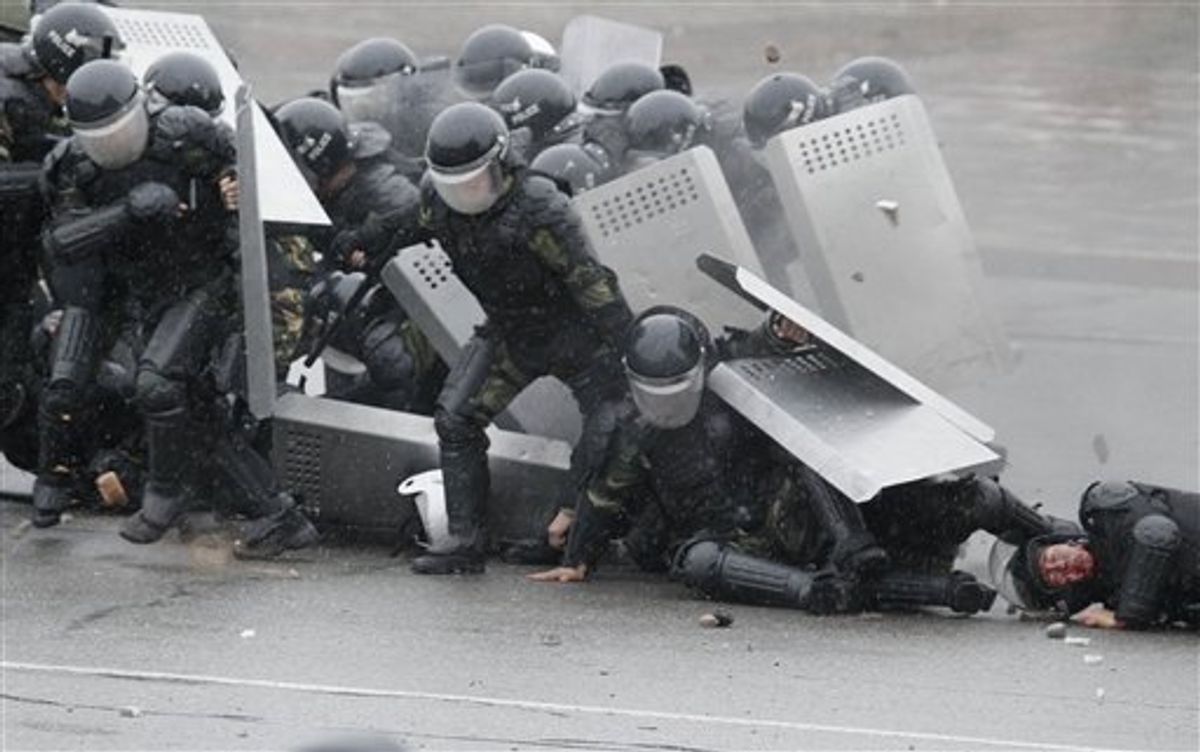 Kyrgyz riot police come under attack from demonstrators in Bishkek, Kyrgyzstan, Wednesday, April 7, 2010. Police in Kyrgyzstan opened fire on thousands of angry protesters who tried to seize the main government building amid rioting in the capital as protests spread across the Central Asian nation. (AP Photo/Ivan Sekretarev) (AP)
--

An opposition politician has seized the headquarters of a branch of Kyrgyzstan's security forces -- the first concrete sign that a violent uprising is now in charge of the Central Asian nation.

An Associated Press reporter saw opposition leader Keneshbek Duishebayev sitting in the office of the chief of Kyrgyzstan's succesor agency to the Soviet KGB, issuing orders on the phone to people Duishebayev said were security agents. He also saw Duishebayev giving orders to a uniformed special forces commando.

Duishebayev told the AP that "we have created units to restore order" on the streets. This mountainous former Soviet republic houses a U.S. military base that is a key supply center in the fight against the Taliban in nearby Afghanistan.

The eruption of violence shattered the relative stability of this mountainous former Soviet republic, which houses a U.S. military base that is a key supply center in the fight against the Taliban in nearby Afghanistan. The unrest in Kyrgyzstan did not appear likely to spread across former Soviet Central Asia, however.

The chaos erupted after elite police at government headquarters in the capital, Bishkek, began shooting to drive back crowds of demonstrators called onto the streets by opposition parties for a day of protest.

The crowds took control of the state TV building and looted it, then marched toward the Interior Ministry, according to Associated Press reporters on the scene, before changing direction and attacking a national security building nearby. They were repelled by security forces loyal to President Kurmanbek Bakiyev.

Since coming to power in 2005 on a wave of street protests known as the Tulip Revolution, Bakiyev has ensured a measure of stability in this predominantly secular Muslim nation, but many observers say he has done so at the expense of democratic standards while enriching himself and his family.

Over the past two years, Kyrgyz authorities have clamped down on free media, and opposition activists say they have routinely been subjected to physical intimidation and targeted by politically motivated criminal investigations. Many of the opposition leaders once were allies of Bakiyev.

Anti-government forces have been in disarray until recently, but widespread anger over a 200 percent hike in electricity and heating gas bills has galvanized the fractious opposition.

Temir Sariyev, an opposition party leader, told The Associated Press that "the prime minister has submitted his resignation, and the entire government is also resigning." Sariyev earlier announced a coalition of opposition politicians had agreed on a new prime minister as well as a new interior minister and new security chief.

The claims could not immediately be confirmed.

An Associated Press report saw dozens of wounded demonstrators lining the corridors of one of Bishkek's main hospitals, a block away from the main square, where doctors were unable to cope with the flood of patients. Weeping nurses slumped over dead bodies, doctors shouted at each other and the floors were covered in blood.

Kyrgyzstan's Health Ministry said 40 people had died and more than 400 were wounded in clashes with police. Opposition activist Toktoim Umetalieva said at least 100 people had died after police opened fire with live ammunition.

Opposition activist Shamil Murat told the AP that Interior Minister Moldomusa Kongatiyev had been beaten to death by a mob in the western town of Talas where the unrest began a day ago. The respected Fergana.ru Web site reported later that Kongatiyev was badly beaten but had not died, saying its own reporter had witnessed the beating.

The unrest began Tuesday in the western city of Talas, where demonstrators stormed a government office and held a governor hostage, prompting a government warning of "severe" repercussions for continuing unrest.

The opposition called nationwide protests for Wednesday and police in Bishkek at first used rubber bullets, tear gas, water cannons and concussion grenades to try to control crowds of young men clad in black who were chasing police officers, beating them up and seizing their arms, trucks and armored personnel carriers.

Some protesters then tried to use a personnel carrier to ram the gates of the government headquarters, known as the White House. Many of the protesters threw rocks, but about a half dozen young protesters shot Kalashnikovs into the air from the square in front of the building.

"We don't want this rotten power!" protester Makhsat Talbadyev said, as he and others in Bishkek waved opposition party flags and chanted: "Bakiyev out!"

Some 200 elite police began firing, pushing the crowd back from the government headquarters. The president was not seen in public Wednesday and his whereabouts were unclear.

Protesters set fire to the prosecutor general's office in the city center, and a giant plume of black smoke billowed into the sky.

Police often appeared outnumbered and overwhelmed, sometimes retreating when faced with protesters -- including many armed with rocks and others who appeared to be carrying automatic weapons as they marched.

At one point police fled across the square from a large group of stone-throwing demonstrators. In another street, a small group of police took refuge behind their shields as one of their colleagues lay unconscious at their feet, his face smeared with blood.

In another area, two policemen, their faces bloodstained, tried to escape as a protester aimed kicks in their direction.

"Look here, young people. We all are poor, no jobs," said one of the demonstrators, who identified himself only as Zhildysbek. "They are shooting at people. You can see for yourselves. After that, I think, there will be blood for blood."

Groups of protesters then set out across Bishkek, attacking more government buildings.

At least 10 opposition leaders were arrested overnight and were being held at the security headquarters in Bishkek, opposition lawmaker Irina Karamushkina said.

One of them, Temir Sariyev, was freed Wednesday by protesters.

The U.S. State Department called for peace and restraint on both sides.

The prime minister, meanwhile, accused the opposition of provoking the violence in the country of 5 million people.

Unrest also broke out for a second day in the western town of Talas and spread to the southern city of Naryn.

Another 10,000 protesters stormed police headquarters Wednesday in Talas, where on Tuesday protesters had held the regional governor hostage in his office.

The protesters beat up the interior minister, Kongatiyev, and forced him to call his subordinates in Bishkek and call off the crackdown on protesters, a correspondent for the local affiliate of U.S.-funded Radio Free Europe/Radio Liberty said.

In the eastern region of Issyk-Kul, protesters seized the regional administration building and declared they installed their governor, the Ata-Meken opposition party said on its Web site.

The leaders of the four other former Soviet republics in the region were certain to be watching events in Bishkek with concern, but the authoritarian, and in some cases dictatorial, natures of their governments would likely allow them to squash any attempts to challenge their rules.