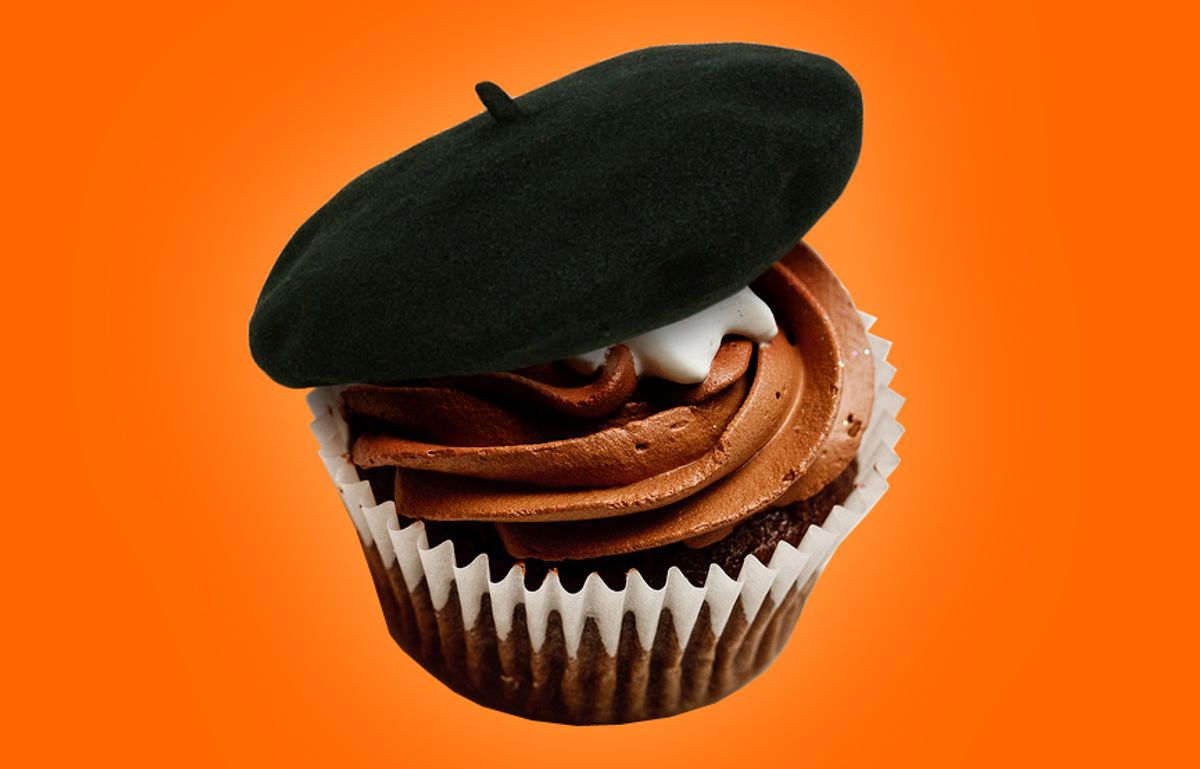 Nearly a decade after the upscale cupcake craze began sweeping America, the tiny frosted treats are finally reaching their tipping point on the other side of the pond. In recent years, the desserts have become popular everywhere from Berlin, whose first cupcake shop opened three years ago, to Italy, which, according to Reuters, has been seduced by their "romanticism," to France and the United Kingdom (last year, the Guardian's Zoe Williams wrote about their "unstoppable rise"). And now, three years after our own backlash, the European anti-cupcake movement has begun.

In a piece in Sunday's Times of London, titled "Enough With the Cupcakes, Already," Laura Atkinson argued that it's time for the desserts to go away. They're not only overpriced and unhealthy, she writes, they've caused London's bakeries to fill with "women in their thirties, cooing over the cutesy, calorie-jammed treats as if they were newborn babies." Atkinson bemoans that cupcakes now represent a "lifestyle choice": "Cupcake-maker is also the latest alternative career aspiration for a host of yummy mummies who have stepped off the corporate treadmill, moved to the country or want flexible working."

For Atkinson, it's not a cake, it's a culture of frivolousness, artificial domesticity and fetishistic cuteness. In the same vein, writing in the Guardian, Williams argued that cupcakes, like New Yorkers, are fundamentally selfish (nobody, after all, needs to share them) and that "part of the drama and magnetism of these cakes is their forbidden nature ... They're really not to eat, but to watch." Those damn Americans, and their tortured relationship with frivolous desserts!

Ironically, our own cupcake trend -- popularized, in large part, by "Sex and the City," and New York's Magnolia Bakery -- peaked about three years ago. They've since been replaced by frozen yogurt and, most recently, macaroons as the dessert item du jour -- and everyone from the New York Times to the Kitchn food blog have written about the trend's demise.

To some extent Williams and Atkinson have a point -- there is clearly something ridiculous about a $6 red velvet cupcake -- but amid their histrionic complaints about cupcakes' impact on gender roles and, in the case of Williams, thinly veiled anti-Americanism, they also miss out on the most important driving factor of the cupcake trend in America: nostalgia. Most of us remember our moms making cupcakes for birthday parties, or school bake sales, and it remains, in many parts of the country, a symbol of modest homey Americana.

When cupcakes went gourmet in the early 2000s, bakers were largely capitalizing on Americans' childhood memories. In the European context, the cupcake was imported only after it rode the nostalgia wave to trendiness. This makes these complaints -- and some recent European cupcake offerings -- seem more than a little bit absurd. Take, for example, the new line of New York-themed cupcakes at German McDonald's. They come in four different flavors -- East Village, SoHo, Central Park and Chelsea -- each represented by a different character. (The East Village is a hipster in an ugly sun hat, SoHo is what appears to be Midwestern college student.)

Luckily, the folks at Eater used Google Translate to decipher each cupcake's description -- and, oddly enough, the SoHo cupcake manages to encapsulate my feelings about this whole thing pretty perfectly: "After a spree breath through your town a bit and draw the view once again small. At Vanilla cup-cake, perhaps. But only briefly, because he is sooo yummy." Well said, SoHo. Well said.