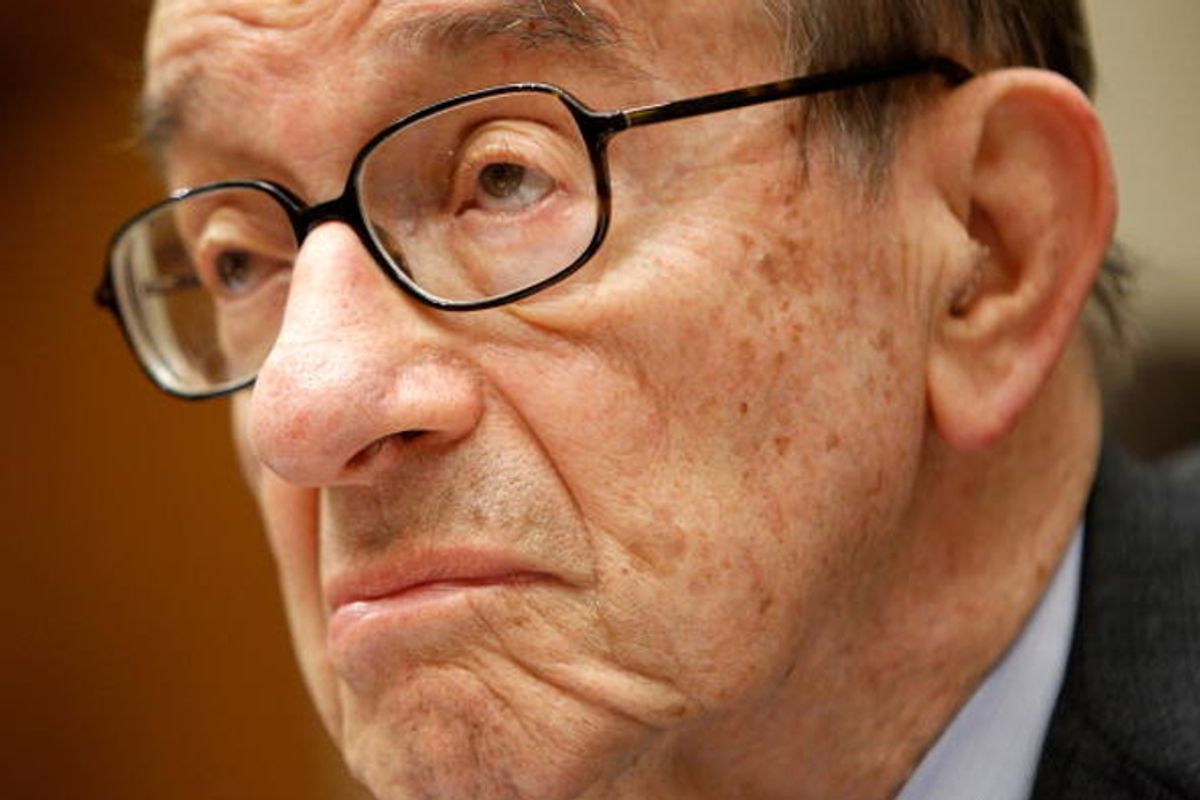 Former Federal Reserve Board Chairman Alan Greenspan testifies during a hearing before the Financial Crisis Inquiry Commission on Wednesday.
--

Former Federal Reserve Chairman Alan Greenspan is defending his record before a panel investigating the roots of the financial crisis, saying his policy at the Fed of keeping interest rates low did not encourage risky lending.

In opening testimony before the Financial Crisis Inquiry Commission, Greenspan responded to critics who say the Fed failed to regulate risky lending to borrowers who could not afford the debt. Those loans became the toxic assets that sparked the crisis and ongoing bank reform effort.

He said the Fed did not have the authority to regulate the nonbank lenders that issued most subprime mortgages.

Panel chairman and former California state treasurer Phil Angelides said the Fed had issued guidance on predatory lending, but had not regulated it. He referred to internal Fed documents in which staff recommended "broad prohibitions on deceptive lending."

"Why in the face of all that did you not act to contain abusive, deceptive subprime lending?" Angelides asked Greenspan.

Greenspan pointed to a series of actions he said the Fed took, but Angelides countered that the Fed's actions covered only 1 percent of the subprime lending market.

"You could've, you should've and you didn't" regulate the lending activities, he said.

In prepared opening remarks, Greenspan blamed a litany of other parties and historical events for the meltdown but accepted no responsibility for himself or the Fed.

He said excess saving in developing nations left too much money in the system, and credit rating agencies undercounted the risk of mortgage investments.

Those companies play a critical role in the mortgage market by buying up mortgage loans and packaging them into bonds that are resold to global investors.

The 10 bipartisan commissioners later will grill former and current executives of Citigroup Inc. about that bank's role in financing and reselling mortgage investments.

The three days of hearings will feature testimony focused on high-risk mortgage lending and the way trillions of dollars in risky mortgage debt was spread through the financial system. The hearings are designed to provide a firsthand accounting of decisions that inflated a mortgage bubble and triggered the financial crisis.

The panel is using Citigroup as a case study because the bank was heavily involved in every stage of that process. The megabank was a major subprime lender through its subsidiary CitiFinancial. Other divisions of Citigroup pooled those loans and loans purchased from other mortgage companies and sold the income streams to investors.

As borrowers defaulted, Citigroup took losses on mortgage-related investments it held on and off its books. Mortgage troubles at Citi, defunct investment bank Bear Stearns and elsewhere exposed cracks in the financial system. In late 2007 and throughout 2008, those fissures grew into a full-fledged credit crisis that crippled the global economy.

The FCIC aims to dissect the bank's structure and show how its functions interacted. Wednesday's witness list includes current and former executives from CitiMortgage, parent company Citigroup Inc., and the division of Citi Markets & Banking that created the most notorious mortgage-backed investments.

The panel also will hear Wednesday from a former risk officer with failed subprime lender New Century Financial Corp., a current and a former Comptroller of the Currency and former executives and regulators from government-backed mortgage giant Fannie Mae.

Fannie Mae's close ties to some leading Democrats and its so-far $75.2 billion bailout have made it a political lightning rod.

Congress created the FCIC last year to examine the causes of that crisis. It is structured like the 9/11 panel that examined intelligence failures preceding the terrorist attacks of Sept. 11, 2001.

Like that panel, the commission has authority to issue subpoenas to compel witnesses to testify or force companies to turn over documents. The commission is charged with examining 22 topics -- from executive compensation to tax policy -- in a report it must issue Dec. 15.