John McCain's no maverick -- but he is a sore loser 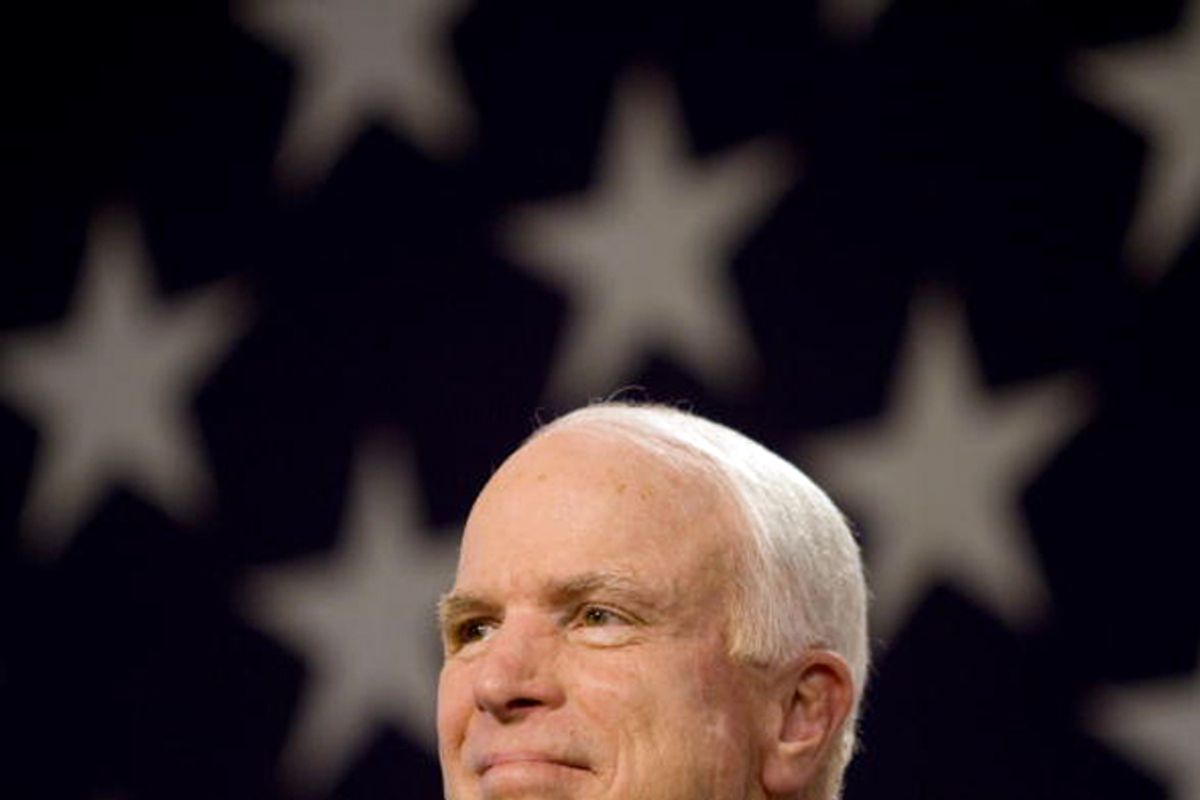 It’s an old story by now -- John McCain saying or doing something that thoroughly undercuts the image that first made him a national political star 10 years ago. His bizarre effort this week to deny that he's ever been a maverick is only the latest example.

Believe it or not, though, McCain does -- sort of -- have a point: For all of his boasts over the last decade, he hasn't been a classic maverick nearly as much as he's been an opportunist -- and a bit of a sore loser.

Just consider the origins of the maverick reputation. In the fall of 1999, the Republican presidential race had boiled down to George W. Bush and Everyone Else. The non-Bush candidates were desperate to distinguish themselves. So, with Bush raising record money and piling on endorsements, McCain played up his own sponsorship of campaign finance reform, hit the road in the "Straight Talk Express," and charmed the press in nothing's-off-the-record bull sessions. He had nothing to lose.

And in good-government New Hampshire, the act caught on. McCain crushed Bush in the state's lead-off primary, a result that instantly transformed the Arizonan into a serious contender for the nomination. The press disdained Bush and his machine. So did moderate Republicans, most independents, and just about every Democrat. So McCain embraced the role they all wanted him to play, that of the anti-Bush. Did he really believe that Jerry Falwell and Pat Robertson were "agents of intolerance"? Who knows? But he'd stumbled onto political gold -- with every segment of the electorate except the GOP base -- and he was ready to exploit it for all it was worth.

It didn't quite work out, of course. Bush slowed McCain's momentum with an ugly South Carolina win, then finished him off on Super Tuesday. Which is when we first met the sore loser version of McCain. Except that most people didn't think of him as a sore loser back then. The underhanded tactics that Bush had employed to beat McCain -- not to mention the stark contract between their images -- made McCain a victim in just about every non-GOP base voter's eyes. When he pouted through the spring and summer and offered only lukewarm support for Bush in the fall, McCain got a pass. After all, wasn't he justified, with all the garbage that Bush's backers had spread about McCain and his 8-year-old daughter in South Carolina?

McCain's embitterment and sense of victimization only grew, and when Bush was inaugurated, it morphed into startling defiance. The new president pushed for sweeping tax cuts, an article of faith in Republican circles. McCain voted no. The new president called for a patients' bill of rights that shielded insurers from lawsuits; McCain demanded that it give patients the right to sue. The new president proclaimed that existing gun laws were more than enough. McCain teamed up with Chuck Schumer to push for background checks at gun shows. And on and on.

Talk swirled of another McCain-Bush race in 2004. McCain's aides did nothing to tamp it down; instead, they reminded reporters that McCain's political hero was Teddy Roosevelt -- who'd bolted the GOP to run a third-party campaign against a sitting Republican president in 1912. Democrats enticed McCain to leave the GOP and join them -- and he encouraged their overtures. In June 2001, McCain invited Tom Daschle, then the Senate's Democratic leader, to spend a weekend with him at his ranch. (Daschle later said that one of McCain's top aides urged him to ask McCain to switch parties.)

Was McCain's defiance of his party's leader part of some long-standing ideological rift? Hardly. McCain's congressional voting record had always been reliably conservative -- until Bush had the audacity to beat him in an election. So McCain used ideological dissent to pursue a personal grudge -- and to position himself for 2004.

Sept. 11 slowed him down. Bush's sudden popularity and the rapid onset of war in Iraq (long a favorite item on McCain's agenda, even after the '00 election) pretty much ended the prospects of a McCain presidential bid in '04. But his pique endured, enough that he publicly flirted with the idea of joining John Kerry's ticket in '04. "Obviously, I would entertain it," he said in May of that year. Ultimately, McCain couldn't bring himself to go through with it -- probably because he knew that, at the age of 68, his chances of ever being president would probably end if he was elected V.P. with Kerry in '04.

But by rejecting Kerry, McCain was free to pursue the GOP nomination in 2008. Not surprisingly, his decision to spurn Kerry coincided with a sharp turn to the right for McCain. If he was going to run in ’08, he was going to do it the traditional way, by courting the GOP base and relying on the party's history of anointing the second-place guy from the last time. So it was that McCain embraced (literally) Bush on the '04 campaign trail and, less than two years later, showed up in Lynchburg, Va., to kiss Falwell's ring. The rest is history.

In the last 17 months, we've seen a similar story play out. When he lost to Barack Obama in November '08, McCain delivered a notably humble concession speech. But the same resentment, bitterness and defiance that was so evident in the early days of the Bush presidency is just as obvious now. With Obama as president, McCain has emphatically reclaimed the hard-right turf that he abandoned when Bush took office, angrily fighting Obama on healthcare, foreign policy, even cap-and-trade (once a McCain pet issue).

The constant in all of this is hardly ideology. When he lost to Bush, McCain veered to the left. When he lost to Obama, he went far to the right. In both cases, though, he made the most of an opportunity to torment the guy who beat him. And that's a trait we usually associate with sore losers.