Is the Kyrgyz turmoil another of the color revolutions?

All uprisings are not born the same way 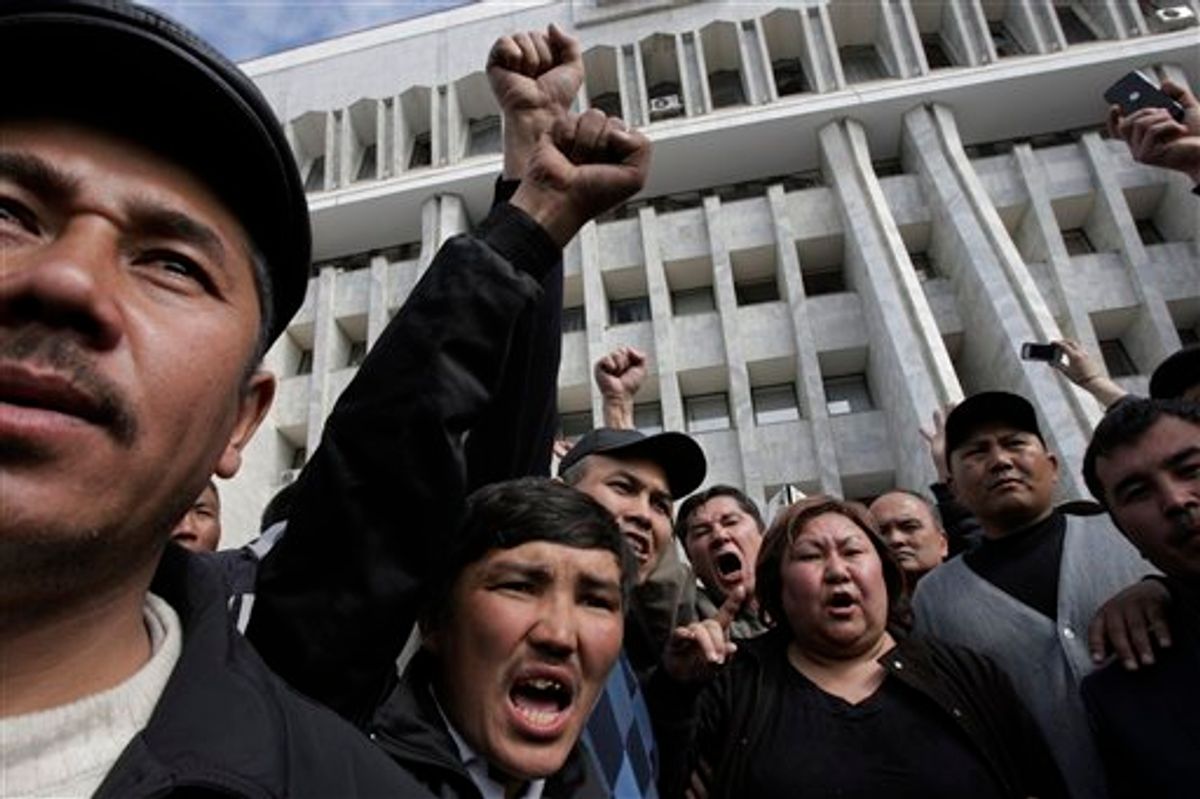 Protesters shout ant government slogans as they gather in front of Kyrgyz government headquarters on the central square in Bishkek, Kyrgyzstan, Thursday, April 8, 2010. An opposition coalition in Kyrgyzstan said it has formed an interim government that will rule the turbulent Central Asian nation for six months. Opposition leader Roza Otunbayeva said Thursday she will head the government that dissolved the parliament and will take up legislative duties. (AP Photo/Alexander Zemlianichenko) (AP)
--

Writing yesterday about Kyrgyzstan, I stated that the events did not represent a Colored Revolution, and indeed might go on to be considered the first "post-colored revolution" revolution in the post-Soviet space. I'm writing now to elaborate a bit on what I meant by this.

By the term "Colored Revolution," I am referring to particular pattern of events (which Professors Valerie Bunce and Sharon Wolchik have perhaps more accurately labeled the electoral model, whereby government change took the follow format: the opposition coalesced in preparation for an election; the election was held and the government implicated in (usually massive) electoral fraud effecting the outcome of the election*; protests were held following the election; and eventually a change of government of some form occurs. I have previously written as to why I think fraudulent elections are a particularly useful vehicle for allowing individual citizens who oppose the government to overcome collective action problems associated with protesting against the government, and there was also clearly a learning effect as these Colored Revolutions spread from country to country.

From this framework, what is notable about yesterday’s events in Kyrgyzstan is that they do not embody the electoral model. Indeed, there was no election, and consequently no fraudulent election to galvanize protesters. Moreover - and I think this will become apparent as an important distinction in the coming days -- this means there is no election to present an aura of democratic legitimacy to the new government (if it holds). What I think is similar, however, is the focus on corruption, which I have argued helped galvanize the Colored Revolutions (and indeed was epitomized by the massive electoral fraud, which can be conceived of as corruption writ large ) and which has been cited as a cause of yesterday’s protests in Kyrgyzstan.

So the big picture question I want to throw out is the following: do yesterday’s events represent the end of the Electoral Model of regime/government change in the post-Soviet world? Has the failure of the electoral model to spread since 2005 led to its demise? Will this reverberate outside of the post-Soviet space? As I noted in my previous post, Iranian Tweeters have clearly taken notice (as one Iranian Tweeter wrote “We must learn #Kyrgyzstan. It took em 1day 2drive away the gov. They occupied gov buildings,Weapons & Fought back #IranElection”.). As the sun comes up on the United States, I'll see if I can get some guest posts from some of the other scholars who have written on the Colored Revolutions, but for now I welcome any and all comments on the topic.

*In Bunce and Wolchik’s version of the electoral model they include cases where opposition involvement in the elections (and especially in monitoring the election) was sufficient to ensure the current government could not actually steal the election. So the steps of fraudulent results and massive protest are missing, but the actual results are the same: a new regime/government brought to power via an election. They thus include Croatia and Slovakia as examples of such cases. It is also worth noting that the Kyrgyz Tulip Revolution did not actually lead to the results of the election that inspired it -- a parliamentary election -- being overturned. Instead, a deal was cut whereby the president was replaced, but the parliament stayed put. For more, see here and here.