Hooking up while the happy couple gets hitched

I was another single girl who hated weddings. Then I found the secret to a blissful ceremony for all 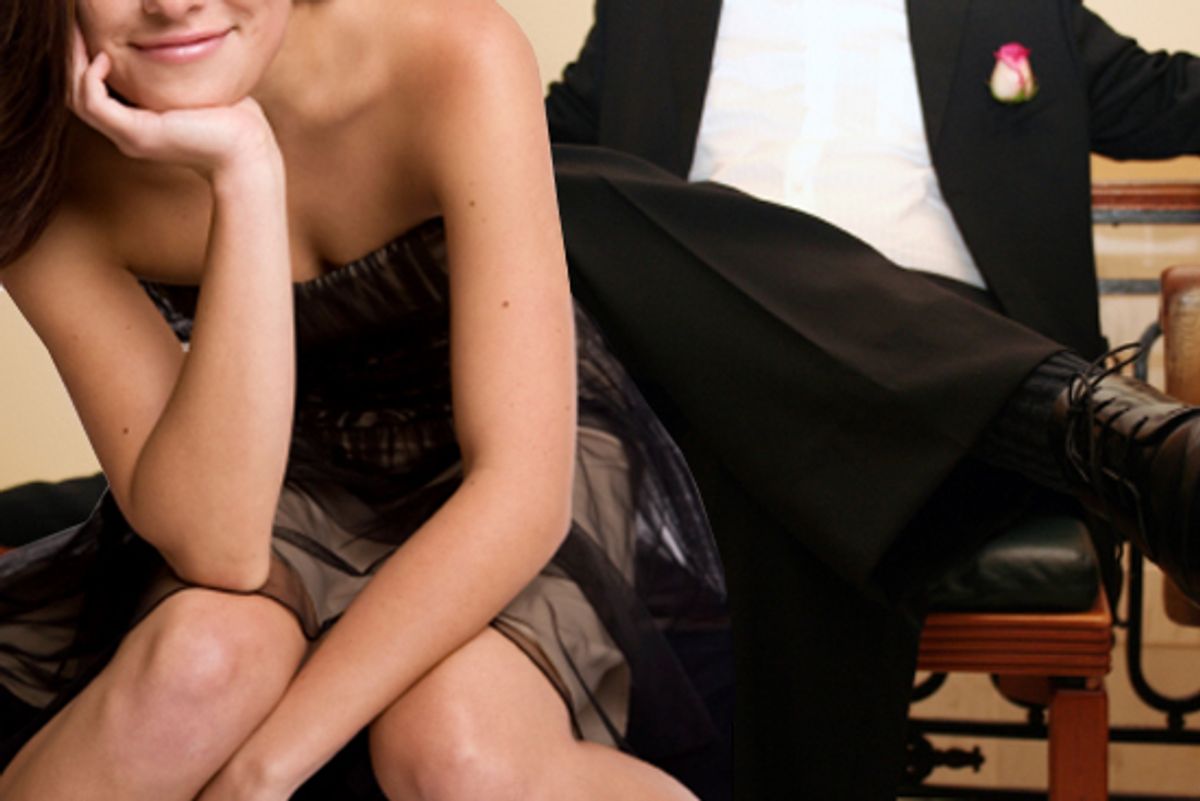 I love weddings. I will go to each and every one I'm invited to, no matter the travel involved, no matter the days off from work, no matter the fact that half of my credit card balance is the result of too many Crate & Barrel multicolored mixing bowl set purchases.

I wasn't always this way.

I went to my first wedding when I was 21. It was my childhood friend Amanda who was getting married and I'd never had a long-term relationship, instead bouncing from one casual hookup to the next. It hadn't bothered me until that day, when I saw how happy and in love she was with her future husband. I remember snarking on her bridesmaid's eggplant color dresses as they walked down the aisle. I then remember drinking seven amaretto sours in quick succession during the cocktail hour, then spending the end of the night, while other couples were slow dancing on the dance floor, crawling underneath each orchid-bedecked table to find my silver stilettos.

It wasn't my finest moment.

I knew I'd become a cliché: the single girl who hated weddings. Most of the time, I reveled in my single-girl status, but something about seeing everyone coupled up, slow dancing to "I Will Always Love You," just made me paranoid that maybe I was missing something. When my brother announced his engagement three years ago, I was thrilled for him, but also thrilled that I was actually dating someone at the time. Until the guy declined to attend as my guest, feeling like it was too much, too soon, an event that ended up foreshadowing our breakup a few weeks later.

When the wedding rolled around, I was single and trying to put on a happy face for my family. But I was still a little bitter when I saw the wedding photographer pointing his camera in my direction during the rehearsal dinner. When he winked at me, I rolled my eyes. He wasn't my type -- he was skinny and tall with his long dark hair and a leather jacket, immediately giving him an artsy bohemian air -- but something about his intense green-eyed gaze made that seem unimportant.

I began vamping for the camera, allowing the strap of my dress to slip halfway down my shoulder. As people cleared out from the dinner, held a few blocks away from the hotel where most guests were staying, I approached him and told him about the after-party one of the other bridesmaids was having in her suite.

"Sure, let me just upload some pictures," he said. I took that as a cue to follow him to his hotel room. He opened two beers, and I sat on the side of his bed, peering over his shoulder at the pictures of the party.

"Nice expression," he cracked when he came to the early pictures of me, sitting sulkily at the table.

"Nice photography," I shot back, leaning closer toward him so he knew I was kidding. I loved seeing the wedding guests through his eyes, loved how he'd captured the moments that had just happened. I loved the way he was gazing intently at the computer, his eyebrows furrowed, a slight hint of a smile on his face.

We never made it to the after-party.

The next day, I had a mischievous grin in all the pictures as I gazed at him through the lens, sharing a secret from the night before. I danced with friends and family and enthusiastically made my best effort to catch the bouquet. I actually had fun.

Ever since then, I look forward to a wedding invite in the mail. I've made out with a handsome groomsman in a field, slow danced with a cute cousin of the bride, and locked lips with a shy out-of-towner in the bar that guests stumbled toward post-reception. I'm all for romance, but watching two people pledge their commitment to each other for life gives me a flutter of anxiety that makes it very clear that I'm not ready to settle down, not yet. And yet, I do want to get married in the future -- and each invitation from one of my peers is a reminder that I'm the age where plenty of people do make that leap. Scoping out my single seatmates during the reception is a distraction against my conflicting emotions; a reminder that while I don't have romantic stability, I do still have the opportunity for adventure. Once a glance turns into getting a drink together that turns into a somewhat groping turn on the dance floor, I've found a wedding dalliance that effortlessly achieves what I so rarely find in my dating life. I know I look pretty. I don't have to worry about who's expected to pay for drinks. Conversation seems to flow as readily as open bar champagne, and I fall in love all over again with my single-girl self. Reentering the reception with my hair slightly disheveled, holding hands and swapping inside jokes with a near stranger, makes me feel delightfully free and sexy and thankful for love in all forms, whether it's for a lifetime, or just a few minutes. After all, it may be a white wedding for the bride, but who says it can't be red hot for me?

Anna Davies has written for the New York Times, Marie Claire, Nerve.com and others. She lives in Brooklyn, N.Y.

Anna Davies has written for The New York Times, Marie Claire, Nerve.com and others. She lives in Brooklyn.