In the challenge that determines who will make it to Fashion Week, contestants design looks inspired by the circus 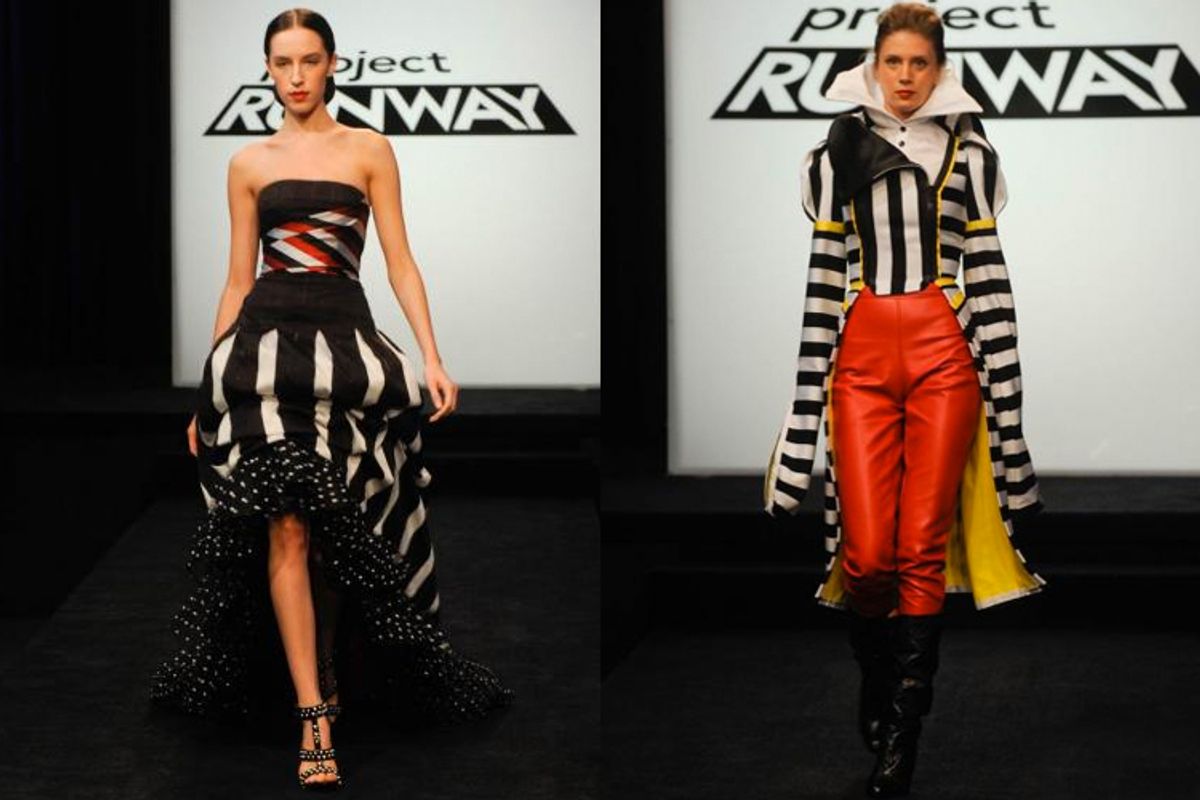 Finally! The moment we've been waiting for all these looooooooong weeks. Which three designers will go to Bryant Park?

The morning starts out with some horrible singing voice waking everyone up. Is this "American Idol" or "Project Runway"? Anthony attempts to tease Emilio, but everyone knows Emilio has no sense of humor, so it doesn't work. Mila is using visualization to calm down.

The designers go one last time to meet Heidi and learn about the challenge. She says that she is sending them to a tent. I attempt to stifle my first thought, which involves making tent jokes about Heidi's maternity wardrobe. Which is just immature. Not to mention hypocritical, since I've had two kids and gained 50 pounds with each in the process. But I digress.

Anthony is a bit concerned about which type of tent it's going to be, because he doesn't think his Gucci driving loafers are going to be able to handle any rugged terrain. Luckily, it's the Ringling Brothers, Barnum and Bailey circus tent.

The designers are standing in the tent in front of the ring, a lot of spotlights start blazing and Tim prances down the blue circus runway grinning from ear to ear. Their challenge this week is to create a high-end look inspired by the circus. For inspiration, the designers receive a private show.

There is a creepy shouting ringleader, clowns putting large rings down their pants, a girl swinging on a rope, a man running on a large metal wheel, and eight shirtless men doing acrobatics. Jay notices these buff acrobats, too. It isn't just me. Tim issues them all a warning about not making it too costumey.

The designers go to Mood fabrics one last time. Emilio, stealing Mila's signature palette, wants to do black and white and mix stripes and polka dots. Mila is inspired by the ringleader. Anthony liked the girl in the blue and sliver outfit who was swinging on the rope. Jay is combining the ringleader with the clowns and Anthony gets a warning from Tim that he'd best step it up a notch.

Back in the workroom, Tim announces that this will be a two-day challenge. There is much rejoicing by all. For some unfathomable reason, Emilio keeps saying, "Come hard or go home."

Mila is just disgusted with Emilio's cocky behavior. He is muttering things about wanting people to pee on themselves because they're so excited by his gown and that he wants it to be the judges' favorite look of the season. Mila is going to give herself cataracts with all the eye-rolling she is doing.

Tim comes in and announces that he is going to "engage everyone." Seth Aaron is making a long coat with boning, a tie and a top hat. Emilo smirks and Tim is skeptical. Emilio is doing a staggering gown of black and white, but Tim asks him rather menacingly, "Where's the color?" Mila smirks and rolls her eyes. Or else they're stuck that way from all the previous eye-rolling.

Anthony is concerned about pumping up the volume. Tim attempts to be supportive by using the words "viscera" and "contrivances" in a sentence. Anthony confesses he needs a dictionary. Mila is doing something black and white with a chevron pattern. (I feel like I type that same sentence about her designs every week.)

Jay is doing some bad-ass (his words, not mine) pants and a military-meets-Michael Jackson-meets-Brit redcoat jacket. Tim and Jay also talk about bitches for a bit, but it doesn't seem to have anything to do with Jay's design. Or Mila.

Anthony changes his design and doesn't seem to have a clear idea about what he wants to do. Jay gets "Lifetime Moment of the Show "#1 by mentioning that his family really believes in him and he's going to push himself for a change. Seth Aaron doesn't like Mila's "shiny-shiny." Emilio adds some color to his dress. Jay is mocked for his Michael Jackson coat.

The designers head back to the Atlas apartments after day one is complete and talk about how nervous they all are. Mila thinks Anthony and Jay should be eliminated, and Jay thinks Mila should be eliminated. He even admits that he dislikes her as a person.

Cynthia Rowley is the guest judge this week. She has been a designer since the 1980s; she has collaborated with Target, done home furnishings and is designing new uniforms for United Airlines. She's not quite the mega-watt fashion personality that one would expect for the penultimate challenge.

Heidi, Cynthia and Nina like Seth Aaron's outfit despite it being a bit costumey. Michael Kors asks about the "crazy crotch" and suggests a man might be able to fill the pants out better.

Anthony babbles nervously about his dress, and Michael calls it a snooze. He then takes a closer looks at the dress and rushes the runway to feel the fabric. He is absolutely appalled that it is polyester crepe de chine. Heidi cannot believe Anthony spent $300 on polyester. The final nail in the coffin is the "she looks like a big blue condom" comment.

Jay's outfit is pronounced "beautifully made" but somewhat boring.

Michael Kors is a Mila fan and thinks her outfit is dramatic and not costume-like at all. He doesn't mention a word about the fuchsia/chartreuse combination. Nina remains unconvinced and isn't crazy about the look. Cynthia declares that she hates the fuchsia. Oh, but look. She's wearing a fuchsia dress. It's all a joke.

And the results are...

Emilio is pronounced sophisticated, and Michael Kors did indeed dub his gown the favorite look of the season. He's in. Setha Aaron is exciting and innovative, and he is also in.

Anthony, while he has talent, doesn't yet have the skills, and he's out. Mila and Jay both had problems this week, but the judges don't send either of them home. It's a tie, and they will both design collections. On the strength of those collections, one will be chosen to go to Bryant Park. Poor, poor Anthony. Tim still thinks that Anthony should be happy. After all, he got to make dresses for Heidi and Jessica Alba.

So will it be Mila or Jay who goes to Bryant Park? Stay tuned for next week, when Tim will visit everyone at home and generally make a nuisance of himself.