My son's kindergarten is a toy gun battlefield

In gun-crazy Texas, I struggle between teaching my son safety and respect and letting a boy be a boy 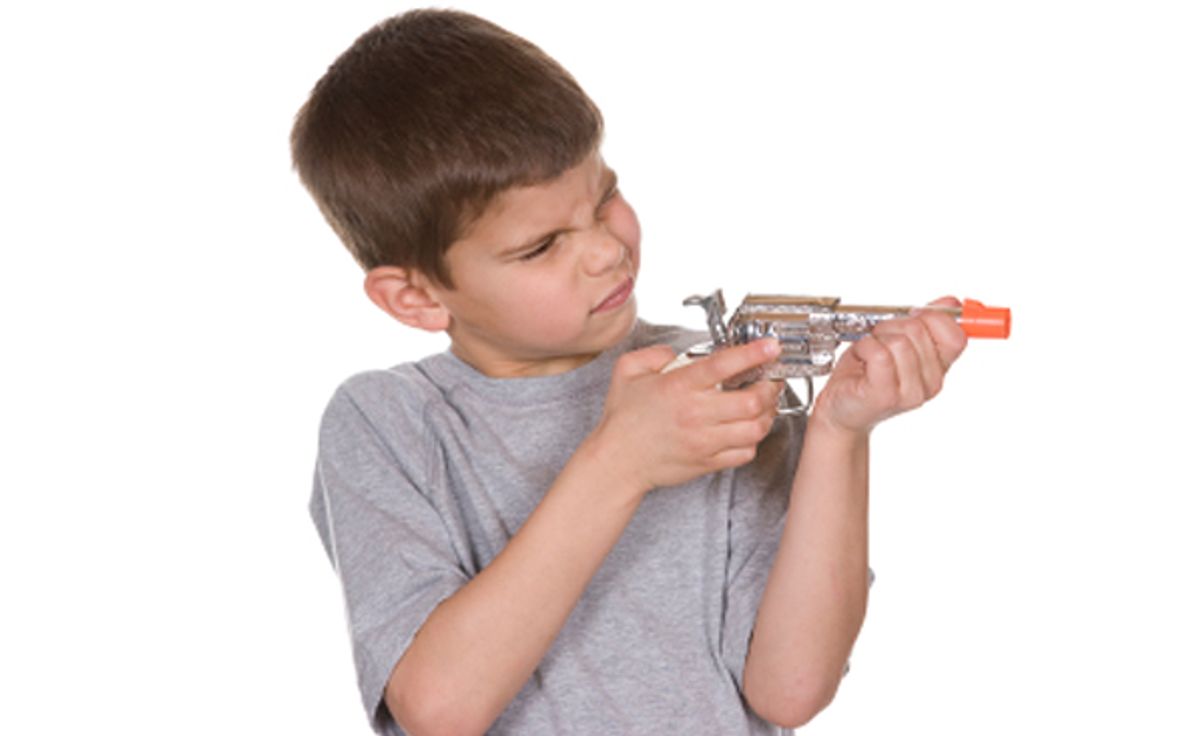 Here in Texas, guns are an integral part of life. Many children have parents who hunt. People living out on ranches need a shotgun leaning in the mud room to take care of that rattler waiting on the front porch. And 200,000 Texans and counting have a concealed carry hand gun permit.

Our son is six; in the past few years I’ve seen him make a play gun out of his finger, a stick, a plastic grabber toy and, once, by chewing a peanut butter sandwich into a gun shape. We've also given him a couple of prop guns for imagination play – a pirate blunderbuss that goes with his pirate costume and a play rifle that stays in the closet unless Daddy can play with him.

We don't let our son point guns – not even toy guns – at people. If he plays with his "rifle" (which looks fairly realistic), it's with Dad, in a way that will teach him good gun safety habits.  We want to shape his respect for guns in advance of the day when he might learn to handle a real gun.

My gun stance is basically this: I am not anti-gun, I am anti-shooting people.

This past weekend, I had occasion to think about our approach to Jacob and toy guns. Could allowing our son to play with toy guns  -- even to the limited extent that we do allow it -- make him less likely to handle guns safely? Or are we just keeping a boy from being fully a boy?

We were at a social gathering with a whole passel of parents and six year olds. The kids were playing happily in the host family’s backyard while the adults discussed school, summer plans, "American Idol" and the Final Four.

I watched idly out the window as Jacob dashed by, a blur of red "Toothless the Dragon" T-shirt and artic-pattern camo pants. He had something in his hands. He was pointing it at his best friend. It was a toy gun – the twin to his own carefully-played-with rifle from home.

I pointed this out to my husband, who went out into the backyard, delivered the "Don’t ever, ever, ever point guns at people" lecture to all of the children, confiscated the misused toy gun and returned to our discussion.

Not 30 seconds later, the child of the house dashed into the dining room. "Mom, it broke again!" he whined. "I told you to be more careful – I don’t know if I can fix it this time," she patiently replied. Turning, she plunked the offending toy onto the table to jam the wayward piece of plastic back into place.

I almost choked. It was a machine gun. A toy machine gun. Not a neon green one or a red one; not a nerf gun or a water gun. A pretty realistic replica machine gun – camo paint coloring, scope and all.

His repaired machine gun in hand, the little boy returned to his game. Looking more closely out the window, I was able to tell that the children were playing war. We did that as kids – chasing each other around, trying to claim the tree house or the jungle gym as "ours." But I quickly noted that the child with the broken machine gun wasn't the only one armed to the teeth with replica plastic weapons. There were pistols, shotguns and another rifle in the armory as well.

At one point, the hosts' child staged a dramatic "death" on the battlefield, lying motionless in the yard with his sweet face pressed to the grass, blond mop-top splayed out in a static halo. His mom noticed and laughed.  "Ever since we watched 'World War II' on the History Channel he’s been playing soldier!"

My husband is a history buff; he watched part of that series. I shied away from the graphic footage of long-ago carnage. I don't think Jacob is capable yet of realizing that the soldiers fighting and dying on the screen represent people with moms and dads, brothers and sisters.  And if he could realize that, those are nightmares I'm not ready for him to have.

We are sheltering and shielding our child, protecting him from playing with toy guns, from falling off his bike without a helmet, from exposure to the horrible, violent things humans do to each other. All week, I've considered the idea that maybe the parents who graciously had us all over to play that day have the more realistic strategy -- let the child watch a show about the reality of what guns do, and let him work it out through his play.

For some reason, it doesn't bother me when the kids play light sabre battle, duel fiercely with foam swords or "zap" each other dead with imaginary lightning bolts from their fingers. But it really disturbed me to see them "shooting" each other with realistic-looking guns in pantomime of war, mankind's greatest horror.

As the afternoon wore on, my husband kept a close eye on the kids; he and a couple of other parents intervened when the guns got pointed at a person.  I was relieved to see that we weren't the only parents in the bunch channeling the adults from "A Christmas Story."

Guns are something that these children, living here in one of the most hunting-friendly areas of a gun-crazy state, will almost certainly encounter in real life. I hope that playing with toy guns won't give them a false sense of security: an idea that once shot, you can just jump back up from the grass and go about your business, despite the reality of so many accidental gun deaths among the very young each year.

But I'm comfortable with our decision about how Jacob should play with toy guns: very seldom and never pointing them at people.