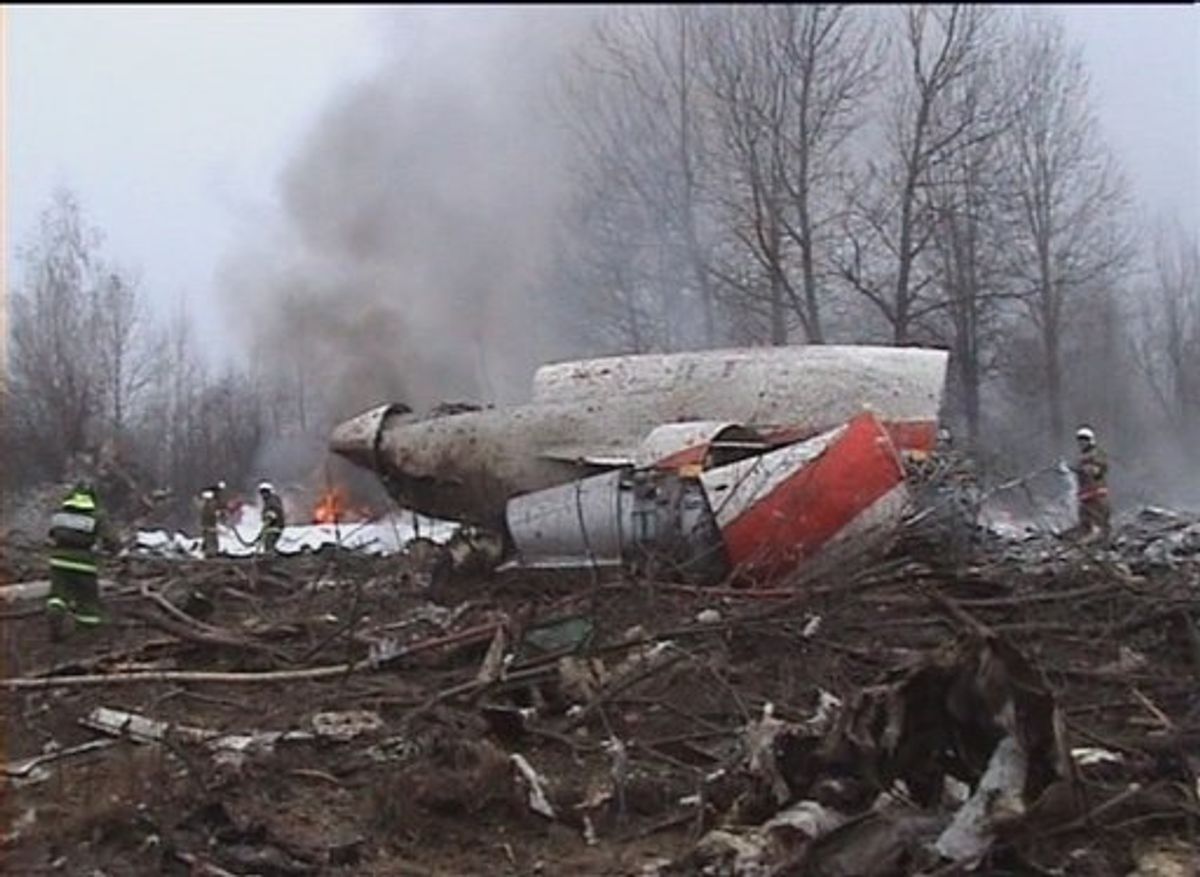 This image from Polish Television's TVP via APTN shows a firefighter walking near some of the wreckage at the crash site where Polish President Lech Kaczynski, his wife and some of the country's most prominent military and civilian leaders died Saturday April 10, 2010 along with dozens of others when the presidential plane crashed as it came in for a landing in thick fog in near Smolensk in western Russia. (AP Photo/TVP via APTN) (AP)
--

Polish President Lech Kaczynski and some of the country's highest military and civilian leaders died on Saturday when the presidential plane crashed as it came in for a landing in thick fog in western Russia, killing 97, officials said.

Russian and Polish officials said there were no survivors on the 26-year-old Tupolev, which was taking the president, his wife and staff to events marking the 70th anniversary of the massacre in Katyn forest of thousands of Polish officers by Soviet secret police.

The crash devastated the upper echelons of Poland's political and military establishments. On board were the army chief of staff, the navy chief commander, and heads of the air and land forces. Also killed were the national bank president, deputy foreign minister, army chaplain, head of the National Security Office, deputy parliament speaker, Olympic Committee head, civil rights commissioner and at least two presidential aides and three lawmakers, the Polish foreign ministry said.

Although initial signs pointed to an accident with no indication of foul play, the death of a Polish president and much of the Polish state and defense establishment in Russia en route to commemorating one of the saddest events in Poland's long, complicated history with Russia, was laden with tragic irony.

Reflecting the grave sensibilities of the crash to relations between the two countries, Russian Prime Minister Vladimir Putin personally assumed charge of the investigation. He landed in Smolensk Saturday with an entourage of Russian officials to meet Polish Prime Minister Donald Tusk, who was flying in from Warsaw. The president's twin brother, former Prime Minister Jaroslaw Kacynski, also flew there in a chartered plane, according to his party.

It is "a cursed place, horrible symbolism," he said. "It's hard to believe. You get chills down your spine."

Andrei Yevseyenkov, spokesman for the Smolensk regional government, said Russian dispatchers asked the crew to divert from the military airport in North Smolensk and land instead in Minsk, the capital of neighboring Belarus, or in Moscow because of the fog.

While traffic controllers generally have the final word in whether it is safe for a plane to land, they can and do leave it to the pilots' discretion.

Air Force Gen. Alexander Alyoshin confirmed that the pilot disregarded instructions to fly to another airfield.

"But they continued landing, and it ended, unfortunately, with a tragedy," the Interfax news agency quoted Alyoshin as saying. He added that the pilot makes the final decision about whether to land.

Russia's Emergency Minister Sergei Shoigu said there were 97 dead. His ministry said 88 of whom were part of the Polish state delegation. Poland's Foreign Ministry spokesman, Piotr Paszkowski, said there were 89 people on the passenger list but one person had not shown up for the roughly 1 1/2-hour flight from Warsaw's main airport.

Some of the people on board were relatives of those slain in the Katyn massacre. Also among the victims was Anna Walentynowicz, whose firing in August 1980 from the Lenin Shipyards in Gdansk sparked a workers' strike that spurred the eventual creation of the Solidarity freedom movement. She went on to be a prominent member.

"This is a great tragedy, a great shock to us all," former president and Solidarity leader Lech Walesa said.

The deaths were not expected to directly affect the functioning of Polish government: Poland's president is commander in chief of its armed forces but the position's domestic duties are chiefly symbolic. Most top government ministers were not aboard the plane.

Shoigu said investigators had recovered the plane's flight data recorders and were examining them.

According to the Aviation Safety Network, there have been 66 crashes involving Tu-154s in the past four decades, including six in the past five years. The Russian carrier Aeroflot recently withdrew its Tu-154 fleet from service, largely because the planes do not meet international noise restrictions and use too much fuel.

The aircraft was the workhorse of East Bloc civil aviation in the 1970s and 1980s, and many of the crashes have been attributed to the chaos that ensued after the breakup of the Soviet Unio

Poland has long discussed replacing the planes that carry the country's leaders but said they lacked the funds.

The presidential plane was fully overhauled in December, the general director of the Aviakor aviation maintenance plant in Samara, Russia told Rossiya-24. The plant repaired the plane's three engines, retrofitted electronic and navigation equipment and updated the interior, Alexei Gusev said. He said there could be no doubts that the plane was flightworthy.

The plane tilted to the left before crashing, eyewitness Slawomir Sliwinski told state news channel Rossiya-24. He said there were two loud explosions when the aircraft hit the ground.

Rossiya-24 showed footage from the crash site, with pieces of the plane scattered widely amid leafless trees and small fires burning in woods shrouded with fog. A tail fin with the red and white national colors of Poland stuck up from the debris.

Polish-Russian relations had been improving of late after being poisoned for decades over the Katyn massacre of some 22,000 Polish officers.

Russia never has formally apologized for the murders but Putin's decision to attend a memorial ceremony earlier this week in the forest near Katyn was seen as a gesture of goodwill toward reconciliation. Kaczynski wasn't invited to that event. Putin, as prime minister, had invited his Polish counterpart, Tusk.

Putin and Russian President Dmitry Medvedev both called Tusk to express their condolences and they promised to work closely with Poland in investigating the crash. Tusk said they had been the first to offer condolences.

"On this difficult day the people of Russia stand with the Polish people," Medvedev said, according to the Kremlin press service.

Putin told Tusk that he would keep him fully briefed on the investigation, his spokesman said.

Rossiya-24 showed hundreds of people around the Katyn monument, many holding Polish flags, some weeping.

"The contemporary world has not seen such a tragedy," he said.

In Warsaw, Tusk also called an extraordinary meeting of his Cabinet and the national flag was lowered to half-staff at the presidential palace, where several thousand people gathered to lay flowers and light candles. Black ribbons appeared in some windows in the capital.

Kaczynski, 60, was the twin brother of Poland's opposition leader, Jaroslaw Kaczynski. Kaczynski's wife, Maria, was an economist. They had a daughter, Marta, and two granddaughters.

The nationalist conservative had said he would seek a second term in presidential elections this fall. He was expected to face an uphill struggle against Parliament speaker Bronislaw Komorowski, the candidate of Tusk's governing Civic Platform party.

The constitution says the parliament speaker announce early elections within 14 days of the president's death. The vote must be held within another 60 days.

Poland, a nation of 38 million people, is by far the largest of the 10 formerly communist countries that have joined the European Union in recent years.

Last year, Poland was the only EU nation to avoid recession and posted economic growth of 1.7 percent.

It has become a firm U.S. ally in the region since the fall of communism -- a stance that crosses party lines.

The country sent troops to the U.S.-led war in Iraq and recently boosted its contingent in Afghanistan to some 2,600 soldiers.

U.S. Patriot missiles are expected to be deployed in Poland this year. That was a Polish condition for a 2008 deal -- backed by both Kaczynski and Tusk -- to host long-range missile defense interceptors.

The deal, which was struck by the Bush administration, angered Russia and was later reconfigured under President Barack Obama's administration.

Under the Obama plan, Poland would host a different type of missile defense interceptors as part of a more mobile system and at a later date, probably not until 2018.

Kaczynski is the first serving Polish leader to die since exiled World War II-era leader Gen. Wladyslaw Sikorski in a plane crash off Gibraltar in 1943.

In the village of Gorzno, in northern Poland, the streets were largely empty as people stayed home to watch television.

"It is very symbolic that they were flying to pay homage to so many murdered Poles," said resident Waleria Gess, 73.

"I worry because so many clever and decent people were killed," said high school student Pawel Kwas, 17. "I am afraid we may have problems in the future to find equally talented politicians."