How I lost my middle-class life

Two years ago, my four kids and I lived in a two-story house. Now, we fight for space in a 26-foot trailer 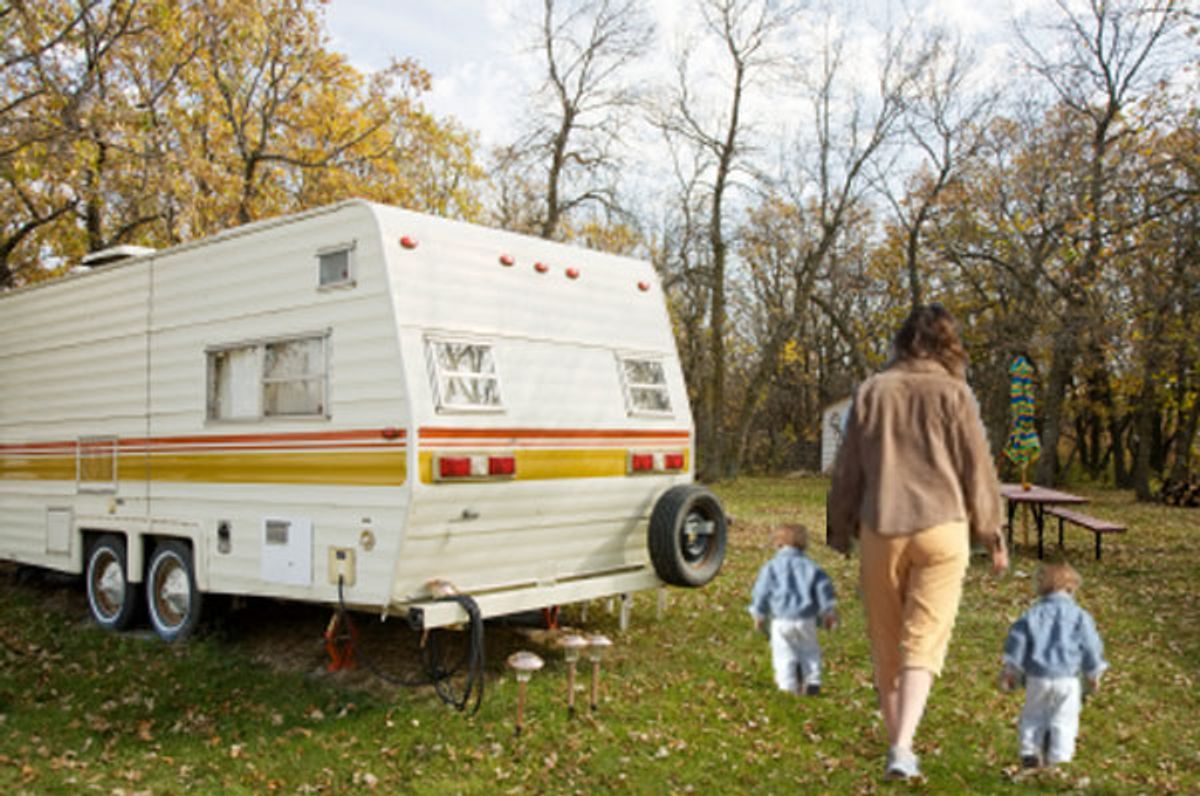 Recently I read an article in the New York Times Magazine by Dominique Browning, the former House and Garden magazine editor who lost her job when the magazine folded in 2007. Like "The Bag Lady Papers," a recent memoir by Madoff victim Alexandra Penney (forced to "scale back dramatically" by, among other things, cutting her maid's hours), it was one of those "how I lost everything and discovered what's really important in life" stories the media is so fond of these days. Browning writes vividly of the dislocation and loss unemployment brings, about her grief at selling her "forever" house. But her despair has a silver lining: She took her retirement income and moved to a second house in a coastal Rhode Island town, where she found peace communing with nature, playing Bach on the piano, and enjoying a slower pace of life. By losing everything, she gained happiness.

This is not one of those stories.

I'm an older single mother with four children under the age of 12, two dogs and a cat, and since September 2009 we have lived in a 26-foot travel trailer in Southern California. Our story is very different from those of Penney and Browning, but we're not all that different from thousands of Americans who don't have wealthy and influential friends, robust retirement accounts or second homes to which we can retreat when the bottom falls out of our lives. Our story doesn't have a silver lining.

Two years ago my children and I were living in a nice five-bedroom house in Colorado, and the decline of the housing market was just an abstract worry. I had plopped down almost all of my life's savings (including cashed-out retirement funds) on the down payment for our house to keep monthly payments low. I was employed in the environmental-permitting field and able to pay the mortgage. My worry was more personal: My young son was not growing. Adopted at age 3 with a successfully repaired heart defect, he had weighed 28 pounds for the nearly two years we had lived in Colorado. After what seemed like endless tests and failed fixes, we learned his lungs had suffered permanent damage in the 18 months before his heart was repaired.

"If he were my son," the doctor said, "I'd move to a lower elevation."

I landed a new job in California quickly -- so quickly, in fact, that we didn't have time to sell the house, an already difficult prospect in a down market. At the last minute, I agreed to rent it to a neighbor's friend who'd hit his own hard times -- his wife had left him. He was a contractor, and since the home needed minor repairs before we listed it, this seemed like a "win-win." Instead, it was a disaster: He never paid a dime, offering six months of excuses that came to an end, eventually, with a court order allowing the sheriff to remove him. But by then, the bank was waiting to take possession; my salary couldn't cover rent in California and our mortgage in Colorado. In March 2009, we lost our house.

The job followed about six months later, a victim of "overhead reduction" layoffs. And with no income, or assets, our landlord asked us to leave our rented house. We sold nearly everything we owned and prepared to move again -- this time into tents.

It's a shock to go from being a responsible member of the middle class to being unemployed and without a home; I knew it would be too much for all of us if we ended up literally on the streets. I was directed toward "transitional housing," but I chafed at the big-brother attitudes and the condescending insistence on mentoring and life-skill classes (and, of course, our two dogs and a cat were not welcome). Apartments were out of our reach financially. So I researched the local parks and, with my last paycheck, made reservations at as many campgrounds as I could. Losing my job and our home had been a double whammy, but the second loss somehow offset the depression of the first: I might not have had an office to go to, or deadlines to meet, but there was lots of work to do. (By the way, in telling my story, I often run into the "father" question: Well, there isn't one. I'm a single mother by choice, having adopted my children over the course of a decade while my career was flourishing.)

That summer, just staying safe and sane was a career in itself. Camping through July and August may sound like some storybook fantasy, a flight from the daily grind, but I assure you the reality was different: It was impossible to get and keep clean -- we acquired a fine coat of grime just walking back to the tents from the public showers, where a quarter bought you three minutes of hot water. We spent hours in the sun and even liberal doses of sunscreen couldn't prevent deep freckled tans. Bug bites accumulated and festered. We had to relocate most weekends, since the campgrounds had been booked months in advance. The discomfort, monotony and lack of modern entertainment quickly diminished the allure of "camping" all summer for the kids. They were apprehensive about the future. I was, too. We ran into a number of other families doing the same thing that summer, but we didn't talk much about it. I think we were all pretty depressed and ashamed to be in that position.

Finally, in September, my severance pay arrived, and we bought a 26-foot travel trailer. Life is so much easier in the trailer -- we have a snug and secure base, cooking and bathroom facilities, even a radio and CD player. We don't have to move every week or 10 days -- we can stay in the R.V. park for up to six months at a time. There's even intermittent access to wireless Internet.

Of course, it's still very cramped living conditions for our crew. The interior dimensions of our trailer -- including the bed, sofa, and dinette and bathroom, not just the floor space -- are approximately 207 square feet. My young son's health may be much better, but he has to sleep on the floor and chafes at being unable to spread out his Legos and hot wheel cars. My youngest daughter sleeps with me in the one bed, as do numerous Barbie dolls and the pets, resulting in restless nights. My middle daughter sleeps on the sofa and has claimed it as her own, tucking books, stuffed animals and homework in the crack between the bed and wall so we no longer bother transforming it back to community seating during the day. My oldest daughter has to convert the table into a bed each evening, and back again each morning. There's very little storage space, so we've all pared down wardrobes and personal possessions. And there's no privacy whatsoever.

I can't exactly send a kid to his or her room; nor can I retreat to my room when I need a break from family life. I once locked myself in my car for a job interview and still couldn't drown out the noise of children arguing. Besides, that's where my oldest daughter often retreats to practice her lines for the school play. On weekends, when we're forced to spend extended periods of time together in the trailer, we snap at each other like rats in an overcrowded cage. I dread summer vacation.

For now, we live on my unemployment check. We haven't applied for other benefits, reluctant as I am to complete the transition from middle class to certifiably impoverished. We appear, I'm told, to have adapted well to our circumstances. Superficially, all appears to be fine. The children are fed, dressed and attend school regularly. The older two are even excelling at their schoolwork. They participate in drama, choir and sports.

But the stress of uncertainty seeps inside me like acid rain. I am plagued by pain, headaches, toothaches, a nagging stiff neck and radiating pain in my shoulder. I don't sleep well. I grow heavy and sluggish and irritable. New lines appear on my face and my graying hair betrays my middle age. I am losing essential parts of myself. Ambition, intellect, patience, dreams.

Yes, our life is much simpler and more frugal now that we've lost everything. But I haven't adopted this life to be happy; I've adopted it out of necessity. I focus on the basics -- food, laundry, the job search, getting the kids to and from school and extracurricular activities, and managing our meager finances. I have another job interview coming up, and maybe this will lead to something. But inner peace escapes me. It hasn't a chance against all the anxieties about our future, about the long-term effects this will have on my children.

What keeps me going? It's not faith. It's not hope. I don't have either. I think it's just motherhood. That unsinkable tenacity that makes women do whatever they have to do for their children.