Meg Whitman once served on the vampire squid's board of directors. Should that disqualify her for public office? 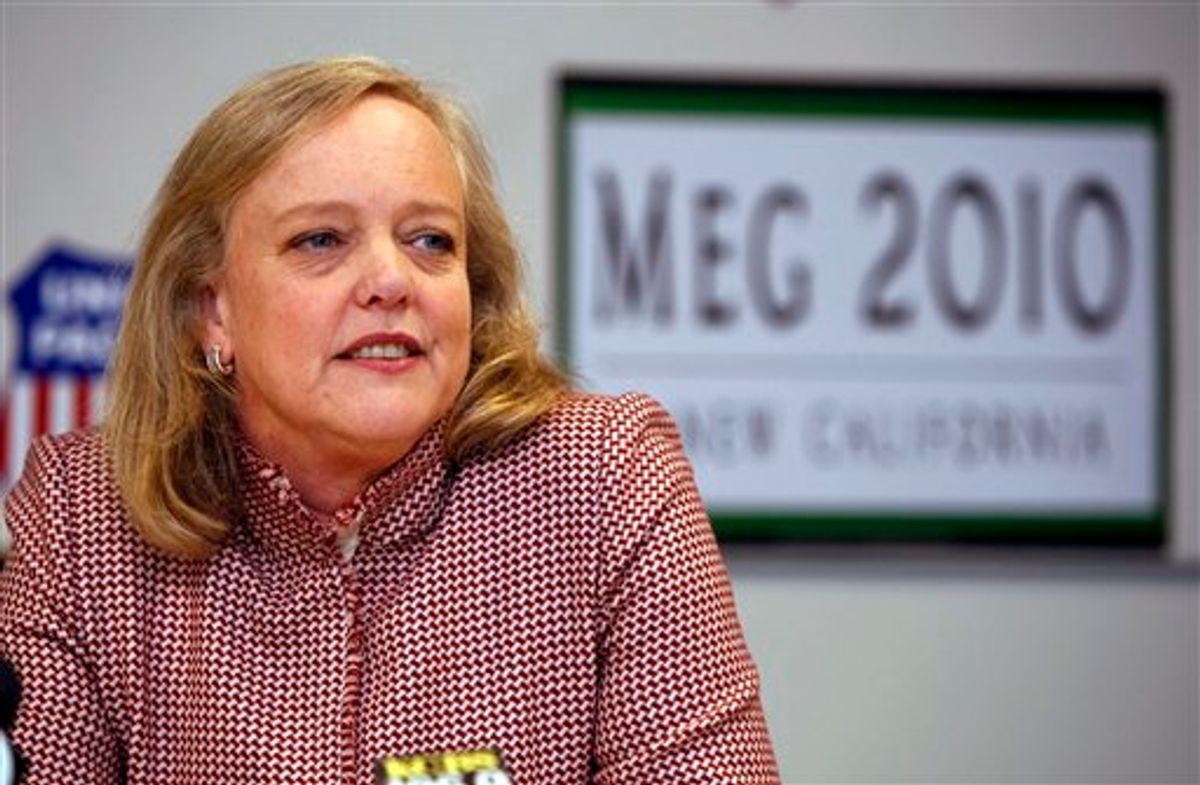 Will California voters care that Meg Whitman, the former eBay CEO and Republican candidate for governor, boasts numerous ties to Goldman Sachs, the investment bank that everyone loves to hate? Lance Williams and Carla Marinucci trace the web of connections in a detailed new piece for the independent non-profit investigative reporting outfit California Watch.

Whitman's relationship with the giant Wall Street firm -- as investor, corporate director and recipient of both insider stock deals and campaign donations -- could pose conflicts of interest if the Republican front-runner is elected governor of California, critics say.

Goldman underwrites millions of dollars worth of California state bonds, is expected to be involved with the financing of a big water bond, and wants to get involved in California's nascent cap-and-trade market. However, if California voters do decide that they'd rather steer clear of the vampire squid's tentacles, they will find (cue fiendish cackle) that it's just not so simple. Democratic candidate (and former governor) Jerry Brown's sister, Kathleen Brown, is a Goldman executive in Los Angeles, report Williams and Marinucci. Steve Poizner, another GOP candidate, once borrowed $500,000 from Goldman when he ran for the state assembly a few years ago.

But compared to Whitman, Poizner and Brown's connections are practically incidental. Whitman was on Goldman's board of directors, and received priority access to hot IPOs managed by Goldman -- a practice known as "spinning" that was later banned. And here we come to the point where Whitman most eloquently makes the case for herself as someone who has bought completely into the high-flying Wall Streeter's value structure.

For her part, Whitman insisted she had done nothing illegal or unethical, saying she was the victim of "the climate of finger pointing and scandal," that accompanied the bursting of the dot-com bubble. She made a profit of $1.78 million on the IPOs, she told eBay employees. It was "a very small fraction of my investment portfolio,"she wrote in her book.

When $1.78 million adds up to only a "very small fraction" of your investment portfolio, then you are truly one of the nation's elite fat cats. Considering how much damage such people have already done to the U.S. economy, perhaps its best to keep Whitman as far away as possible from public office?