People have been screaming for the new get-tough rules, but will they work? 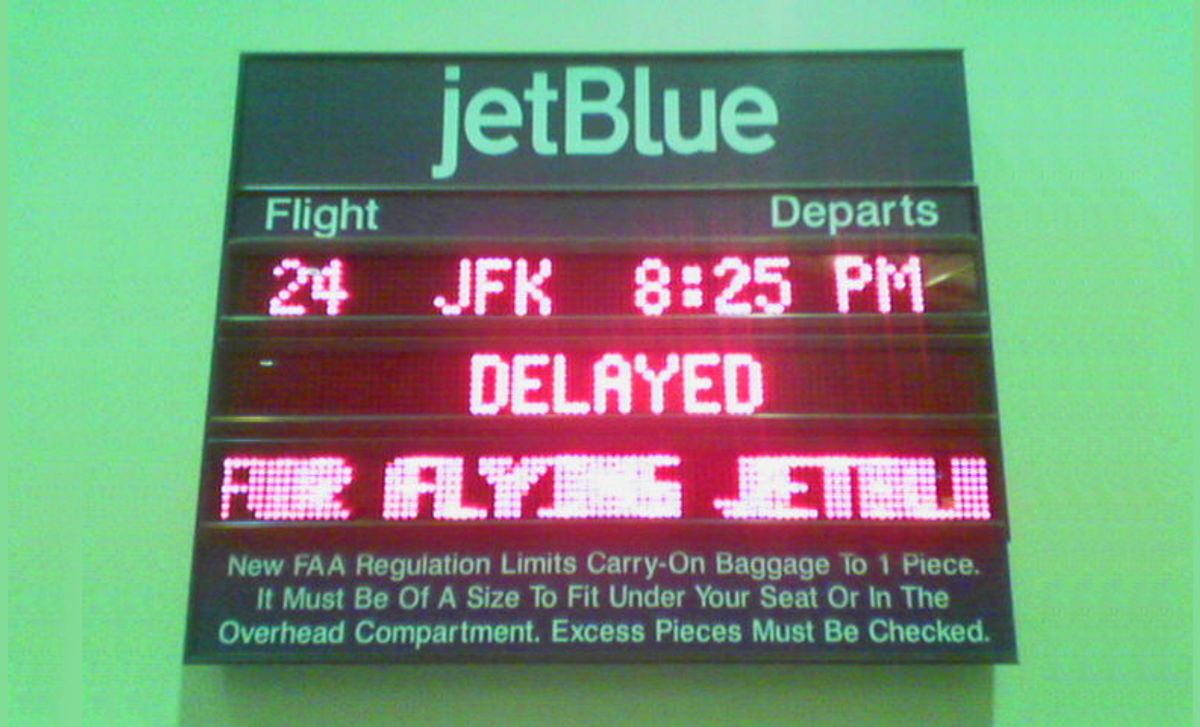 An odd phrase in an Associated Press story about an American Airlines jet that made a precautionary landing in Keflavik, Iceland, on Tuesday afternoon. At least five flight attendants reportedly were sickened by fumes, possibly emanating from one of the plane's cargo holds. Said the AP: "The five crew members were in the cooking area of the Boeing 767-300 when they became ill."

The what? The cooking area? I'm sorry, but I had to laugh out loud at that one. The phrase conjured up this crazy image of flight attendants in white overalls and chef's hats, hovering over boiling pots and hacking at slabs of meat.

Was there something wrong with the term "galley"? Is there anybody out there who wouldn't understand what that meant?

Even funnier, meanwhile, was New York Sen. Charles "Sideshow" Schumer weighing in on Florida-based Spirit Airlines' plan to begin charging up to $45 for carry-on bags, a controversial decision discussed in this column a week ago. Schumer is threatening to introduce federal legislation that will prohibit Spirit and other carriers from introducing the practice.

I think Spirit's idea is a terrible one, and frankly I don't expect mainline carriers to follow suit. Just the same, I am uncomfortable with the idea of legislating customer service and I wish the good senator would stay away from this. His contention that charging for carry-ons is a health and safety issue -- he notes that many people carry medicine and other necessities in their bags -- is at best a stretch, especially since Spirit will not be charging for bags that are able to fit beneath a seat. Whenever politicians begin nosing around in air travel issues, their ideas are almost always misguided.

Schumer obviously has it in for the airlines. (He should be happy he doesn't live in Europe, where the insufferable Ryanair just announced it would begin charging passengers 1 euro to use the lavatory.) Back in 2006 he came up with something called the Air Travel Delay Awareness Act, stipulating that carriers "make available to the public information regarding the delay of a scheduled passenger flight not later than 10 minutes after such information is available." He's also been a vocal booster of the so-called Passenger Bill of Rights.

On that note, no doubt he and many other travelers are happy to learn that a new Department of Transportation rule putting time limits on tarmac delays has finally gone into effect. Airlines unable to meet a three-hour constraint for departure delays, or 90 minutes for arrival delays, now face fines of more than $27,000 per passenger.

The rule sounds good, and is exactly the sort of get-tough measure that people have been screaming for. But is it necessary, and will it work?

First of all, although marathon tarmac delays have a way of becoming huge media stories, as we saw three years ago at JFK,  and again last August in Rochester, Minn.,  they are strikingly rare. Allow me to quote columnist Steve Chapman  writing in the Chicago Tribune last December. "The occasional horror story gets a lot of attention. But the more newsworthy fact is the extreme rarity of this phenomenon," Chapman writes. "DOT says each year about 1,500 flights are stranded on the runway for more than three hours. Sounds like a lot, until you realize that there are some 9.3 million domestic departures annually. The evil targeted by DOT occurs once for every 6,200 flights. That's not a scandal. It's a miracle."

Well said. But as I've written before, be careful what you wish for and don't say I didn't warn you. Here's a scenario that I presented back in 2007 after the JetBlue fiasco at Kennedy. It bears repeating in light of the new rule.

Picture yourself on a delayed airplane going from New York to San Francisco. Parked out on the taxiway in a snowstorm, your assigned ATC wheels-up time is only a half-hour away. But because the three-hour tarmac limit is about to elapse, the plane must return to the gate.

After docking, several passengers, having missed their connections, choose to get off and go home. This means their luggage too needs to come off. And because going back and forth to the terminal burned a substantial amount of fuel, the plane also must be refueled. Removing people and luggage, and revising the fuel load will additionally entail a new weight-and-balance manifest, and possibly a whole new flight plan.

Coordinating all of this will involve a large number of personnel -- most of whom are, at the moment, dealing with other flights -- and require a considerable amount of time. Let’s be conservative and say that despite the falling snow, icy tarmac and logjam of tardy planes, everything takes an hour. You’re now a bare minimum of 30 minutes later than you would have been without returning to the gate.

Throw in the need to de-ice, or the possibility of crew replacement because of duty time regulations, and it’s substantially worse. And, oh, missing that wheels-up time means you'll be assigned a new one, and lo and behold it’s another two hours away. Your three-hour delay just became a five-hour delay.

An unlikely perfect storm? Not really.

Airline delays are complex and fickle, the types of situations that don’t respond well to regulation based on arbitrary time limits. Such rules, somewhat analogous to the mandatory sentencing guidelines so despised by many judges and public defenders, are liable to cause more problems than they solve.

And lastly, can we please maintain some perspective: There’s a context of relativity here that, I feel, many travelers miss: When you step on board an airplane, the expectation is that you are going to be carried thousands of miles away, at hundreds of miles per hour, on a journey that, even when everything goes right, often takes many hours. These are the same trips that once took days, weeks or even months by land or sea. I hate to say it, but therefore the stakes are higher when something goes wrong. It is never acceptable practice for an airline to hold people on a plane against their will. But the vast majority of delays and snafus, in the context of what you are doing and where you are going, are perhaps not as outrageous as they seem.