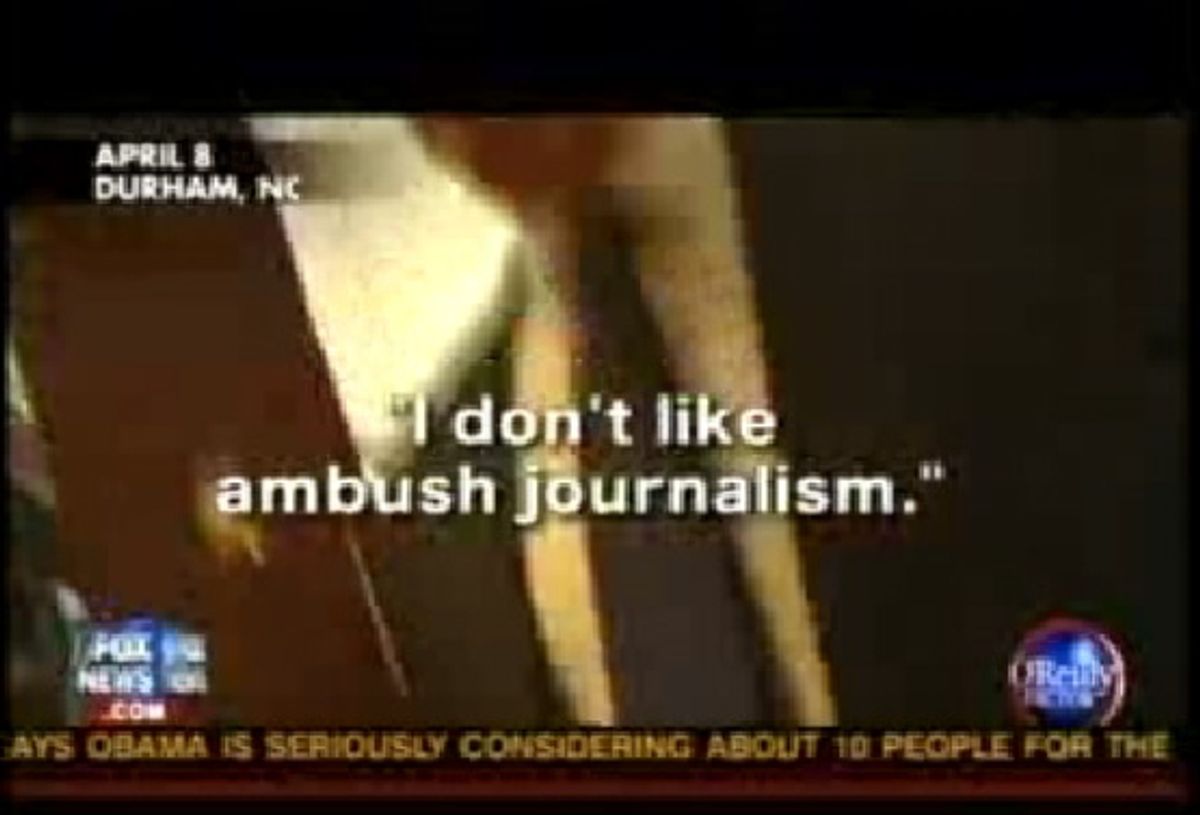 There's been some talk online lately among critics of conservative orthodoxy about a phenomenon on the right they're calling "epistemic closure." Basically, the idea is that modern conservatives have, intellectually speaking, holed themselves up behind a firewall. Blogger Julian Sanchez puts it like this:

Reality is defined by a multimedia array of interconnected and cross promoting conservative blogs, radio programs, magazines, and of course, Fox News. Whatever conflicts with that reality can be dismissed out of hand because it comes from the liberal media, and is therefore ipso facto not to be trusted. (How do you know they’re liberal? Well, they disagree with the conservative media!)

The finer points of how this phenomenon works are up for debate. What's pretty clear, though, is that this basic principle operates even among the self-styled saner voices of mainstream conservatism. I can't believe I'm following that last sentence with this one, but, Fox News' would-be straight man Bill O'Reilly gave us a neat little example yesterday of how epistemic closure works.

O'Reilly, as Salon has pointed out before, is fond of the ambush interview. It's an unfair gimmick to begin with, and the O'Reilly Factor has always relied on that inherent unbalanced quality to produce some incredibly misleading and exploitative footage. Yesterday, the Factor showed footage of its ambush specialist, the impossibly smug producer Jesse Watters, badgering Al Gore before a lecture at Duke University. (Video is at bottom.)

According to O'Reilly, the show has been trying for 11 years to land an interview with Gore. So when Watters catches up with him, he asks, "Why won't you come on the O'Reilly Factor, Mr. Vice President? You know Bill's not a big anti-global warming guy." Gore at first tries to brush off his attacker, saying, "I don't like ambush journalism." But this is Watters' job. Gore is trying to lecture a mugger -- not the best strategy.

Then Gore does a head fake and says, obviously not meaning it, that he'll consider coming on the show. It's an understandable dodge, but a mistake, because Watters interprets that to mean that a formal interview has commenced. "While we have you here, what’s your reaction to the fact that the arctic ice is actually increasing"

Gore tries to back out -- "You don't have me here, I'm not doing an interview" -- but it's too late. As the former vice president escapes to lunch, Watters peppers him with loaded questions. "What's your reaction to the fact that the arctic ice is actually increasing?" "One last question for you: are you embarrassed at all about ClimateGate, sir?" "Do you stand to make any money from cap-and-trade?"

This resembles a genuine interview conducted by a genuine journalist only insofar as someone is being paid by an information medium to direct questions at a political figure. Mainly, it's a master class in smarminess. The whole thing is staged so that Watters is shouting embarrassing-seeming questions at a fleeing Gore, who will obviously not engage with them.

The charges, of course, are spurious. Arctic ice increases every winter, because winters are, naturally, colder than summers. But there's still a trend of long-term decrease. "ClimateGate" is a wholly overblown kerfluffle, and it requires strenuous, willful misinterpretation to think that it disproves climate change. And as for cap-and-trade, the purpose is to use financial incentives to encourage people to get in on the ground floor of clean energy technologies. Gore, presumably solidly on that bandwagon, wouldn't be exploiting some loophole to illicitly line his pockets. It’s the whole point -- the free market approach to preventing environmental disaster.

O’Reilly, ostensibly "not a big anti-global warming guy," smirks at the camera after the segment,  and asks, "Does he have a responsibility to answer those questions?" And then the guy has the nerve to wonder why Gore won’t come on the program.

Actually, he of course isn’t really wondering that. Watters' ambush journalism is structured to make it seem like there’s a conspiracy of liberals who won't engage with the important questions. By being outrageously provocative and misleading, it discourages its targets from engaging with it, and thus is able to make unanswered insinuations about them. It is, in other words, epistemic closure at its finest: questions that don't need answers, and an argument that has no interest in a response.