The cult actor talks about martial arts, exploitation films and the awesomeness of Bruce Lee 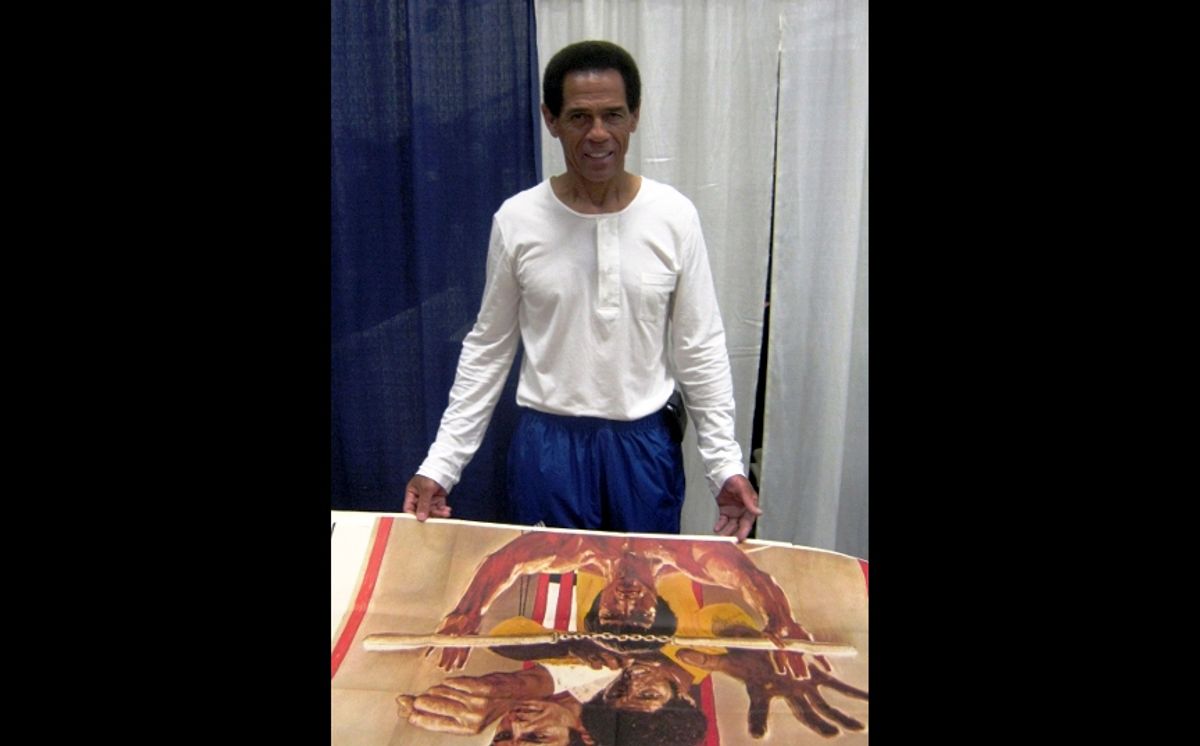 In the section of WonderCon in San Francisco reserved for cult TV and movie actors, Lou Ferrigno flexed his muscles across from Peter Mayhew, the 7-foot-tall Englishman who played Chewbacca in a thick fur suit before Lucas gave us digitized Wookies. Lindsay "The Bionic Woman" Wagner sat one table down from Erin Gray from "Buck Rogers in the 25th Century," and, strangely, Mo Mallady, the voice of the animated pitch lady in a series of Esurance commercials, was on hand to sign 8-by-10's of her pink-haired avatar. But the biggest surprise among the tables in autograph alley at this year's WonderCon was the appearance by Jim "Enter the Dragon" Kelly, the "baddest mother ever to hit the big screen."

As the Afro-topped badass named Williams in "Enter the Dragon" (1973), Kelly has some of the most quotable lines in a movie filled with them. He's "too busy lookin' good," Mr. Han-man comes "right out of a comic book," and "ghettoes are the same all over the world -- they stink." After Kelly was done kicking it (literally) with Bruce Lee in what the Warner Bros. ad campaign trumpeted as "the first martial arts film produced by a major Hollywood studio," Kelly had continued success in lower-budgeted blacksploitation flicks such as "Black Belt Jones" (1974) and "Black Samurai (1977). He also joined Jim Brown and Fred Williamson for the triple-threat slugfest "Three the Hard Way" (1974) and reteamed with Brown and Williamson (with Lee Van Cleef thrown in for good measure) in the spaghetti western "Take a Hard Ride" in 1975.

After some minor roles in a couple of episodes of "Highway to Heaven" in the mid-1980s, Kelly mostly faded away from acting, but he's let his presence be known with recent signings at the San Diego Comic-Con and WonderCon. Though he has yet to cash in on any kind of Quentin Tarantino gravy train, he is far from forgotten. At WonderCon, his signing table sported a steady stream of admirers, many of them too young to have seen "Enter the Dragon" during its initial release. After receiving an autographed photo of Kelly, many addressed him as "sensei" or "sifu" as they thanked him. During a very rare lull in business, I was able to score the following interview with Kelly where we discussed how he landed the role of Williams, the early days of the American martial arts scene, and his reunion with his other "Enter the Dragon" costar, John Saxon, which was appropriately in a dojo.

BC:  How did you come on board "Enter the Dragon"?

JK: It was my second movie, actually. My first movie was "Melinda" (1972). I was at my karate studio and my agent called me. She said, "Jim, I want you to go down to Warner Bros. and interview for this fight film." She called it a fight film. I said, "OK." She said, "You won't get the part, but go out there. I want you to meet the producers. They're going to be doing more fight films. They have a guy they want already, but they're just having a little problem with him so they're interviewing other people." So I went out there and talked to Fred Weintraub and Paul Heller and looked at the script for a second. They asked me what I thought of the script. I said, "I love it. I think it's a great script." They said, "How soon can you leave for Hong Kong?"

BC: Where was your karate studio and how long were you training in the martial arts prior to "Enter the Dragon"?

JK: Yeah, yeah, exactly. I think they were all involved with this guy named Robert Trias. They were all in connection with that, the Okinawan Sorin-Ryu system. Then I went to Chicago; trained in Chicago for a while. I got a green belt in Kentucky and got a brown belt in Chicago and taught in Chicago. Then I came to San Diego and got my black belt under Sgt. LeRoy Edwards, a Marine Corps sergeant.

BC: Did you have any idea in the late 1960s/early '70s that martial arts was going to lead to a film career for you or for anybody?

JK: In 1969, after I got my black belt from Sgt. LeRoy Edwards in San Diego, I had to make a decision about what I wanted to do with my life. I said, "What will make me happy?" I said, "I need to make a lot of money, I need to be very famous, and I need to be motivational for kids." Since I wasn't going to play professional football, and I was a very good football player. I played college football and I could have gone on to play pro. Since I wasn't going to do that, how was I going to get these needs of mine met? I said, "Why don't I become an actor?" What I had to do was become world karate champion and use that as a stepping stone and maybe get into the movies. Maybe by the time I did this, they wouldn't be doing John Wayne fights anymore. Maybe karate would be popular. Bruce Lee had already been Kato in "The Green Hornet" so I thought that maybe one day this stuff would be popular in movies. So if I became world karate champion, maybe I'd get a break to get into the movie business. My super goal was to become an actor. So I left San Diego, moved to Los Angeles, and started my mission toward becoming world karate champ.

BC: What year did you achieve that?

BC: What about working with Bruce Lee? Working with him both as an actor and a martial artist on "Enter the Dragon"?

JK: That would take me a long time to explain all of that to you. I'll tell you quickly: It was one of the best experiences in my life. Bruce was just incredible, absolutely fantastic. I learned so much from working with him. I probably enjoyed working with Bruce more than anyone else I'd ever worked with in movies because we were both martial artists. And he was a great, great martial artist. It was very good.

BC: And John Saxon, everyone thinks he was just an actor but he had some judo training.

JK: Karate with (Hidetaka) Nishiyama. When Nishiyama opened a school down in L.A., John was one of his first students in the shotokan system.

BC: When people watch that movie, they think that you and Saxon are the characters that you are in the movie; that you're as thick as thieves and you're running around gambling and karate fighting together. They believe you're Williams and Roper from that movie.

JK: I saw John in 1991. It was the first time I saw him since "Enter the Dragon." I was working out at the Gracie Jiu-Jitsu Academy. I was taking private lessons down there. I was leaving one of my classes and (early UFC champion) Royce (Gracie) said, "Hey, Jim, guess who's in the other room taking a private lesson?" I said, "Who?" He said, "John Saxon." I went in and said hello to him.

BC: Did you spar with John Saxon?

JK: No, we didn't spar. He was busy training and taking a private lesson. I just wanted to touch base. It was the first time I'd seen him since "Enter the Dragon."

BC: What about "Black Belt Jones" and "Black Samurai" and those starring vehicles, those exploitation-type pictures in the 1970s?

JK: Actually, it was a good experience. I did pretty good financially with them because at the time, my agent was able to negotiate some pretty good deals. I also had great experience working. That's one thing about the films from that time, a lot of the actors, especially minority actors, it gave them a chance to work. They made money and also got the experience working.

There was still so much more to ask Kelly about the filming of "Enter the Dragon" in Hong Kong, working with Brown and Williamson in "Three the Hard Way," as well as his take on mixed martial arts and any future projects. Unfortunately for this interview, the line of fans hungry for his autograph was starting to extend down the aisle. One admirer even brought this huge, two-sheet "Enter the Dragon" poster that was too big to use as a tablecloth. When I checked back with Kelly, there was never another break in the action long enough for me to ask some follow-up questions. Jim Kelly was too busy looking good.