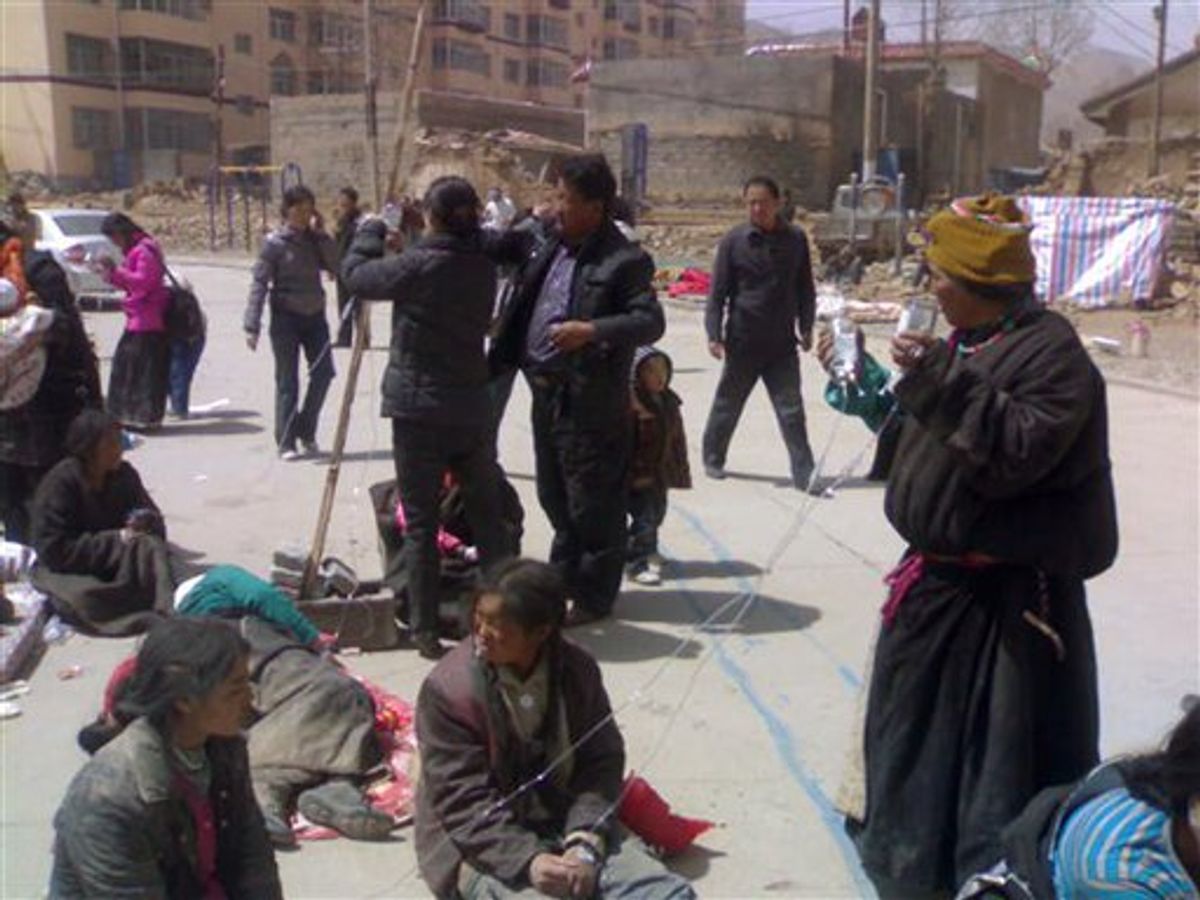 In this photo taken by a mobile phone, local people gather outside after being evacuated from buildings following an earthquake that hit the Tibetan Autonomous Prefecture of Yushu, northwest China's Qinghai province, Wednesday, April 14, 2010. A series of strong earthquakes struck China's western Qinghai province Wednesday, toppling houses, killing scores of people and burying many others in a mountainous rural area, officials and state media said. (AP Photo/Xinhua, Zhang Hongshuan) NO SALES (AP)
--

A series of strong earthquakes struck a mountainous Tibetan area of western China on Wednesday, killing at least 400 people and injuring more than 10,000 as houses made of mud and wood collapsed, officials said. Many more people were trapped and the toll was expected to rise.

The largest quake was recorded by the U.S. Geological Survey as magnitude 6.9. In the aftermath, panicked people, many bleeding from their wounds, flooded the streets of a Qinghai province township where most of the homes had been flattened. Students were reportedly buried inside several damaged schools.

Paramilitary police used shovels to dig through the rubble in the town, footage on state television showed. Officials said excavators were not available and with most of the roads leading to the nearest airport damaged, equipment and rescuers would have a hard time reaching the area. Hospitals were overwhelmed, many lacking even the most basic supplies, and doctors were in short supply.

With many people forced outside, the provincial government said it was rushing 5,000 tents and 100,000 coats and blankets to the mountainous region, at around 13,000 feet (4,000 meters) -high and where night time temperatures plunge below freezing.

Workers were racing to release water from a reservoir in the disaster area where a crack had formed after the quake to prevent a flood, according to the China Earthquake Administration.

The USGS recorded six temblors in less than three hours, all but one registering 5.0 or higher. The China Earthquake Networks Center measured the largest quake's magnitude at 7.1. Qinghai averages more than five earthquakes a year of at least magnitude 5.0, according to the official Xinhua News Agency. They normally do not cause much damage in the sparsely populated province.

Residents fled as the ground shook, toppling houses made of mud and wood, as well as temples, gas stations, electric poles and the top of a Buddhist pagoda in a park, witnesses and state media said. The quake also triggered landslides, Xinhua said.

"Nearly all the houses made of mud and wood collapsed. There was so much dust in the air, we couldn't see anything," said Ren Yu, general manager of Yushu Hotel in Jiegu, the county's main town. "There was a lot of panic. People were crying on the streets. Some of our staff, who were reunited with their parents, were also in tears."

More than 100 guests of the hotel, which was relatively undamaged, were evacuated to open spaces such as public squares, Ren told The Associated Press by phone. After transporting guests to safety, hotel staff then helped in rescue efforts in other buildings, Ren said.

"We pulled out 70 people, but some of them died on the way to the hospital," Ren said, adding other survivors were put in tents in the hotel yard while they awaited assistance.

The death toll rose to about 400 by afternoon, according to China Central Television. Emergency official Pubucairen, who goes by only one name, was quoted as saying that the number of injured has risen to more than 10,000. The official said rescuers were treating the injured at hospitals, race tracks and sports stadiums.

President Hu Jintao sent a vice premier to supervise rescue efforts and more than 5,000 soldiers, medical workers and other rescuers were mobilized, joining 700 soldiers already on the ground, Xinhua said. A message of sympathy also came from the Dalai Lama, the exiled spiritual leader of the often fervently Buddhist Tibetans who is reviled by Chinese leaders.

Yushu and its environs are among the Tibetan areas caught up in the anti-government protests that swept the region in March 2008. Tensions have simmered since, and the region has been closed to foreigners off and on.

CCTV reported that soon after the quake, troops secured banks, oil depots and caches of explosives.

Yushu was for centuries home to important Buddhist monasteries and a trading hub and gateway to central Tibet. In recent years, the government has poured investment into Yushu, opening an airport last year and building a highway to the provincial capital of Xining.

The seismically active region saw a magnitude-7.9 quake two years ago that left almost 90,000 people dead or missing in neighboring Sichuan province 400 miles (650 kilometers) away. Poor design, shoddy construction and the lax enforcement of building codes were found to be rampant.

In Jiegu, about 20 miles (30 kilometers) from the epicenter, the local fire brigade was trying to rescue 20 students stuck inside a school, Kang Zifu, head of the rescue team, told state television. It did not say what type of school it was.

More than 85 percent of houses had collapsed in Jiegu, which Tibetans call Gyegu, while large cracks have appeared on buildings still standing, the official Xinhua News Agency cited Zhuohuaxia, a local publicity official, as saying.

"The streets in Jiegu are thronged with panic and full of injured people, with many of them bleeding from their injuries," said Zhuohuaxia, who goes by one name.

A monk named Luo Song from a monastery in Yushu county said his sister who worked at a local orphanage told him three children were sent to a hospital but the facilities lacked equipment.

"She said the hospitals are facing a lot of difficulty right now because there are no doctors, they have only bandages, they can't give injections, they can't put people on intravenous drips," the monk said by phone while on a visit to the southern Chinese city of Shenzhen. Rural hospitals typically are not well equipped.

"The difficulty we face is that we don't have any excavators. Many of the people have been buried and our soldiers are trying to pull them out with human labor," Shi said. "It is very difficult to save people with our bare hands."