One of Breitbart's hacks accuses Salon of hypocrisy on ambush reporting 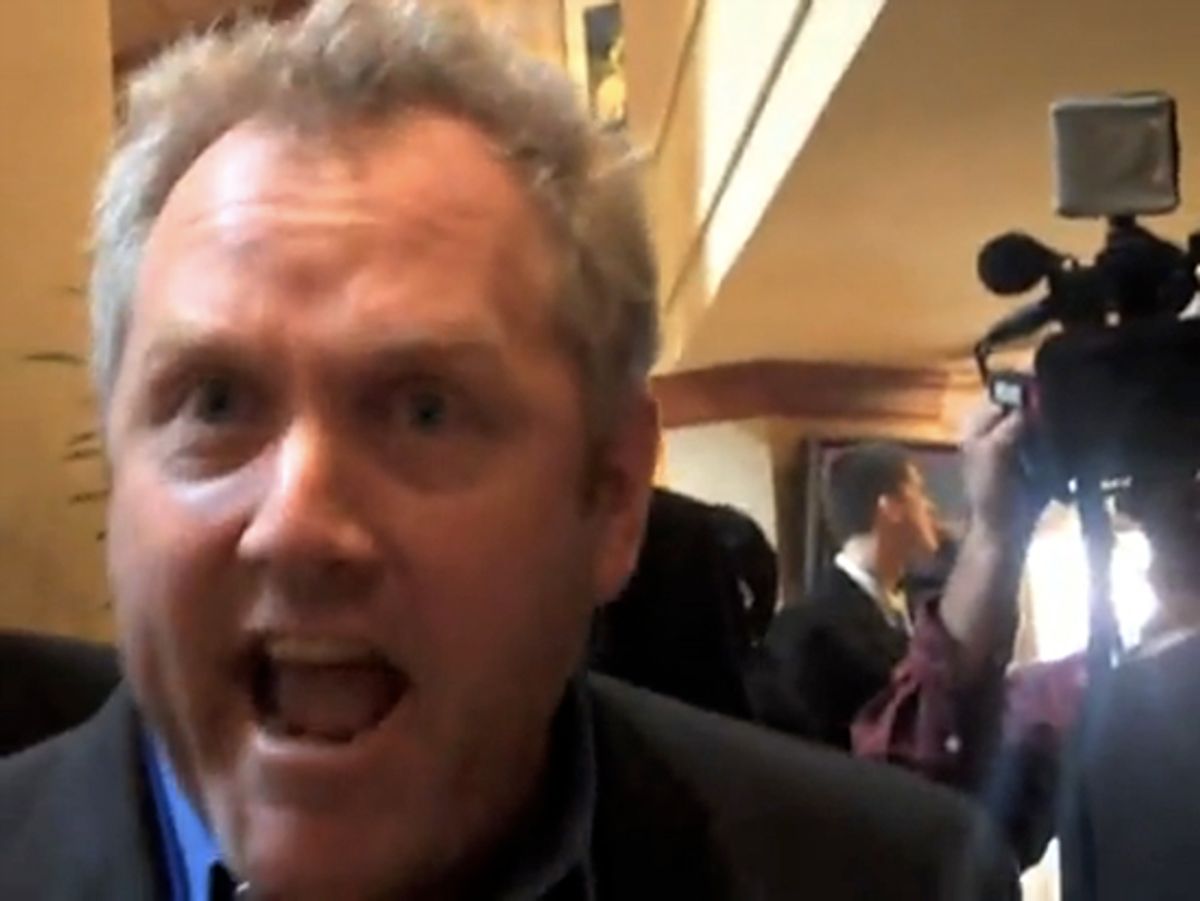 Salon has somehow gotten into a toxic relationship with Andrew Breitbart and his media empire. You know, nobody really intended for it to get this far, but one thing led to another and -- God, those guys are needy. They're just begging for our attention all the time.

Now that the cloud of bilious air gathered around February’s CPAC events in Washington has scattered, you may have forgotten the relevant details. Andrew Breitbart is a budding conservative media mogul, the founder of a constellation of so-called "Big" sites -- "Big Journalism," "Big Hollywood," etc. -- aimed at taking down what he sees as the dominant liberal institutions poisoning America. His signature accomplishment was sponsoring Hannah Giles and James O’Keefe in their ACORN secret-camera stunt. Despite Breitbart's favorite question for our reporter at CPAC, Mike Madden -- "Have you seen the tapes?" -- it turns out that nobody really has, because they were edited down into near-fiction.

Yesterday, Big Journalism announced that they’d caught us in a slip-up. I wrote a post going after Bill O'Reilly and his traveling ambush artist, Jesse Watters, for their unfair prank on Al Gore. Big Journalism's Larry O'Connor thought he’d detected a glaring inconsistency. In a piece called "Salon Decries Ambush Video Journalism -- Except When Their Reporter Does It," O'Connor pointed out that despite my high-minded decrying of the evils of ambush journalism, Salon's hands are hardly clean on the matter:

To think, a punk kid with a camera tracking down and following a public figure to try to get them to say something damaging on video. Oh wait, isn't that exactly what Editor-in-chief Joan Walsh of Salon.com gleefully celebrated in February after her reporter, Mike Madden, used the same tactic on Big Journalism publisher Andrew Breitbart?

Video of Mike talking to Breitbart is at bottom, so you can judge for yourself, but the claim that Mike is an ambush journalist like Jesse Watters apparently rests on the premise that both of them are male human beings who approach strangers in rooms and ask them questions. (Even that's a stretch -- Watters isn't really looking for answers, just video of people retreating.) It's like calling blackface singer Al Jolson the greatest African-American performer of the 20th century -- it demonstrates a complete inability to tell the difference between grotesque pantomime and the real thing.

When he was chasing Gore around Duke University, Watters ignored repeated, near-constant efforts by Gore to say he wasn’t doing an interview. Gore also kept trying to physically get away from Watters, and wouldn't answer any of his ridiculous loaded questions -- all crucial clues to the overeager reporter.

In contrast, Mike approached Breitbart when the guy was obviously holding court, and was being followed around by a camera crew. Breitbart made no effort to get away or turn down an interview. (I’m not even sure his brain would allow him to form the words "I’m not doing an interview right now.") Indeed, Breitbart actually asked most of the questions himself, although they were mainly along the lines of, "How sick are you?" Rather than try to get away, he literally grabbed Mike by the shoulder and escorted him along so that the interview could continue.

Over at Big Journalism, O'Connor wrote, "Of course, if Salon.com hadn’t sent Madden with a flip camera to stalk Breitbart around the lobby then they wouldn’t have all those cool, menacing and distorted screen-caps that they continue to use whenever they write about Breitbart… even today."

I don’t really think we need to feel too bad about that. At the one-minute mark of the video below, Mike's camera wanders away, and you can see Breitbart reach out, grab it, and point it back at himself. Hilariously, O'Connor wrote, "Would they have reprimanded their own reporter, Mr. Madden, if Breitbart had merely repeated 'I’m not doing an interview' over and over again like Gore did?"

Yes, actually, saying, "I’m not doing an interview" is the traditional means by which a person declines to do an interview.

To try to play the victim and accuse Mike of ambush journalism is such an egregious error in judgment by O'Connor that you almost want to write it off as a one-off mistake. Every opinion writer sometimes goes overreaches and makes some indefensible or silly claim. And then you remember: he works for a website that explicitly rejects the norms of journalism. In one of Big Journalism's founding posts, entitled, "Welcome to the Fight: We Are All Spartacus Now," editor in chief Michael Walsh promised not "to conform to some arbitrary code of ethics."

Here's a tip for Michael Walsh: you shouldn’t compare yourself to a heroic rebellious slave in the same post in which you use the phrase "a novelist and screenwriter like myself." (Really, there's only one scenario in which you should compare yourself to Spartacus.) I know this won't get through, but you aren't a victim being unfairly demonized and oppressed. The reason Big Journalism isn't worth taking seriously has nothing to do with the pretensions of snobs at big city cocktail parties. It's because people can tell the difference between journalism and stunts -- exactly what O'Connor has failed to do here. The O'Keefe and Giles ACORN "sting" -- that was a stunt. What Watters did to Gore was a stunt. Asking questions of a figure in public who is obviously interested in talking -- that's reporting. Especially if it turns out that he's concealing something, as it did with Breitbart.

Of course, dirty pseudo-journalistic tricks are the bread and butter of Breitbart and his minions. So it's no surprise that they’d be the ones to mistake real reporting for an ambush, and an ambush for real reporting.