What Apple needs to learn about selling books

Without decent metadata, iBooks is even more annoying than the App Store 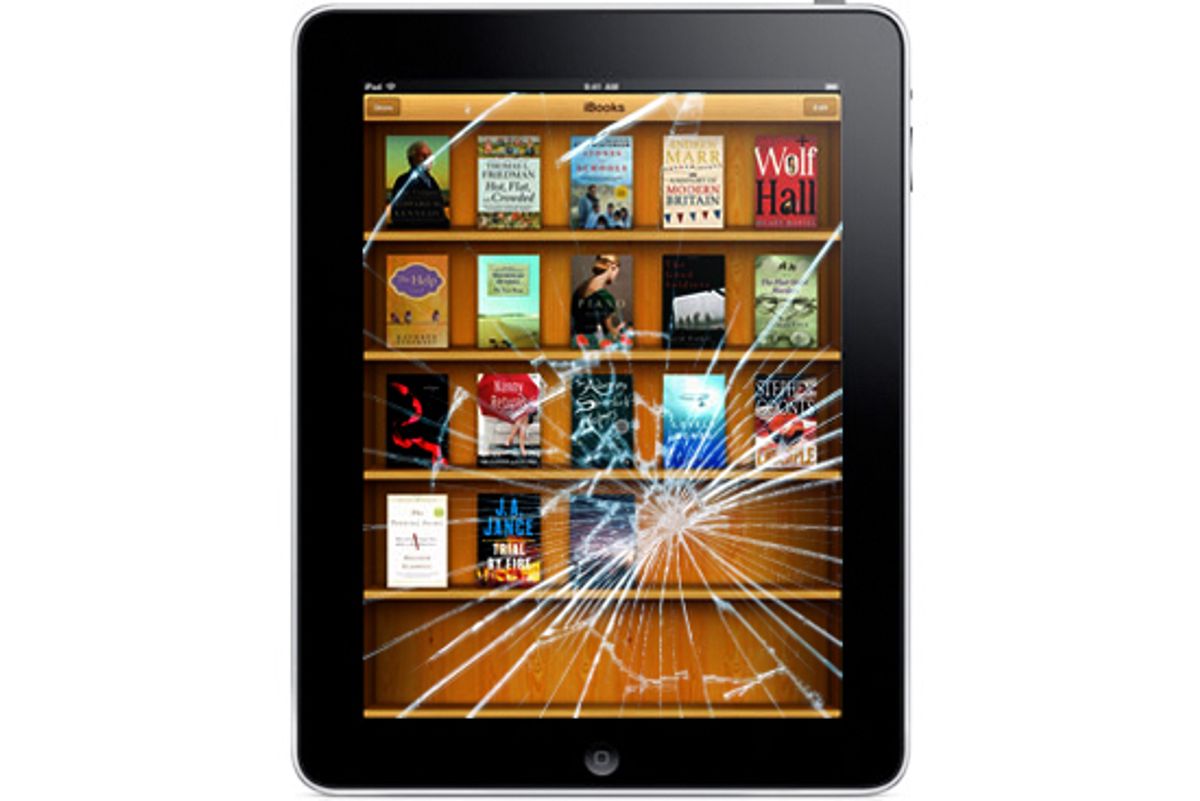 Here's a grim revelation: Shopping for books in Apple's new iBooks store is even more frustrating than shopping for apps in the iTunes App Store.

Anyone who owns an iPhone can testify that despite the abundance of apps made available for the device (reportedly more than 150,000), it's often difficult to find what you want unless you already know what it is. If you're interested in browsing through apps designed, say, to help you manage your freelance business, you have one broad category to investigate in iTunes -- Productivity -- with thousands of apps doing all kinds of stuff, most of it entirely unrelated to your needs.

The Productivity category is broken down exactly two ways: "Top Paid" apps and "Top Free" apps. The raw list of the thousands of apps under the Productivity rubric can be sorted by popularity, release date and name, but there are no subcategories. Browsing through that humongous list is a nightmare: You have to click through to each app's individual page just to find out what it does. If you know you want an expense tracker or an hours log, you can search on those words, but this rarely seems to turn up all the options, let alone point you to the best one. (There might, for instance, be a multipurpose app that can perform the desired service and more.) In the App Store, you always seem to have either too few options to choose from or too many.

Now imagine this annoying experience translated to books, a medium that, for sheer volume and diversity, utterly dwarfs the universe of apps. Almost half a million new titles are published every year, most of them appealing to microscopically distinct interests. The prospect of shopping for books using iBooks, which essentially applies the maddeningly blunt tools of iTunes to a collection of some 30,000 idiosyncratic titles (even more will be added later), is like being asked to dismantle a wristwatch with a butter knife.

I love reading on my iPad, but that doesn't blind me to the abject inadequacy of the iBooks store. By contrast, Amazon, which has 15 years of online bookselling experience under its belt, has largely figured out the key to helping people find the books they want. It's a little thing called metadata.

Chances are that most of the people reading this will either 1) know all about metadata and how important it is, or 2) have no idea what I'm talking about even though they are probably taking advantage of some form of metadata every day. Metadata is, simply, information about data, stored with the data. In the case of a book (the data), a particular title's metadata would include the full title, author's name, publisher, date of publication and ISBN number, as well as more subjective information, such as which genres it belongs to (fiction/nonfiction, biography, history, religion, etc.) and additional subgenres (science fiction, military history, travel memoirs, etc.). It can also include such information as prizes the work has won, the nationality of the author and specific details about the subject matter ("Vikings," "suicide," "Christmas" and so on).

The classification of books is a complex and subtle discipline that is already several thousands of years old -- older, in fact, than bound books themselves. Familiar modern methods like the Dewey Decimal and Library of Congress systems are only the most recent examples; they were designed for libraries. The needs of ordinary book readers and buyers are somewhat different.

Let's say I recently read and enjoyed Val McDermid's "A Place of Execution," and I want to find more crime fiction like it. On iBooks, I can discover McDermid's other novels easily enough, but that's pretty much it. The only other metadata about "A Place of Execution" that the Apple store gives me to work with is that this title belongs to the "Mysteries & Thrillers" category. So does Lisa Lutz's "The Spellmans Strike Back," a comic mystery that's part of a series about the misadventures of a family of wacky detectives in San Francisco. Sure, they're both crime fiction, but Lutz's book couldn't be more different in flavor from McDermid's gloomy, flinty procedurals set in Northern England and Scotland.

Eventually, iBooks might collect some reader reviews for McDermid's book; the store is too new to have many reviews at the moment, but the software does provide for it. I might learn from those reviews that McDermid writes in a mystery subgenre sometimes called "tartan noir." If I'm lucky, the review mentioning this fact might also list some of the other authors who work in the same vein. Then I could search iBooks for their names, seeking more bleak detective fiction to feed my newly acquired appetite. But that's a long chain of maybes.

Amazon, of course, already has lots of reader reviews, albeit of often dubious merit. But it can also show me what other books were bought by customers who bought "A Place of Execution," and what other books have been reviewed by the reviewers of those books. Even more helpful is customer-generated metadata like tags (keywords) and lists, all created and built upon by other readers who share my enthusiasm for this type of book.

One of the tags Amazon customers have assigned to "A Place of Execution" is, yes, "tartan noir," and if I click on that tag, I'm taken to a page listing 117 other titles by authors like Denise Mina and Ian Rankin -- all great recommendations. An Amazon-hosted discussion board linked from the book's Amazon page will tip me off to the fact that tartan noir fans also seem to like Swedish detective novels, another subgenre for me to investigate. Amazon does provide an official classification for "A Place of Execution" -- "Mystery & Thrillers/Police Procedurals" -- but metadata generated by other readers who are truly interested in the book is far more useful in helping me find more books to buy and read, which is the purpose of a bookstore, after all.

If iBooks follows the App Store's example, it will eventually be willing to tell me any other books the purchasers of "A Place of Execution" bought, but apart from inviting reviews, that seems to be the limit of the metadata that the app will allow me to gather from my fellow customers. Even more baffling to the would-be browser is the relative shallowness of each category page in iBooks. The one for "Fiction & Literature," for example, currently shows only two subcategories: recent releases and short story collections.

Presumably, the store has other fiction subcategories, but there's no way to get to them, or even to know what they are! If I want to see which less-recent novels the store carries, I have to search for each one by title or author. A casual user could easily come away with the impression that iBooks carries only 300 titles, rather than 30,000, making it appear a lot less like a bookstore and a lot more like the paperback rack in my local supermarket.

I could speculate on the reasons behind Apple's choices, but I won't here; it's simple enough to browse on Amazon for titles to read on the Kindle for iPad app instead. And as music blogger Paul Lamere has pointed out, even Amazon has barely tapped the potential of metadata when it comes to e-books. The Whispersync net that the bookseller uses to help customers keep track of where they are in a book, as well as where they've highlighted, bookmarked and otherwise annotated the text, contains unprecedented information about how people read.

Why not, Lamere suggests, aggregate the data and tell us which books are read all the way to the finish, bought but never read at all or, conversely, reread repeatedly? Which books are most frequently abandoned, and is it always at about the same point -- a particularly description-heavy chapter or patch of tedious exposition? The possibilities are both tempting and alarming (as the blog post's title, "Spying On How We Read," intimates).

However far we want to take it, metadata is essential to helping readers find books when they don't have a real, physical bookstore to wander through. As the author and blogger Mike Cane puts it in a magnificent and damning rant about how iBooks mauls metadata imported from the open-source EPUB format (admittedly, a mess in its own right), "the world runs on metadata."

It doesn't matter that authors can upload their self-published EPUB books into the iBooks store if potential readers can't find those books under their relevant categories and subcategories. Or if those categories are mishandled, as happened in the infamous AmazonFail incident last year, when a nameless data handler erroneously flagged as "adult" over 50,000 titles that had been previously labeled as having gay or lesbian themes. (Books with the "adult" flag are excluded by Amazon from various automatically generated lists of recommendations and bestsellers.)

It's become much easier and cheaper to publish a book in the past decade, but the explosion of titles on the market has its drawbacks. When faced with an overwhelming number of choices, most book buyers tend to become less adventurous, not more so. They have increasingly gravitated toward known quantities like bestsellers and widely celebrated or publicized books. The ideal guide to getting out of that rut is still a thoughtful bookseller, librarian or friend (or even critic!) whose taste you know and trust, but such people aren't always easy to find, and even when found, they're not omniscient. Good metadata, treated with respect and care, may be your only compass in some of the more exotic provinces of the vast world of books. It's the little, geeky detail that makes sure a voice from the margins still has a chance to get heard.