The disappearance of Ronald McDonald

A new move to ban the fast food clown misses out on a crucial fact: His company has already left him behind 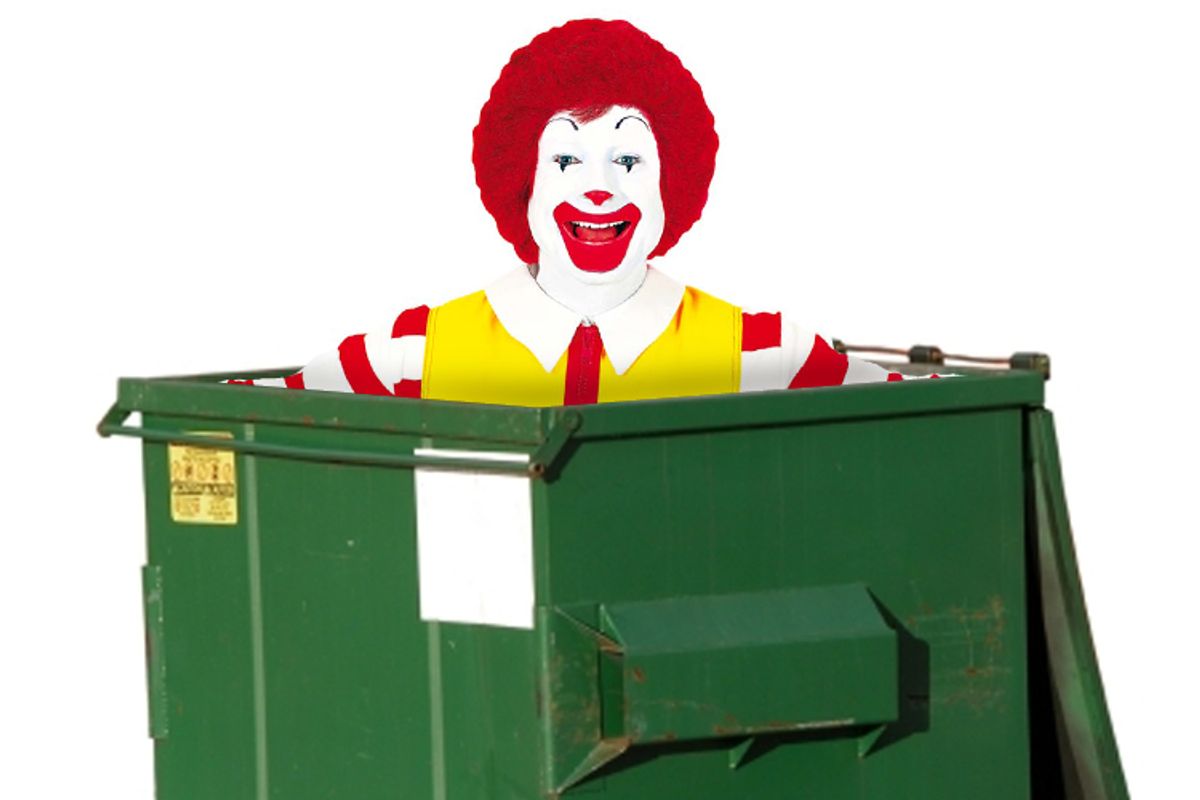 Life isn’t as jolly as it used to be for Ronald McDonald. The fast-food mascot, who has delighted and/or terrified generations of American children with his red and yellow jumpsuit and his relentless perkiness, has been in hot water recently. Two weeks ago, a Boston group called Corporate Accountability International (which previously helped force Joe Camel into retirement) launched a campaign to remove the brightly colored clown from McDonald's restaurants and ad campaigns, claiming that he has too much influence on children's eating habits, and promotes bad nutrition and the "fast food industry childhood obesity crisis."

The story was picked up everywhere from CNN to ABC News. Academic Raj Patel cited a study on his blog claiming that more than half of parents want the clown to retire: "Ronald is more of a Hamburgler, dipping into our pockets with our children’s fingers, and leaving us with bills for long afterward." The group staged "retirement parties" for the mascot in various McDonald's restaurants. Others aren't pleased: Marketing management consultant Gary Stible, whose company, the New England Consulting Group, helped develop Cheetos' Chester mascot, told me over the phone that these attacks are petty and misguided: "This is about people who have too much time on their hands, and ought to be out doing good, like Ronald McDonald is."

Ironically, this hubbub comes at a time when the world's most famous clown has largely disappeared from McDonald's ad campaigns. When, after all, is the last time you've seen Ronald McDonald in a TV ad? As the San Francisco Chronicle noted, his image is even tough to find on the McDonald's Web site. In recent years, he's mostly been relegated to the company's charity operations -- like the Ronald McDonald house -- international ad campaigns, and as a spokesman for healthier eating choices. Instead, McDonald's TV ads have centered around the company's slogans, like "I'm loving it" or the delightfully tragic "I'd hit it," and featured entertainers like the NSYNC and Britney Spears. It goes without saying that, in the age of Ke$ha, there's something decidely uncool about hawking your food with a red-wigged clown.

"It’s very clear that McDonald's has moved away from Ronald in their ads," says Darren Tristano, executive vice president at Technomic, a fast-food consulting firm. "Over the last 10 years it's become less about Ronald McDonald and more about the marketing of movies and toys to kids." The Playland concept -- the playgrounds located in McDonald's outlets that were widespread in the '70s and '80s -- has also been pushed to the wayside. "As younger generations have matured and become more sophisticated," Tristano says, "there's been less of an appeal to the circus theme and more of an appeal to contemporary figures, like athletes and celebrities."

McDonald's isn't alone in downplaying its traditional mascot. KFC has all but phased out Colonel Sanders (Tristano: "After all, he's dead!") and Domino's has long since gotten rid of the Noid (in favor of edgy ad campaigns that include fecal brownies and metaphorical self-immolation). Instead, fast-food chains are using more and more real people -- like Subway's Jared Fogle, who has "positive gender appeal on both sides" -- and recognizable pop cultural figures to advertise their goods. Why? With the Internet shortening people's attention spans, says Tristano, "we’re looking at cycles rather than a long-term appeal." It takes a long time to get kids (and adults) to associate a cartoon figure with a brand, whereas sports and music stars already come with their built-in appeal and can quickly be trotted out for brief campaigns to spotlight particular items.

Today's most successful fast-food mascots -- Burger King's creepy monarch, and Jack in the Box's talking toy CEO -- are hip, edgy and targeted more toward adults than  children. The Burger King, after all, is a 7-foot plastic dude who hangs out in Russian saunas with scantily clad babes and steals recipes from competitors. The Jack in the Box is a hipster CEO whose ads are filled with carefully crafted irony and an overt stoner vibe. "We're looking at rapidly changing consumer taste, and that's paralleling what we appreciate in advertising. "

All of which means that the campaign to remove Ronald McDonald, even if it's successful, isn't going to have much of an impact on our country's obesity rates -- and we would be better off spending time at home with our children, teaching them to cook and choose foods wisely. Plus, if we actually did manage to get rid of that clown, we'd be denying Japanese ad-makers the inspiration for crazy things like this: