Nabokov's "The Love of a Dwarf," Sartre's failed Freud epic and other missed encounters with the movies 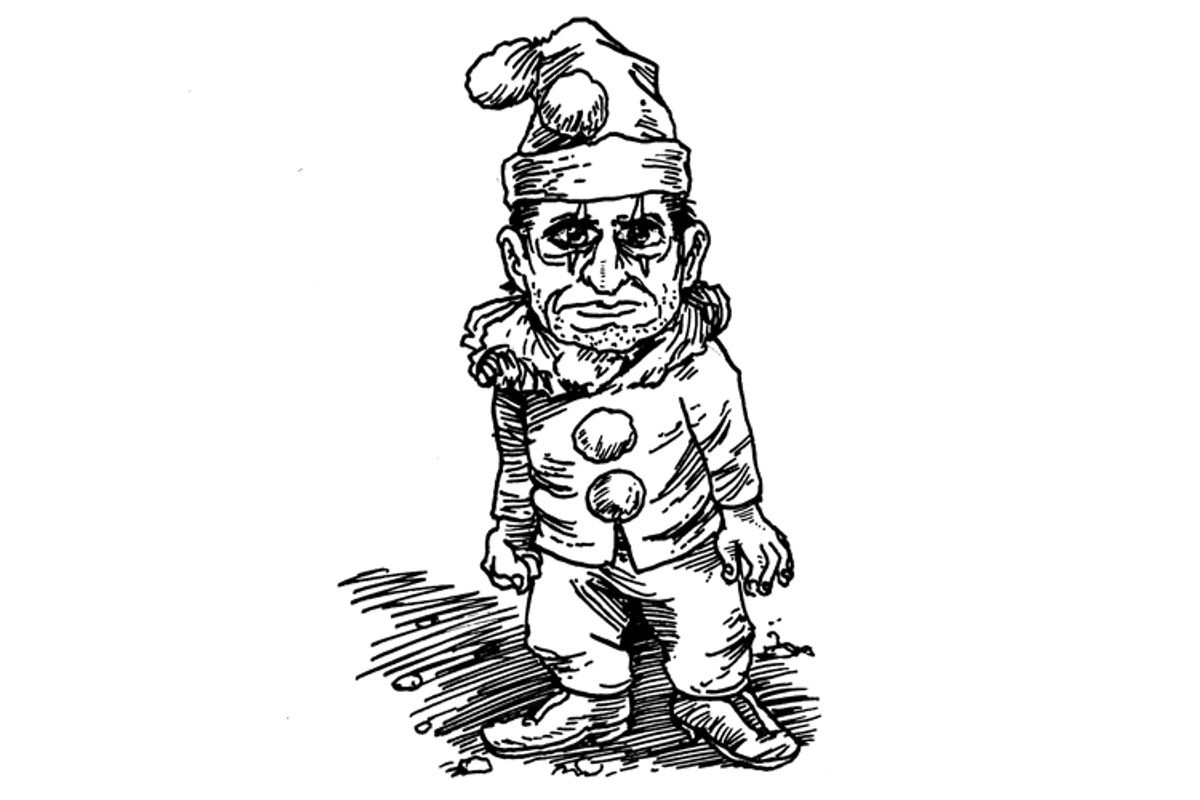 Every March, the Believer magazine publishes its annual Film Issue. This year’s number features -- among other things -- the complete budget, line by line, of a $15,000 feature film; Brian T. Edwards on watching "Shrek" in Tehran; specious life advice from comedian Julie Klausner; and a DVD of rare, beautiful and funny short films from the Yugoslavian Black Wave. In the excerpt below, Elif Batuman (whose wonderful new book, "The Possessed: Adventures With Russian Books and the People Who Read Them," was recently published by FSG) unearths seven never-produced screenplays penned by famous intellectuals.

As a struggling young writer in Berlin, Vladimir Nabokov once wrote a phenomenally depressing screenplay titled "The Love of a Dwarf" (1924). The protagonist, a sexually frustrated London circus dwarf, has a one-night stand with the depressed, childless wife of a circus magician. The dwarf quits the circus and retires to a small northern town, waiting vainly for the magician’s wife to join him. Eight years later, she turns up on his doorstep, announces that he has a son, and rushes away. The dwarf pursues her, but dies of a heart attack at her feet. To the gathering onlookers, the magician’s wife announces that her son died a few days ago. In 1939, Esquire printed a short-story version of "The Love of a Dwarf," titled "The Potato Elf": it was Nabokov’s first American publication.

Kasimir Malevich, the Russian artist best known as the painter of The Black Square and the founder of the Suprematist movement, once wrote a three-page film script titled "An Artistic and Scientific Film -- Painting and Architectural Issues -- Approaching the New Plastic Architectural System" (1927). Crucial moments in the script included a square rolling on its side to form a circle, and a cross pivoting on its axis to become a cube. Malevich, who was greatly partial to cubes, once remarked that "every Leninist workman must have a cube in his house, as a reminder of the eternal, constant doctrine of Leninism." After Lenin’s death in 1924, Malevich unveiled what he described as a "Lenin monument.” It consisted of an enormous cube. When asked, "But where’s Lenin?" Malevich simply pointed at the cube with an offended expression.

In Hollywood in 1929, Winston Churchill met Charlie Chaplin, who had long been plotting to make a film about Napoleon. Churchill proposed to write Chaplin a "Young Napoleon" screenplay, and reportedly sketched with great enthusiasm a scene in which Napoleon flies into a rage while taking a bath, and slips on some soap. Chaplin never made a Napoleon movie.

In 1934, Winston Churchill signed a £10,000 contract with British film mogul Alexander Korda for a screenplay on the reign of King George V. Korda observed that the first draft, composed by Churchill in less than two weeks, was "really splendid," but a bit heavy on politics. Churchill turned in a revised script in 1935. It was never filmed.

In Los Angeles in the 1940s, Frankfurt School philosophers Theodor Adorno and Max Horkheimer spent nearly six years working on a screenplay about prejudice. The final draft, titled "Below the Surface," features a violent commotion on a subway car, during which a woman carrying a vacuum cleaner either falls or is pushed onto the tracks. A one-legged peddler tries to rally the passengers against a Jewish man, who had previously jostled him. At the end of the film, the audience is to be polled regarding the guilt or innocence of the Jew; other audiences might be shown a similar film in which the Jew would be substituted by a "Negro" or a "Gentile white-collar worker." "Below the Surface" was batted around Hollywood for years, subjected to numerous scriptwriting consultations, and pitched to the likes of Jack Warner and Elia Kazan. It was never produced.

In 1944, the French writer and philosopher Georges Bataille, the so-called "metaphysician of evil," decided to write a "commercial" film starring Fernandel, a singer-comedian particularly famous for his horselike teeth. In a departure from earlier roles, Fernandel was to play a bourgeois Marseilles soap manufacturer who, during his children’s holidays, assumes the costume and character of the Marquis de Sade. With the participation of some local prostitutes, he reenacts the practices described in "120 Days of Sodom," Sade’s novel about four scientific-minded libertines who lock themselves for months in a medieval castle, subjecting forty-six innocent young people to escalating sexual torture, culminating with murder. When the soapmaker’s experiments likewise result in the death of a prostitute, he commits suicide, effecting "the triumph of morality." After approaching one producer, who was not encouraging, Bataille abandoned the script, which has been lost to posterity.

In 1945, Walt Disney signed Aldous Huxley to write a screenplay for "Alice and the Mysterious Mr. Carroll": a combination live-action and animated incorporation of "Alice’s Adventures in Wonderland" with the biography of Lewis Carroll (Charles Dodgson). Dodgson, a beleaguered Oxford lecturer known as the Dodo, has already written "Alice in Wonderland" under the name Lewis Carroll. He and Alice take refuge in Wonderland from Alice’s cruel governess and Dodgson’s Tory vice-chancellor. These villains, who disapprove of "nonsense books," must never learn that Dodgson and Carroll are the same person, lest Dodgson be barred from a coveted university librarianship. A series of fantastic adventures culminates with the resolution of the Carroll-Dodgson identity through a deus-ex-machina appearance by Queen Victoria. "It was so literary I could understand only every third word," Disney said of Huxley’s script, which he didn’t end up using for his adaptation of "Alice in Wonderland" (1951).

In 1958, John Huston commissioned Jean-Paul Sartre to write a film treatment of Freud’s discovery of psychoanalysis. In Sartre’s retelling of the years between 1885 and 1896 Freud overcomes the Oedipus complex, achieves the terrible burden of autonomy -- "Luckily, we always die in the end," the father of psychoanalysis remarks, in a Sartrean voice-over -- and, while rushing through Vienna in a dark carriage with his patient Anna O., abandons his theory of infantile seduction. By Sartre’s admission, the script would have had a running time of "seven or eight hours." Huston invited Sartre to his castle in Galway to work on a rewrite. Somehow, this revision came out even longer than the original. "One can make a film lasting four hours if it’s about Ben Hur," Sartre complained, "but the Texas public will not put up with four hours of complexes!" Huston ended up hiring a new screenwriter.

The March/April Film Issue of the Believer is available now.

Elif Batuman’s first book, The Possessed: Adventures with Russian Books and the People Who Read Them, was recently published by Farrar, Straus and Giroux. She lives in San Francisco.