Can we stop pretending the anti-Obama movement is a populist, anti-elite uprising? 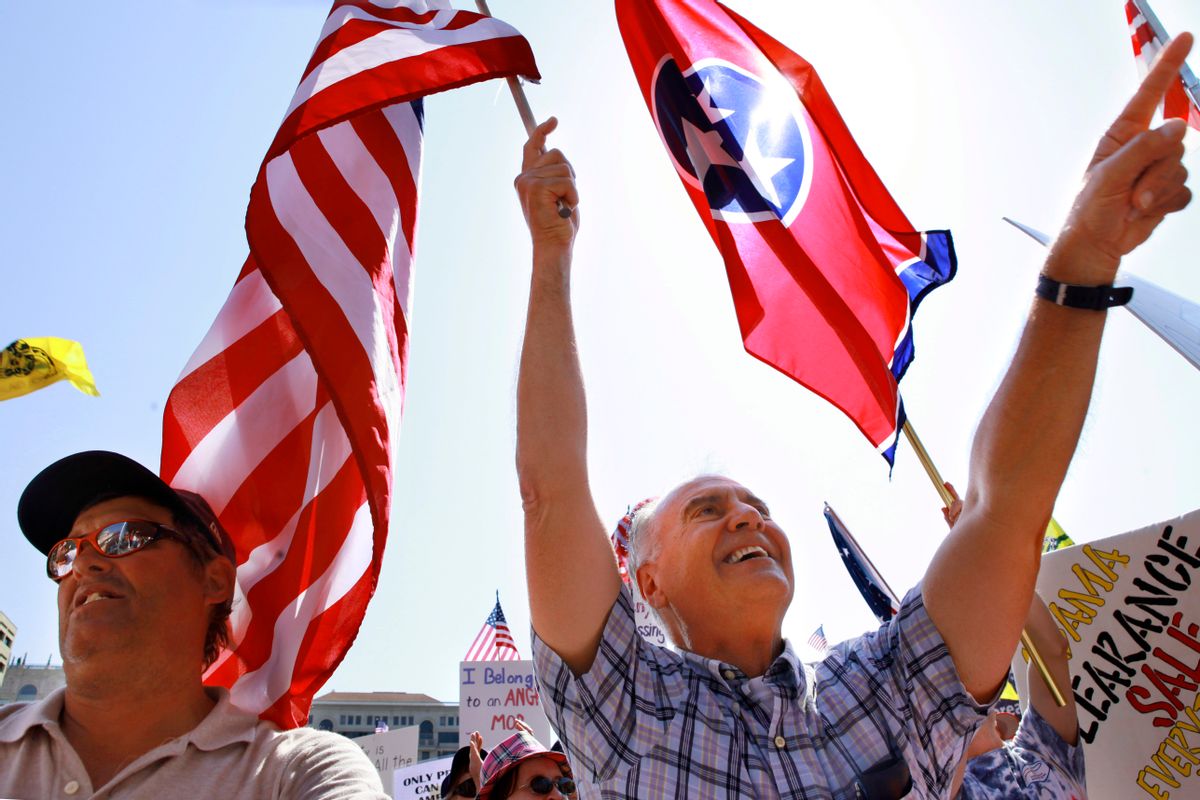 Salon's Numerologist, David Jarman, nails it today: He combines the widely covered CBS/New York Times poll on the Tea Partiers -- no surprise, they're white, and they think President Obama is doing too much for black people; some surprise, they're wealthier than the average voter -- with a less-covered University of Washington poll that finds they also doubt the hard work, intelligence and trustworthiness of black people.

The Times poll was enlightening: Yes, they're white, older, male and Republican; 56 percent make over $50,000 a year and 12 percent make over $250,000. They're more likely to rely on Social Security and Medicare than the average voter -- and, no surprise, they tend to approve of those two programs. The Times goes on:

They are more likely than the general public, and Republicans, to say that too much has been made of the problems facing black people.

As my friend Digby points out, make that "way more likely: 52% of them think that as compared to only 28% of the general public." (Digby delves into much more detail about the poll, here.)

But Jarman also digs into a University of Washington poll released last week that looked at the views of Tea Party supporters in seven battleground states. Not only do they think too much is made of the problems facing black people, they have bigoted views about black people generally. Jarman explains:

And Tea Party supporters don't like it when anyone notices the racists in their midst?

I've written before that I find it galling when the wealthy, white Pat Buchanan (who by the way spent much of his adult life on government health insurance) lectures me about being "condescending" to the Tea Partiers, as though they're a grass-roots uprising of the vulnerable against the elites. That's garbage: They are a well-funded uprising of the elites against the vulnerable. And they'd be nowhere if their mission wasn't largely supported by the top of corporate America (and the GOP shadow government in waiting).

The idea that the Obama administration's policies somehow favor black people will come as a surprise to many in the black community who are concerned that the president hasn't done enough to directly address the crisis of unemployment, especially among black men. I happen to believe Obama's race-neutral employment policies, targeted to place, not race, are the way to tackle the problem. But I have an idea for Tavis Smiley, Cornel West and Michael Eric Dyson: They should hook up with the Tea Partiers. That's an audience that really needs to hear their complaints about how little Obama is doing for black people.