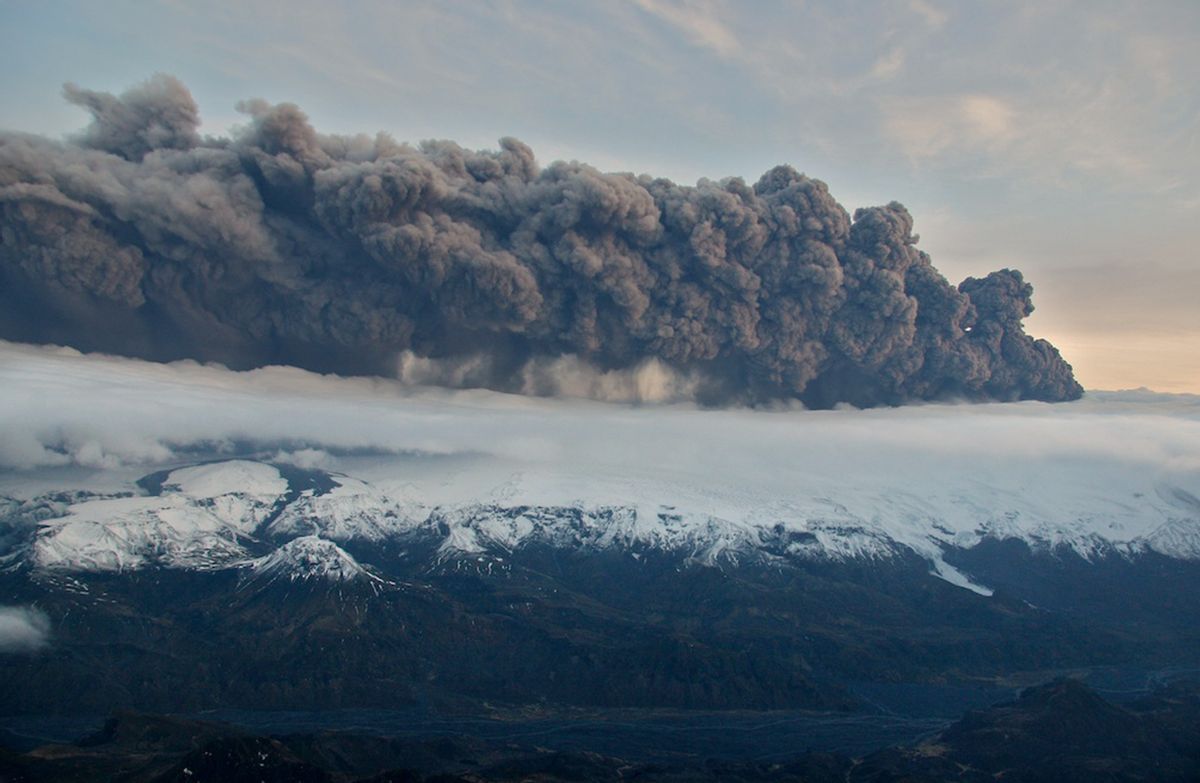 Smoke and steam hangs over the volcano under the Eyjafjallajokull glacier in Iceland, Wednesday April 14, 2010, which has erupted for the second time in less than a month, melting ice, shooting smoke and steam into the air and forcing hundreds of people to flee rising floodwaters. Volcanic ash drifting across the Atlantic forced the cancellation of flights in Britain and disrupted air traffic across northern Europe, stranding thousands of passengers. Flights in and out of London Heathrow, Europe's busiest airport, were halted, and the shutdowns and cancellations spread to France, Belgium, the Netherlands, Denmark, Ireland, Sweden, Finland and Switzerland. The volcano's smoke and ash poses a threat to aircraft because it can affect visibility, and microscopic debris can get sucked into airplane engines and can cause them to shut down.(AP Photo/Jon Gustafsson) ** ICELAND OUT ** (Associated Press)
--

On Thursday, a migrating ash cloud from Iceland's Eyjafjallajokull volcano caused the closing of airspace over much of northwestern Europe. Although there have been no deaths or injuries, this is easily the biggest air travel story of the year. Thousands of flights have been canceled, stranding tens of thousands of people, and the problem could persist for several more days. The trickle-down effects are going to cost the airlines many millions of dollars, to say nothing of the inconveniences faced by travelers.

Those of you planning to fly anywhere in Europe should check with your airline as soon as possible. Flights beyond Europe, to portions of Asia and the Middle East, could also be affected, as the closures pose complications to long-haul flight planning. Having fewer alternate and diversionary airports available, for example, could mean circuitous routings and payload limitations.

(The name "Eyjafjallajokull," by the way, can only be pronounced correctly after consuming at least six cocktails.)

Volcanic ash is a long-recognized hazard for commercial planes, but typically plumes are localized and easily circumvented. This one is different, having spread horizontally over thousands of square miles, at an altitude between 20,000 feet and 36,000 feet -- smack in the middle of densely packed airspace.

If you're wondering what makes ash dangerous, let me do something I almost never do and allow the Associated Press to do the talking:

"The highly abrasive, microscopic particles that make up volcanic ash pose a threat to aircraft because they can affect visibility and get sucked into airplane engines, causing them to shut down. The ash can also block pitot tubes, which supply vital instruments such as air speed indicators, or latch onto engine blades, forming a glassy substance that may cause engines to surge or stall. Ash will also damage all forward-facing surfaces on an aircraft, such as the cockpit windshields, the wings' leading edges, the landing lights and air filters for the passenger cabin."

Couldn't have said it better myself. (Considering how much grief I've slung at the AP for its normally slipshod aviation reportage, I thought it would be nice to give them kudos on this one. Reporters Robert Barr and Jill Lawless were the writers.)

Back in the 1980s, run-ins with volcanic ash were responsible for at least two near-catastrophes. In 1982 all four engines of a British Airways 747 failed after encountering a plume from Indonesia's Mount Galunggung. Seven years later, a KLM 747 also suffered a total engine failure after flying into a plume near Alaska. In both cases crews were able to restart the planes' engines and make safe emergency landings.

Prognostic tools were not as good back then as they are today. Nowadays pilots receive detailed information on volcanic activity as part of their preflight weather briefing. A series of nine Volcanic Ash Advisory Centers (VAAC) disseminate data for use by pilots and airline meteorologists around the world.