Have you thanked a Supreme Court justice lately?

My letter to the justice who authored the Roe v. Wade decision taught me an important lesson about gratitude 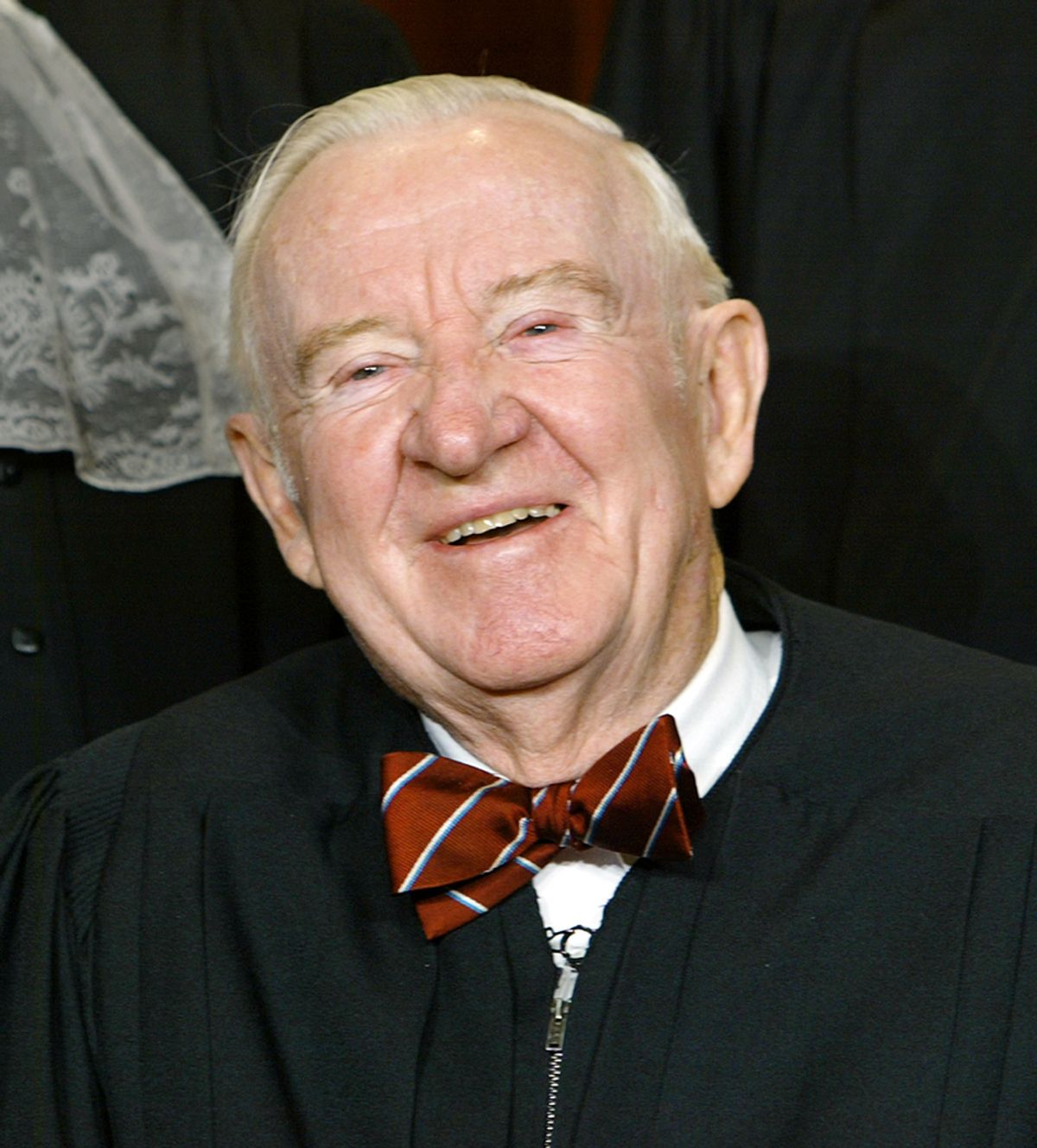 Retiring Supreme Court Justice John Paul Stevens will leave a legacy proving that even a Republican can advocate for the rights of people over major institutions -- private and public -- threatening to swallow them up.

Brought to the federal circuit bench by Richard Nixon, Stevens was nominated to the Supreme Court by President Gerald Ford and confirmed in 1975. Now 89 and having evolved into what many on the right see as the most liberal member of the high court, Stevens -- a one-time Republican who no longer declares a party preference -- is stepping down. This gives President Obama a chance to hold back the conservative Roberts-Scalia-Thomas-Alito phalanx.

Americans stand in awe of Supreme Court justices. Until relatively recently, justices kept an appropriately circumspect distance from public interaction, lest they compromise their judicial integrity. The downside of this distance is that justices accustomed to getting hate mail seldom get words of encouragement and gratitude from citizens who appreciate their wisdom.

In 1983, a decade after he authored the Roe v. Wade decision that made abortion legally available nationally, Justice Harry Blackmun agreed to be interviewed for a cover story in the New York Times Magazine. In that historic departure from judicial silence, Blackmun spoke poignantly of the Roe backlash. He described letters calling him the "Butcher of Dachau" and worse. He pondered retirement.

As the executive director of Planned Parenthood in Rhode Island at that time, I replied to Justice Blackmun with a handwritten note on my office letterhead apologizing that those of us who saw him as a hero had apparently neglected to tell him so. I urged him "not to even think about retirement until the current [Reagan] administration has faded into political oblivion."

He responded within a day, saying how much it had meant to him to hear from someone on the front lines of the abortion issue. He concluded by writing, "I am in your debt." That framed letter still hangs on my bedroom wall, a reminder of how important it is for even isolated justices to hear from the people on whose behalf they interpret the law.

John Paul Stevens has been described as a justice whose opinions could be "idiosyncratic." Once supportive of the death penalty, in later years he wrote eloquently against it. About the concept of trying children under age 16 for capital crimes Stevens wrote:

... that the 'cruel and unusual punishments' prohibition of the Eighth Amendment ... prohibits the execution of a person who was under 16 years of age at the time of his or her offense. In determining whether the categorical Eighth Amendment prohibition applies, this Court must be guided by the 'evolving standards of decency' that mark the progress of a maturing society.

How reassuring that even in the chaos surrounding America today -- with wars raging, corruption and scandal in government rampant, the economy crashing, and terrorist threats forever in the shadows -- we could still be a nation guided by "standards of decency" in a society progressing toward maturity.

A World War II veteran, Stevens often used war and patriotism as metaphors. One of his more conservative opinions -- on flag burning -- stated:

The ideas of liberty and equality have been an irresistible force in motivating leaders like Patrick Henry, Susan B. Anthony, and Abraham Lincoln, schoolteachers like Nathan Hale and Booker T. Washington, the Philippine Scouts who fought at Bataan, and the soldiers who scaled the bluff at Omaha Beach. If those ideas are worth fighting for — and our history demonstrates that they are — it cannot be true that the flag that uniquely symbolizes their power is not itself worthy of protection from unnecessary desecration.

Yet Stevens could also be visionary, as in his majority opinion striking down the Communications Decency Act and establishing clearly that the Internet is protected by the First Amendment. He could also abandon diplomacy when enraged, as he did in his dissent in Bush v. Gore, which called a halt to the Florida recount. "Although we may never know with complete certainty the identity of the winner of this year's presidential election," he wrote, "the identity of the loser is perfectly clear ... It is the nation's confidence in the judge as the impartial guardian of the rule of law."

Perhaps Stevens' greatest gift was his preserving the value of people’s humanity against powerful yet heartless institutions. He did this best last January, when the court gave corporate entities the ability to sponsor political broadcasts. Stevens concluded thoughtfully:

... corporations have no consciences, no beliefs, no feelings, no thoughts, no desires. Corporations help structure and facilitate the activities of human beings, to be sure, and their 'personhood' often serves as a useful legal fiction. But they are not themselves members of 'We the People' by whom and for whom our Constitution was established.

Americans will miss Stevens, who will no longer be there to speak for so many of us. My guess is he has no idea how much we appreciate that humanity and would be moved to know how we shall miss it. You may do like I did with Justice Blackmun and tell him so at:

Mary Ann Sorrentino, author of "Abortion: The A-Word," writes for Salon each Friday. Her email is thatmaryann@yahoo.com