"Death at a Funeral": Crude, dumb -- and hilarious 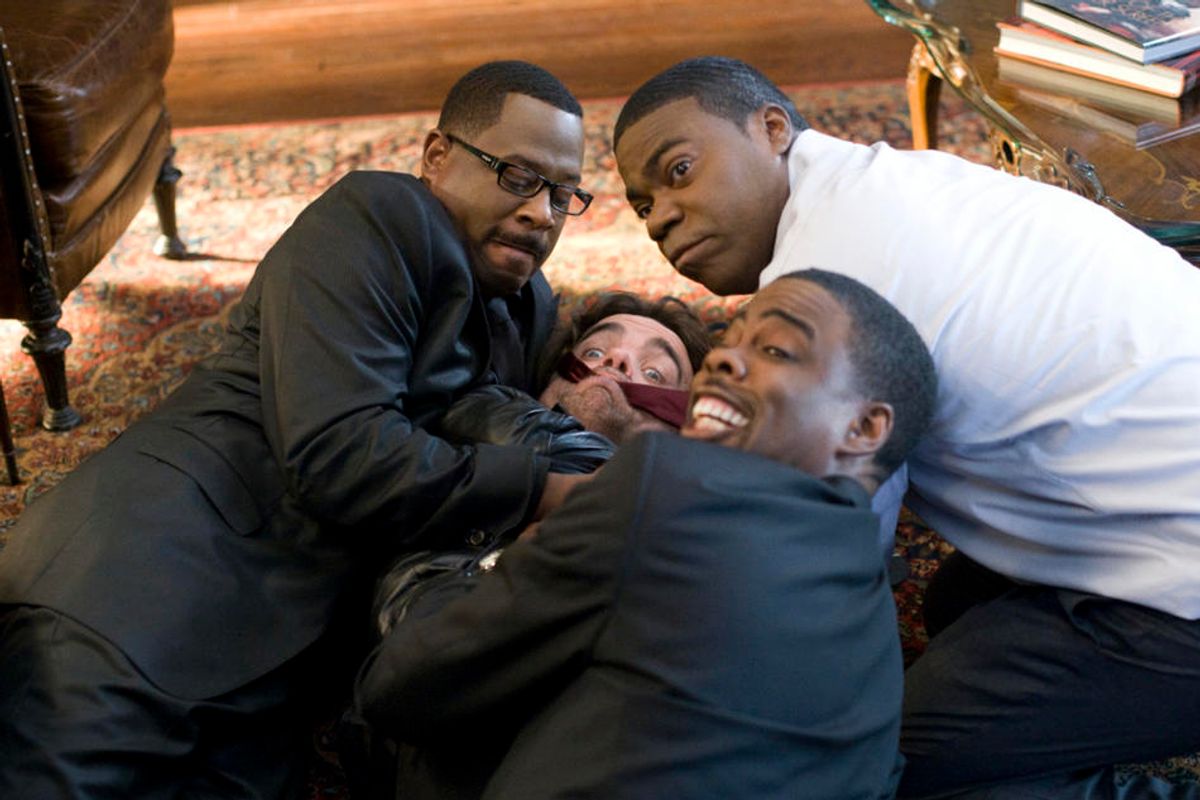 Mel Brooks once claimed that his comedies "rose below vulgarity." The rude farce "Death at a Funeral" treats Brooks' description as a mission statement.

Based almost line-for-line on a same-named 2007 English comedy (both films' screenplays are by Dean Craig), it's the kind of film that plants a Valium bottle secretly filled with experimental psychotropic drugs within the first 10 minutes and quickly contrives to have a character unwittingly swallow one of the pills, busts out a new Cheech and Chong-style, "Oh my God, dude, my hand is a lobster!"-type freakout every few minutes thereafter, and keeps the gag running all the way through the film's closing shot. The director of "Death at a Funeral," Neil LaBute ("Your Friends and Neighbors," "Nurse Betty"), takes the ancient vaudeville maxim "The dumber the joke, the bigger the laugh" and proceeds to prove it as if it were a Pythagorean theorem. He even treats the drug-addled character the way kiddie comedies treat dogs with puzzled faces. (When in doubt, cut to the dog.)

Chris Rock plays the protagonist, Aaron, a wannabe novelist quaking at the prospect of delivering his late father's eulogy and cowed by the presence of his younger brother, Ryan (Martin Lawrence), who made a mint writing trash bestsellers. After a decade in feature films, Rock still isn't much of an actor, and even if he had more technique (and spark), it would be tough to square the beaten-down, writers'-blocked Aaron with memories of Rock the explosive stand-up, shrieking aggrieved one-liners while loping across the stage like the bastard offspring of Don Knotts and Mick Jagger. But he doesn't embarrass himself. He's likably befuddled throughout, and he earns belly laughs whenever Aaron stops stifling his outrage and treats his relatives the way they treat Aaron -- as a figurative or literal punching bag.

But even if Rock stunk, it might not have injured the film, because LaBute has surrounded him with actors who are routinely cast in certain types of roles because nobody does them better.

The deceased's fussy, self-centered, popeyed widow is a Loretta Devine part; Loretta Devine nails it with the laid-back brio of Thelma Ritter playing her 385th wisecracking best friend. The deceased's brother, a paraplegic coot named Russell, is a Danny Glover part right down to the invocation of one of Glover's unfortunate signature lines, "I'm too old for this shit." But rather than phone it in, Glover plumbs previously unseen (and seemingly fathomless) depths of comic nastiness, berating his motor-mouthed hypochondriac caretaker (Tracy Morgan playing a Tracy Morgan part -- a character conveniently named Morgan) and kneecapping Ryan by rumbling, "I wouldn't wipe my ass with your books." The plum role of the mystery guest who shows up with a mortifying secret and a blackmail scheme is clearly a Peter Dinklage part -- not just because the character is a dwarf, but because Dinklage played this very role in the 2007 original.

As the trash novelist brother, Lawrence is smarmy perfection, evading obligations, spreading ill will and caressing his vowels in a late-night DJ's baritone. (His peak moment is a silly walk: crossing a shady street to catch a ride with a borderline-jailbait beauty, Lawrence tiptoe-bounces like a cartoon mouse sneaking toward a plate of cheese.) Zoe Saldana ("Avatar") is just right as a frazzled beauty resisting the advances of her self-regarding ex-boyfriend (Luke Wilson in a Luke Wilson part) while trying to keep tabs on her current love, Oscar, the poor dope that downed the extra-strength Wonderland pills. ("I'm inside a lime!" he beams.) Oscar is played by James Marsden, a brilliant young actor who's been equally convincing as the mutant warrior Cyclops in the "X-Men" franchise, the patient husband in "Superman Returns" and the singing-and-dancing variety show host in "Hairspray." Marsden outdoes himself here. Whether hollering into palm fronds, rooting around in a garden like a dog in heat, or doing nude pratfalls on a roof, he seems not just comfortable, but blissfully happy.

The original "Death at a Funeral" was set in England but directed by an American ringer, Frank Oz ("Bowfinger," "Dirty Rotten Scoundrels"). This version replaces the original's white English actors with a predominantly African-American cast and relocates the story to Los Angeles and pencils in new names, Yankee profanity and references to Michael Jackson, R. Kelly and Screamin' Jay Hawkins. Other than that, it's the same movie: a comedy that invents nothing and is content to be a well-oiled machine, setting up and knocking down gag after well-worn gag.

LaBute, who built his reputation on venomously cruel social comedies, here settles for a slightly anonymous chilliness and a mainstream studio director's determination to play things as plainly, sometimes obviously, as possible. When the film isn't italicizing its emotions with an insufferable, "Aren't we all having a marvelous time?" score and fracturing otherwise strong moments with hyperactive cutting, "Death at a Funeral" works and then some. The movie is labored, overly familiar and about 10 miles away from deep -- an elemental, sometimes excremental comedy about petty twits behaving badly. As totally unnecessary remakes go, it's one of the best.

Death At A Funeral Movies Our Picks