On the Supreme Court, not a lot of respect for Elena Kagan 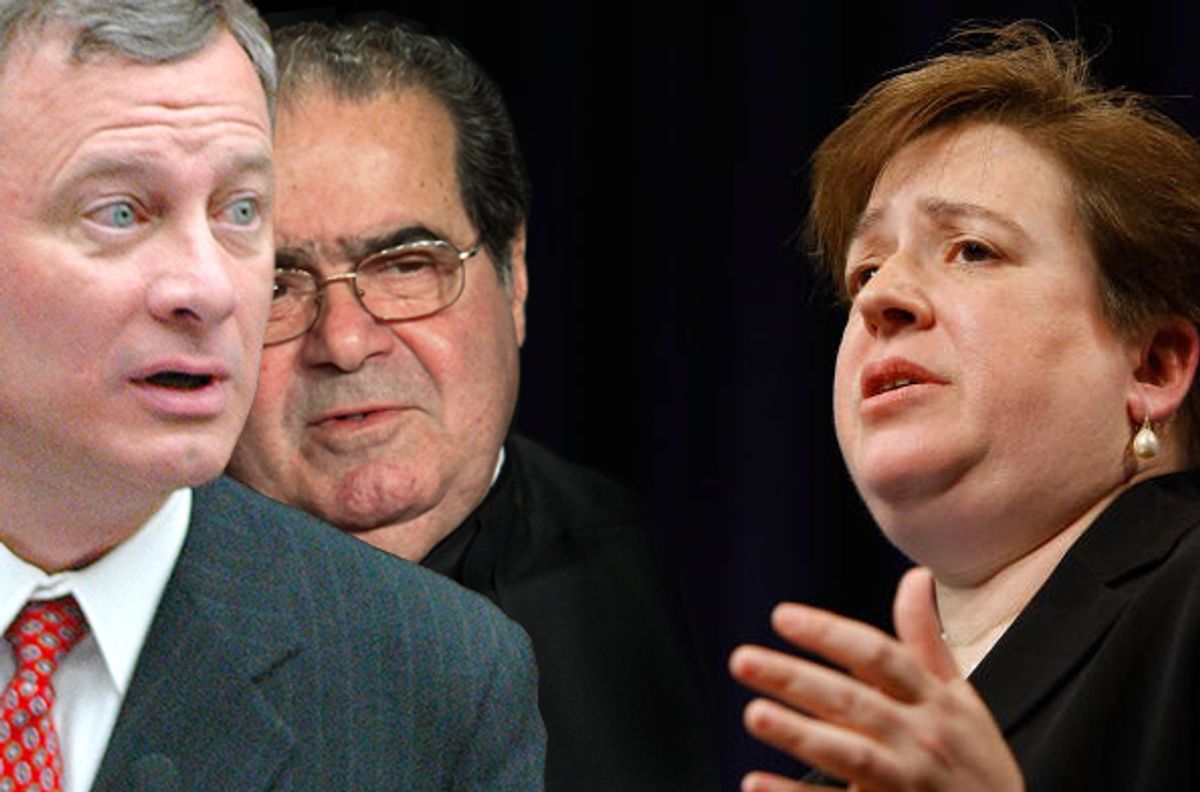 WASHINGTON - MAY 20: U.S. Solicitor General Elena Kagan addresses the forum "Striking the Balance: Fair and Independent Courts in a New Era" at Georgetown University Law Center May 20, 2009 in Washington, DC. A former Dean of the Harvard Law School, Kagan's name has been included on many peoples' short list of possible candidates to the Supreme Court to replace Justice David Souter, who is retiring this year. (Photo by Chip Somodevilla/Getty Images) (Chip Somodevilla)
--

In the extensive speculation about Elena Kagan’s potential nomination to the Supreme Court, left-leaning commentators have mainly debated whether Kagan’s ideological instincts are sufficiently liberal.

Largely overlooked, though, is an issue that is ultimately more far-reaching: whether Kagan would be an effective liberal on the court -- that is, whether she has the skills to win over Anthony Kennedy, who casts the decisive vote in nearly all of the court’s most closely divided cases, and whether she could match wits with Antonin Scalia and John Roberts, the court’s conservative fire-breathers.

Based on a review of the transcripts of Kagan’s appearances before the court as President Obama's solicitor general, there is little reason to believe that she possesses particular deftness on either front. Even more surprisingly, Kagan has not infrequently raised the ire of the court’s more liberal members, her supposed ideological allies. The data points are few (she has argued only six cases before the court), but they give little reason to believe that her transition to the court would be made with anything approaching seamlessness.

Kagan’s very first oral argument -- in the landmark Citizens United case -- is emblematic. The first interruption came about three sentences into the argument: "Wait, wait, wait, wait." That was Justice Scalia, convinced that Kagan had gone awry on her very first point. Kagan’s attempted explanation went nowhere. Scalia, again: "I don't understand what you are saying."

When John Paul Stevens tried to suggest a potential answer to Kagan, she missed the cue, prompting the normally patient Stevens to remark, "I don’t think you really caught what I suggested."

Things got no better during the rest of Kagan’s half-hour at the podium. At about the 29-minute mark, Ruth Bader Ginsburg asked about the government’s apparent switch in position over the course of the case. Here, according to the transcript, is how Kagan's reply went: "'The government’s answer has changed, Justice Ginsburg.' (Laughter.)"

To a certain extent, Kagan’s troubles were not of her own making. Through various procedural maneuvers, the court had suggested long before her argument that it would hold against the government, so Kagan cannot fairly be called the author of the government’s Citizens United loss.

But she certainly didn’t do herself or the United States any favors. When the case was argued in September 2009, a modest defeat was still well within the realm of possibility, provided that Kagan could secure Kennedy’s vote. But she seemed oddly unconcerned with addressing his qualms. At one point, Kennedy asked Kagan to address a particular issue, which she had labeled "point two" in her opening remarks:

Kennedy: In the course of this argument, have you covered point two? ... I would like to know what it is.

Kagan: I very much appreciate that, Justice Kennedy. I think I did cover point two.

She quickly moved on. Four months later, Kennedy wrote a 5-4 opinion that handed Kagan and the U.S. government a sweeping defeat.

In subsequent arguments, Kagan has proven no more adept at assuaging Kennedy’s anxieties. In a recent case, Kennedy’s question about a particular piece of legal precedent was met with, "I -- I am not familiar with that case." In another argument, Kennedy suggested that Kagan was dodging the crux of his hypothetical: "No, no, no. That makes ... my hypo too easy for you." And in yet another case, Kagan was unable to muster a coherent response to Kennedy’s request for case law supporting the government’s position.

Kagan’s attempts at pacifying the court’s conservatives have similarly faltered. It’s hardly surprising that justices like Scalia and Roberts would disagree with the positions taken by a representative of the Obama administration. What is noteworthy, though, is the curtness with which they’ve done so.

For example, in a case challenging the constitutionality of a key provision of Sarbanes-Oxley, the 2002 law that in part established a new government agency to supervise auditing firms, various assertions by Kagan were brusquely dismissed: "No, but that’s not true" (Scalia); "Oh, no, no" (Roberts); and "No" (Roberts again).

Kagan’s most recent argument, Robertson v. United States, played out much the same way. There, Roberts called one of Kagan’s assertions "absolutely startling." And when she supported one legal point with the claim that "[t]he United States Government is a complicated place," Roberts remarked sardonically, "I take your word for it." Later, when Kagan returned one of Scalia’s questions with a query of her own, Roberts offered a subtle but unmistakable rebuke: "Usually we have questions the other way."

Notably, the rough treatment has not just come at the hands of Roberts and Scalia. Their left-leaning colleagues have occasionally been equally exasperated by Kagan: "[T]hat’s not what I’m talking about" (Stephen Breyer); "I don’t understand that point at all" (Sonia Sotomayor); "That is not my question" (Stevens).

These mild reprimands might seem like unexceptional bits of standard judicial give-and-take, but there are several reasons to think they might signify something more meaningful. For one, the Supreme Court is a place of exceeding decorousness. In the unfailingly civil world of court proceedings, even minor impoliteness can indicate severe misgivings.

This is all the more true given Kagan's role as solicitor general, a position often referred to as the "tenth justice," because of the frequency with which the court consults his or her views. A relationship of respect and trust typically develops between the justices and the solicitor general. Thus, any signs that the bond between the two is fraying -- or nonexistent -- is noteworthy.

It is worth remembering, too, that well before Kagan’s first Supreme Court argument, she was rumored to be on Obama’s short list for any future court opening. When the justices interrogate Kagan, they know they’re speaking with someone who may well be a future colleague. Telling, then, are the occasional slips in the court’s typical mask of politeness.

We cannot know for sure whether the justices’ occasional frustrations with Kagan -- and Kagan’s occasional obtuseness -- are predictive of her future relationships with her potential co-workers. And, to be fair, she has exhibited occasional adroitness as solicitor general, and her work as dean of Harvard Law School in corralling the notoriously fractious faculty suggests that both accommodation and conciliation have slots on her tool belt.

Still, there’s no evidence in her interactions with the justices so far to suggest that she possesses an intuitive understanding of their concerns, or that they harbor a natural respect for her positions. That hardly disqualifies her as a Supreme Court nominee. But if, come the next Supreme Court term, Justice Kagan’s colleagues find her occasionally tone-deaf and only intermittently persuasive, no one can say there was no warning.