It's your Most Important Day Ever. So why is the caterer stealing your liquor with your cake in his mouth? 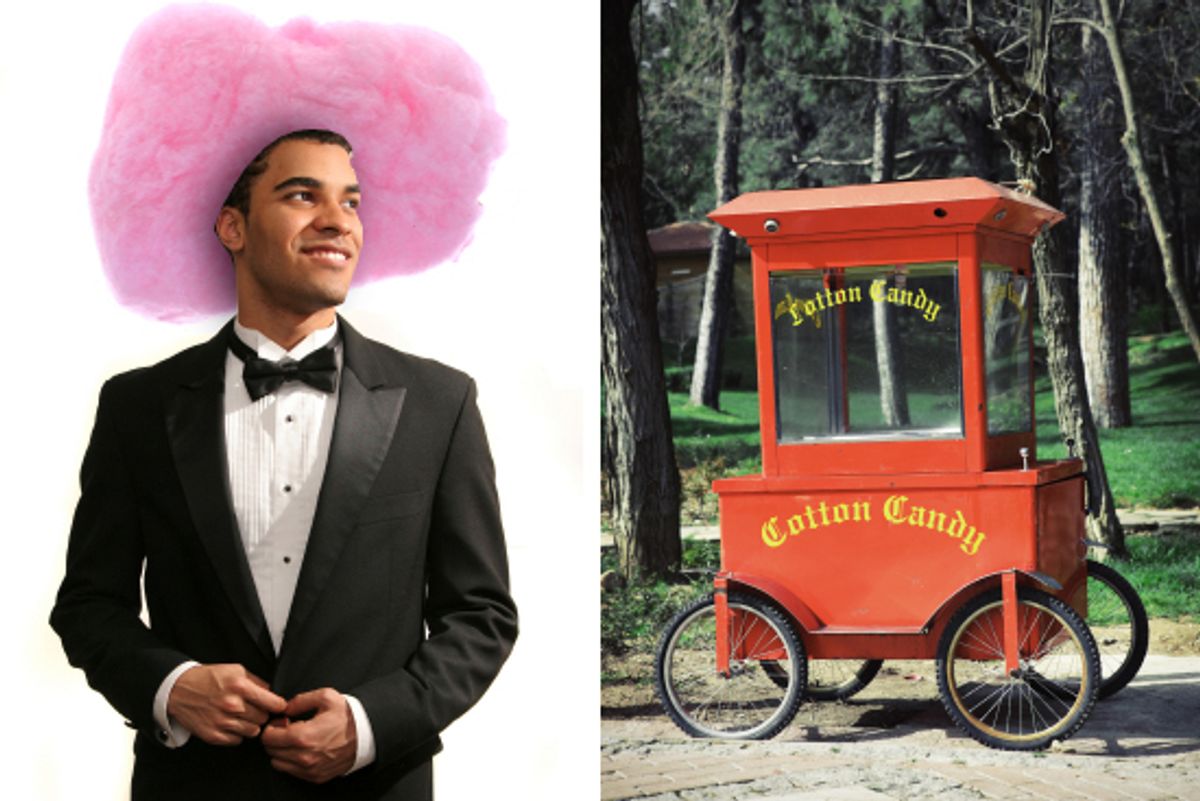 For a few wonderfully anthropological years, I made my money as a cater-waiter in a stately old building in town surrounded by faceless suburbs and cornfields, which is to say that I have ended up working more weddings than Liz Taylor. I've heard the theme from "Titanic" more times than James "King of the World" Cameron, I've seen people straight-up own the Electric Slide, I've seen a henhouse's worth of Chicken Dances.

To a cater-waiter, these things are as inevitable as death and people complaining about taxes. There's a certain strange jadedness you develop, though, when someone's Most Important Day Ever is, for you, just another day in which you punched in for work. You stop noticing, for example, what the bride is wearing or how proud the happy couple is. You start to hope, for example, that the guests get wasted, because a bigger liquor tab means bigger tips, and, really, because that's when the fun starts.

Like the time I saw the dance floor entirely empty except for the bride's grandma, dancing her wonderful, white-headed ass off to Clarence Carter's Strokin'. (And if you don't know that classic jam, it is definitely NSFW, unless your work is awesome.) Or the time the bridal party invited me to get on the dance floor with them, and I started grinding with the lady in white. Yes, I freaked the bride. People took pictures.

This was also a period of my life where I ate most of my meals at work, and that eventually led to an inappropriate familiarity with the food behind closed doors. More than once I have served wedding cake to a happy bride and groom while noticing their cake crumbs still stuck to my mouth.

I'm telling you all this because despite my rather loose-cannon social skills, I was actually a good cater-waiter, charming and efficient and sometimes even wearing a clean tuxedo shirt I bought at the mall prom-rental headquarters. And so I read with interest Rachel Holmes' post the other day on wedding catering nightmares at the Guardian's food blog.

Some of these were, in fact, nightmarish: "23 May 1891, a British Medical Journal article tells of 'Wholesale poisoning at a wedding feast'. 60 guests sat down to enjoy a banquet of gluttonous delights. Only 20 of them got up again. The rest were rolling around on the floor, clutching their bellies and having seizures."

Happily, most of her stories -- and the ones in the comments -- were of a less fatal wedding nightmare variety: lightsaber decorations for wedding cakes melting into "flaccid worms by serving time" and grooms cooking for their own weddings with broken ankles, hopped up on morphine and lots of drink ("Happiest day of my life!"). Or my favorite one, from a woman who rented a cotton candy machine, which turned out -- surprise! -- to be a liability around drunken men:

"[It] resulted in [my] brother-in-law trying to candyfloss his head a la Marge Simpson. Which WAS an inspired idea but sadly one that was doomed to failure -- you end up with a head covered only in itchy pink sugar crystals and a broken machine that sends all future candyfloss attempts flying up the walls and ruining the caterers' beautiful black velvet curtains."

There comes a time in every wedding caterer's life, though, when nearly any clusterf&#*k can be put into perspective with the phrase, "Hey, at least there was no violence." Because a possessed cotton candy machine is really nothing compared to wedding violence.

Like, for example, the time my manager Lisa decided, a half-hour before the reception was supposed to end, to shut down one of the two bars because people were getting, well, sloshed. The groom must have sensed a disruption in the Liquor-Force, because he marched up to her and, straight-up Darth Vader-style, grabbed her by the face and said, "Little girl, you are going to leave the bar open." I stood by, small and afraid, and now, in retrospect, see I should have been wishing for one of those lightsaber cake decorations. Lisa stayed firm and composed, and the groom realized that having the second bar for another 30 minutes probably wasn't worth a night in the poky, but then his darling bride ran up from the dance floor. When she saw what was happening, her eyes grew wide and enraged. She began screaming. "You bitch! You bitch! I'm going to remember you for the rest of my life! You're going to be the bitch that ruined my wedding!"

Her new husband held her, pulling her away, trying to calm her down, and I wondered who, exactly, was ruining what here. I watched the wedding videographer get this all on tape. We resuming packing up the vodka, when suddenly Princess Drunk-Leia broke free from the groom and charged back at us, windmill punching and looking for blood. The groom took three lightning steps and tackled her, holding down her arms lest she actually whack us and let an army of lawyers ruin their honeymoon, too.

That was the night I learned the secret to why all weddings list toward disaster: the Law of Asymmetrical Giving-a-Shitness. Honestly, I cared about that job -- I cared about it very much, in fact (and it eventually inspired me to this glorious career of scribbling about food). But I walked into that reception hall every Saturday hoping to feel the pride of a job well done, and the bride and groom walked in thinking this will be the day they ride a unicorn into the sunset if only the fairies don't pick them up and carry them off first. NOT THE SAME.

The fact is that there is an unbridgeable gap of emotional investment when you have this yawning disconnect between a lifelong fantasy and the human, mundane reality of caterers just doing their jobs and having to follow boring old rules like not letting people drive home half-passed-out from Long Island iced teas. What's really interesting about weddings aren't the vows and the joining of clans -- it's the fact that you have people living on totally different planets while being in exactly the same room, and those planets freak out when they're reminded of one another.

So, as this wedding season rears its insane head, let's all keep that in mind. And while we're waiting for it, let's hear stories of your favorite wedding train wrecks in the comments!