In the spirit of the original tea party, activists should be demanding accountability from Wall Street 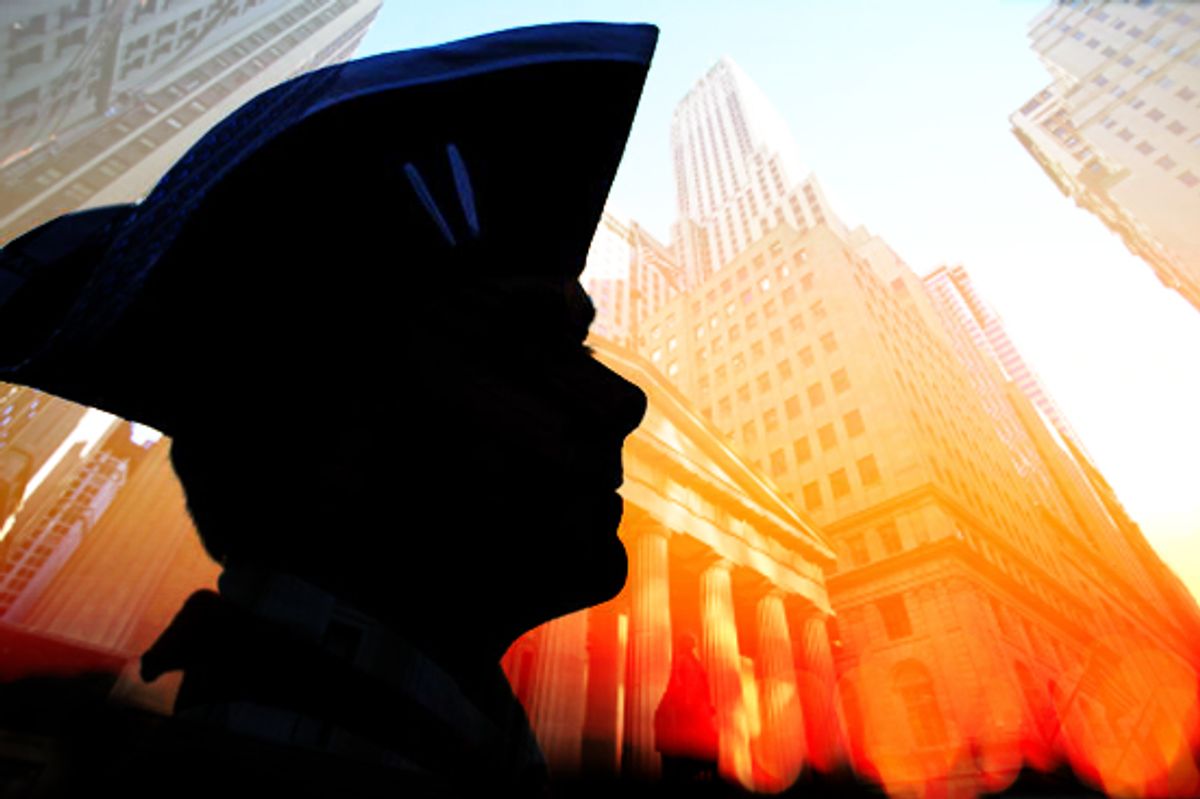 With all due respect, we can only wish those Tea Party activists who gathered in Washington and other cities this week weren’t so single-minded about just who’s responsible for all their troubles, real and imagined. They’re up in arms, so to speak, against Big Government, especially the Obama administration.

If they thought this through, they’d be joining forces with other grassroots Americans who in the coming weeks will be demonstrating in Washington and other cities against High Finance, taking on Wall Street and the country’s biggest banks.

The original Tea Party, remember, wasn’t directed just against the British redcoats. Colonial patriots also took aim at the East India Company. That was the joint-stock enterprise originally chartered by the first Queen Elizabeth. Over the years, the government granted them special rights and privileges, which the owners turned into a monopoly over trade, including tea.

It may seem a bit of a stretch from tea to credit default swaps, but the principle is the same: When enormous private wealth goes unchecked, regular folks get hurt — badly. That’s what happened in 2008 when the monied interests led us up the garden path to the great collapse.

So the Tea Party crowd should be demanding accountability from Bank of America, Citigroup, Goldman Sachs, JPMorgan Chase, Morgan Stanley, Wells Fargo, and scores of hedge funds and private equity firms that constitute what we loosely call Wall Street.

But are the culprits taking responsibility for devastating the lives of millions of ordinary Americans? Don’t kid yourself. If you’ve been watching them appear before congressional committees and the Financial Crisis Inquiry Commission — the independent inquiry that’s supposed to find out what really happened — you’ve no doubt been reaching for the Pepto-Bismol.

Here’s Robert Rubin, former treasury secretary and director of Citigroup, testifying last week: "Almost all of us involved in the financial system, including financial firms, regulators, ratings agencies, analysts and commentators, missed the powerful combination of forces at work and the serious possibility of a massive crisis. We all bear responsibility for not recognizing this, and I deeply regret that."

OK, maybe you didn’t have a crystal ball. But what about good old-fashioned business sense? How could you make so much money and not know the score? "You are talking about a level of granularity no board will ever have," Rubin claimed. Citi paid you $120 million as a senior advisor and rainmaker and you’re not responsible for knowing what’s happening below you? You didn't bother to assess the risk you were peddling to clients?

The committee heard a similar alibi from Chuck Prince, who served as CEO of Citigroup during its meltdown: "Let me start by saying I'm sorry. I'm sorry that the financial crisis has had such a devastating impact on our country … And I'm sorry that our management team, starting with me, like so many others, could not see the unprecedented market collapse that lay before us."

Commission chairman Phil Angelides, the former state treasurer of California, wasn’t buying it. "The two of you, in charge of this organization, did not seem to have a grip on what was happening," he said, and to Rubin, "I don’t know that you can have it two ways: You were either pulling the levers or asleep at the switch."

Nonetheless, the financiers wail, it was all an enormous accident, a once-in-a-century calamity, an act of God. But of course that’s not true. Lots of people saw it coming and made a bundle, taking off with the loot at the expense of the millions who lost their jobs, homes and savings. There’s no longer any question that many bankers continued to game the system after the collapse — still paying themselves exorbitant salaries and bonuses while hitting everyday people with usurious same-day paycheck loans, credit card fees and other charges — and refusing to help small and medium-sized businesses that could be creating employment.

The Tea Party gang really should have dropped by those Senate hearings this week looking into the failure of Washington Mutual, the bank that went belly up during the meltdown in September 2008 — the largest such failure in American history.

As an 18-month Senate investigation revealed, WaMu made subprime loans that its executives knew were rotten, then packaged them as mortgage securities and pawned them off on unsuspecting investors. Loan officers were paid by the number of mortgages they sold, and they ran up the numbers by lying to customers and falsifying data so they could make bigger bucks and win trips to Maui and the Caribbean. At one Washington Mutual office in Montebello, Calif., 83 percent of the housing loans contained bogus information.

Then there’s Lehman Brothers. Their misfortune, apart from some chicanery only now coming to light, was being small enough to fail. During those black September days two years ago, the feds decided it was expendable and let it go, leading to America’s biggest bankruptcy ever. In an admirable job of journalism this week, the New York Times reported that Lehman secretly controlled a company called Hudson Castle. Critics say it was used by Lehman to borrow money and to hide bad investments in commercial real estate and subprime mortgages.

But the week’s award for sheer gall goes to a Chicago-area hedge fund called Magnetar, named after a kind of neutron star that spews deadly radiation across the galaxies. Thanks to the teamwork of the investigative reporting Web site ProPublica, as well as public radio’s Planet Money project and "This American Life," we learned that Magnetar worked with Citigroup, JPMorgan Chase, Merrill Lynch and other investment banks to create toxic CDO’s — collateralized debt obligations — securities backed by subprime mortgages that management knew were bad. Then Magnetar took that knowledge and bet against the very same investments they had recommended to buyers, selling short and making a fortune.

To simply call all of this "creative accounting" is to do it an injustice. This is corruption, cynicism and greed on a scale that would make the Roman emperor Caligula cringe. Or rather, the emperor Nero. He didn’t just poison the citizens of Rome; legend has it that he burned the place down, fiddling around in the ashes, just like our Wall Street tycoons.

But since we know all this, why is it so hard to hold Wall Street accountable? Which brings us to what the Tea Party people should have been complaining about this week. The banking industry and corporate America are fighting against proposed financial reform with all the money and influence at their disposal, attempting to preserve a system that would enable them to ransack the country once again.

Look at Eric Lichtblau’s report this week, also in the New York Times, under the headline. "Lawmakers Regulate Banks, Then Flock to Them." The financial services industry has hired more than 125 former members of Congress and congressional staffers from both parties to help them fight off accountability.

No wonder, too, that this headline appeared in the Times this week: "GOP Takes Aim at Plans to Curb Finance Industry." That’s not surprising. Earlier this year Republican politicians told Wall Street: Give us the scratch and we’ll scrap reform.

The GOP’s SWAT team — also known as the U.S. Chamber of Commerce — has already spent $3 million to try to kill or cripple a key part of reform — the proposed new Consumer Financial Protection Agency. With the chamber as their front, corporations have bankrolled ads that make it seem like the Red Army is at our doorstep.

Advocates for reform have countered with ads of their own, but Democrats are deep in hock to Wall Street, too. Remember the hedge fund Magnetar that bet against its own products? The owners covered their bets with ample campaign contributions to Rahm Emanuel. Yep, the same — President Obama’s White House chief of staff. At the time he was U.S. representative from Illinois and chair of the Democratic Congressional Campaign Committee, which collected millions of dollars from the financial services industry.

In fact, the Web site Politico.com reports that "the nation’s ten richest hedge fund managers have dumped nearly one million dollars into campaign accounts over the past several years ... consumer advocates and critics from other financial sectors say hedge funds would get off pretty easily" under the Senate reform bill.

Bottom line: "The Wall Street banks are the new American oligarchy — a group that gains political power because of its economic power, and then uses that political power for its own benefit." So write Simon Johnson, former chief economist at the International Monetary Fund, and James Kwak, former management consultant and software entrepreneur, in their important new book, "13 Bankers: The Wall Street Takeover and the Next Financial Meltdown."

Their words of warning and the past year and a half make you realize that as usual, Thomas Jefferson, whose birthday we celebrated this week, had it right. Back in 1816, he wrote, "I sincerely believe ... that banking establishments are more dangerous than standing armies."