"Party Down": The best comedy you haven't heard of 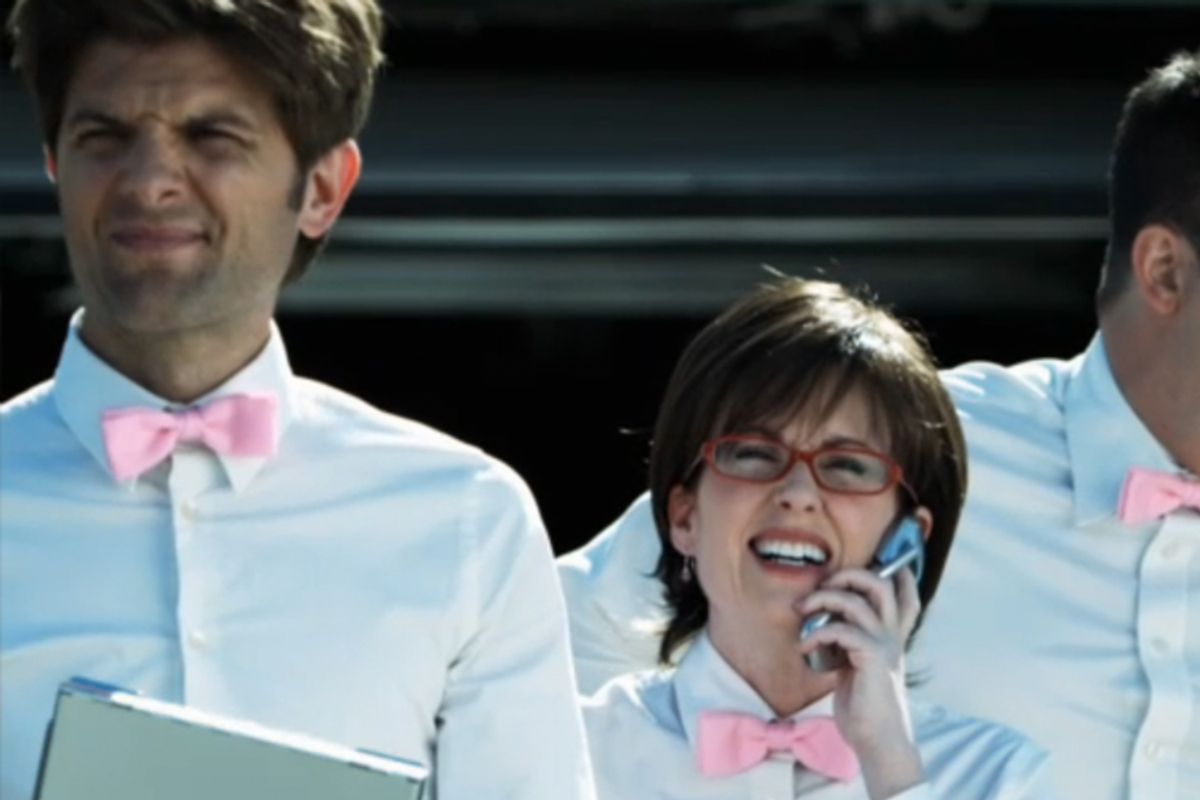 Adam Scott and Megan Mullally in "Party Down."
--

Is it shameful to have dreams that might not come true? Most of us keep our dreams hidden, safe from the public's contempt. Why expose yourself and risk being called a dreamer, just another writer who boldly sends his manuscript to a publisher only to get a reject slip back in the mail, or a singer who shows up to the "American Idol" audition, only to have Simon Cowell tell her she's pathetic and untalented and she should go back to flipping burgers? (Easy enough to instruct others to stick to hard labor when you get paid to smirk and roll your eyes all day.)

But then you have the Susan Boyles and the Justin Biebers of the world, tipping the scales in the other direction, giving you hope that your dream might just come true one day. You just have to believe in it with all of your heart!

But are you just deluded? How do you parse these two equal and opposite forces? Should you make your creative destiny into a religion? Or should you give in to the suspicions — that haunt every last one of us, from the lowliest shut-in scribbling out poems in his basement apartment to the most acclaimed novelist — that you have no talent and should just hang it all up right now and stop kidding yourself?

This is the driving question at the heart of Starz's "Party Down" (premieres 10 p.m. Friday, April 23), a brilliant half-hour comedy inhabited by creative types — actors and writers — working for a catering company in Los Angeles. The dilemma of the day job — do I keep myself afloat with this meaningless toil, or do I follow my dreams to bankruptcy and beyond? — looms ever present here. The characters not only struggle with their own choices — whether to believe in themselves or give up on their dreams, whether to show up for another audition or hang it up for some more lucrative pursuit — but also confront the specter of other people's success (or failure) on a daily basis. They are caterers, after all, those polite adults in white shirts and little pink bowties who serve bite-sized caviar canapés to successful producers and famous actors and wealthy housewives and rock stars, ideally while making themselves as invisible as possible.

The irony, of course, is that these waiters are anything but invisible, and these rich, successful, famous people who eat off their trays are just as neurotic and frustrated and disempowered as they are. From the enraged producer who spends an entire afternoon barking into his Bluetooth earpiece to the former comedian who tells Casey (Lizzy Caplan) that being a housewife is far more relaxing than showing up for auditions (but looks prepared to murder someone if it will make her silent auction a success), the wealthy denizens of Los Angeles hardly seem satisfied. Although our heroes struggle with the question of whether to endure another day at such a demeaning job, they witness direct proof that, even if all of their dreams come true, life over the rainbow isn't as relaxing and special as it looks from a safe distance.

Even so, "Party Down" skewers the self-involvement of struggling creatives and the self-indulgence of the rich and famous with equal enthusiasm. Take the lead singer of a satanist band called Jackal Onassis who, at a backstage party, confesses to catering crew members Henry (Adam Scott) and Roman (Martin Starr) that he's exhausted by his "gilded cage."

Rock Star: You know, I wanted all this. It's my fault. I wanted this fame, success. You guys know the gypsy's curse?

Rock Star: When you get everything you wish for? That's my curse.

Henry: Sorry to hear about that. Uh, we actually have to go.

Rock Star: What, do you have real-life responsibilities, man? I wish I had those. I want those. I have a fake life. I have fake friends, fake conversations, fake experiences.

Roman: The pussy, the money, it's real.

Rock Star: Look, the pussy's here for the fame. What's money? It's mortar holding up stinking walls of bullshit! You know what I wish I could buy? This. Just being you guys. You know, a real guy. An ordinary job!

Roman agrees to trade places with the Rock Star for the night, so he can get girls and the Rock Star can feel ordinary. The Rock Star, who now refers to himself as Dennis, takes a spot behind the bar and immediately sets about "shooting the shit" (just like a regular person!) with Henry. Henry dryly informs him that there's nothing to talk about, because the catering business is boring.

"Try doing it hundreds of times," Dennis fires back.

"Party Down" is certainly not boring. Unlike so many of the disappointingly superficial, repetitive shows on TV this season, this comedy not only features great jokes and dynamic dialogue but also rolls out provocative stories week after week, thanks to the depth of the show's central premise. The constant clash between haves and have-nots, the contrast between dreamers and those who've achieved their dreams and are still dissatisfied, provide one deliriously funny subplot after another. In one episode, frat boy caterer Kyle (Ryan Hansen) grills an older black man about what the blues are really about. The man ends up persuading Kyle to fetch him drinks and shine his shoes on his hands and knees, telling him that he won't understand the blues until he completes every task without questioning it. In another episode, the crew hangs out at Steve Guttenberg's mansion, where Guttenberg (who Kyle immediately christens "The Goot") gamely pours them great wine and gives them a tour of his idiotic overpriced art collection (including an original "Spankler"), then instructs them to follow their dreams but gets distracted whenever they ask him for practical advice on the matter.

Rather than helpful advice, what the aspiring actors, comedians and writers on staff get is discouragement, again and again — from their agents, from their parents, from their boyfriends and girlfriends, and from each other. The only one of them who seems immune to negative feedback is Kyle, a happy-go-lucky, shallow simpleton whose unflappable confidence drives his co-workers crazy. "You're not even an actor — you're a haircut," Roman tells him. "You know the difference between you and James Van Der Beek's parrot? The parrot can deliver a line. Whatever high school drama coach filled the void between your ears with big ideas, probably just wanted to give Little Kyle a couple tugs. He had no idea he was creating a monster, fucking Can't Act Creature from the No-Talent Lagoon!" Kyle responds by crying until Roman apologizes, then he laughs in his face. Gotcha, sucker!

Those who worry that "Party Down" might lose a lot of its flair with the departure of Jane Lynch (who left to play Sue Sylvester on "Glee") need not fret: Megan Mullally (Karen from "Will & Grace") finally has another chance to showcase her enormous talents as Lydia, a middle-aged single mom who moved to Los Angeles from a very small town so her 13-year-old daughter, Escapade, could pursue an acting career. Mullally seems to be conjuring the geeky enthusiasm of Sarah Palin in this role, and ushering up the same chipper approach to darkness that makes Palin particularly creepy:

Lydia: You're so pretty, you have to be an actress.

Casey: No, I'm actually a comedian.

Lydia: Oh! Ed, my ex? Hates Whoopi Goldberg. He said that women shouldn't do comedy, because they're not naturally funny.

Casey: Well, club owners, a lot of them think that way.

Lydia: And he has issues with blacks. So, why he would have an affair with one… that is a question for a psychologist! Or, as Ed would say, a Jew faggot!

Yes, "Party Down" takes advantage of its freedoms as a cable channel, but even when things get off-color or obnoxious, these characters stay in character instead of changing into unfamiliar people for the sake of comedy. In fact, even though "Party Down" features a steady flow of absurd jokes and funny situations, it still offers more of a consistent, realistic, lively story than dramedies like "Weeds," "The United States of Tara" or "Glee."

Most of all, though, "Party Down" looks beyond the black-and-white messages our culture sends us about dreams and the creative life and success and failure, to show us the gray area in between. Even though we assume that the acclaimed novelist is automatically happy while the unknown, unpublished novelist is a depressed loser who's wasting his time, success brings far less of a guarantee of happiness than does an enjoyment of the work itself.

The dream may be beside the point entirely. If you enjoy the process and improve and learn every day, then success or failure is a footnote in your story. Likewise, if you're distracted by the spoils, if you're transfixed by a notion of "arriving" or being "done" with work — if you desire the ends more than the means, in other words — you may be dooming yourself to failure.

At a time when our TV screens are crowded with shortcuts — snappy pilots that were sold before they were fully formed and are now doomed to repeat themselves endlessly — "Party Down" is obviously a labor of love. Even with so many great lines and absurd asides thrown into the mix, most of all, this show is about our biggest, most cherished hopes and dreams, and how we sometimes use them to shield us from being happy right here, right now.