Straight to DVD: "Tenderness" and "Peacock" 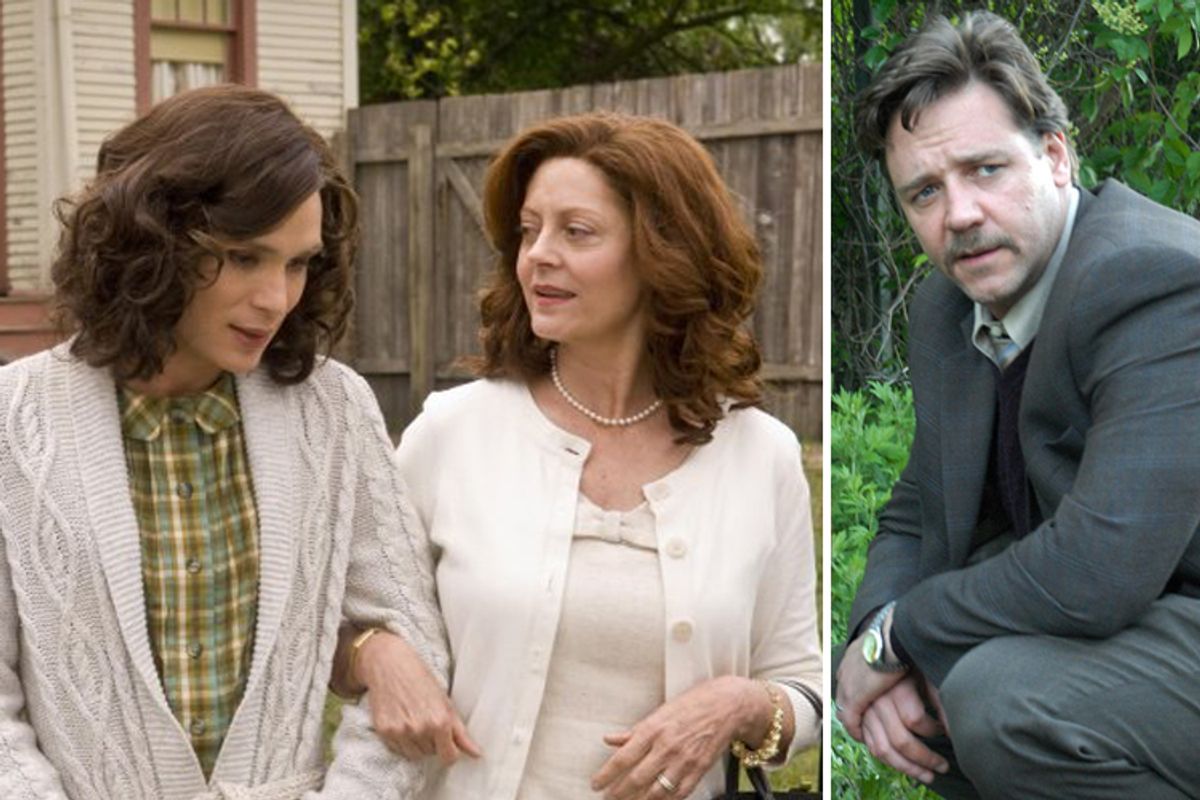 Cillian Murphy and Susan Sarandon in "Peacock" and Russell Crowe in "Tenderness."
--

This corner of Film Salon is usually the dumping ground for cage fighting movies with "Stone Cold" Steve Austin and slasher flicks hosted by Flavor Flav, but this week I've got a pair of films that boast a combined three Oscar winners, a best-actress nominee and a two-time Golden Globe winner. Consider this sudden deluge of talent to be a kind of upscale outlier. Rest assured, I'll be back to pondering the greater meaning of lesbian vampire epics and rock 'n' roll werewolf programmers soon enough.

"Tenderness," based on the 1997 novel by Robert Cormier, did make it into limited release mostly based on the star power of Russell Crowe in a top-billed supporting role. Since most of us are seeing it on the small screen for the first time, here it is. Lori (Sophie Traub) is a confused 16-year-old who re-enacts previous sexual abuse by making out with an older man she picks up at a gas station or pulling up her shirt while her boss at the supermarket strokes himself. She's obsessed with Eric Komenko (Jon Foster), a kid who murdered his parents with his archery set but got off with a light sentence by claiming that anti-depressants drove him into a parricidal rage.

Sharing her obsession is Detective Christofuoro (Crowe), a Buffalo, N.Y., cop with an ailing wife who believes that Komenko is responsible for the unsolved murder of a teenage girl found in an upstate New York lake. Lori keeps a scrapbook with newspaper clippings of the Komenko killings while Christofuoro pores over crime scene photographs at 24-hour diners. "You're a psychopath, Eric," Christofuoro tells Eric during one of the youth's last days in a juvenile detention facility, "You're going to kill again. You know it and I know it. And I want to prevent that from happening."

The detective is right about Eric. He is going to kill again and even has plans to meet his next victim at a dilapidated amusement park near Albany. On his way to his murderous rendezvous, Eric discovers that Lori has stowed away in the back of the Volvo station wagon he inherited from his slain parents. Eric can't bring himself to get rid of Lori either by ditching her on the side of the road or strangling her with a rolled up length of cloth towel ripped out of a bathroom dispenser. Lori engages in a push-pull with her idol, attempting to entice him with a clumsy sexuality that she doesn't seem to grasp. Traub's performance as Lori recalls a young Juliette Lewis in Scorsese's "Cape Fear" (1991), except that Traub brings far more nuance to her portrayal of a damaged teen. For his part, Foster captures homicidal compulsion mixed with small moments of pause. He hesitates to grab that claw hammer and tries to stop himself from fashioning a makeshift garrote, but in the end, he remains a prisoner of his urges.

"Tenderness" is directed by Jon Polson, who helmed the more cookie-cutter thriller "Swimfan" (2002) and appeared as an actor alongside Crowe in the gay-themed comedy-drama "The Sum of Us" (1994). Crowe, who was in between filming "Cinderella Man" (2005) and "3:10 to Yuma" (2007) during the 2006 shoot of "Tenderness," had to be lured by an expanded part and badgered by Baz Luhrmann to appear here. Based on the strength of Traub and Foster's performances as the leads, I can't help but wonder what the movie would be like without the expansion of Crowe's role. Christofuoro often comes off as too saintly, but Crowe's trademark intensity makes the characterization engaging where it could have been dull in less capable hands.

Billed as a thriller on its DVD cover, "Tenderness" is really more of a dark character study. Eric and Lori never attempt to out-crazy each other like Anthony Perkins and Tuesday Weld in the similar but more horror-based "Pretty Poison" (1968), nor do their commingled personality disorders fuel a spate of random killings as in "Badlands" (1973) or "Natural Born Killers"(1994). Crowe's detective is also held back from Dirty Harry excesses. The turmoil is mostly internal here. There are times in "Tenderness" where I wished that Eric and Lori went on that upstate killing spree and Crowe confronted them with blazing lead, but by the film's end, I was glad that it stayed away from crime movie clichés. Despite its sparse physical violence, "Tenderness" manages a quiet but effective gut punch. Laura Dern (the two-time Golden Globe winner) appears briefly as Komenko's aunt.

"Peacock" is another character study steeped in the language of the horror film, but the PR folks at Lionsgate have also opted to classify this release as a thriller. Please don't judge them too harshly for their categorization hocus-pocus. Label one movie a thriller and the other "a disturbing character study" and see which one makes its way into more Netflix queues.

Cillian Murphy, the Irish actor best known as the airline passenger from hell in "Red Eye" (2005) and the Scarecrow in "Dark Knight" (2008), is John Skillpa, a milquetoast bank clerk who lives in the creepy house he inherited from his abusive mother. Skillpa rides the same rickety 10-speed to work every day that he presumably took to school when he was a kid. He also keeps his bank book and a key to a safe deposit box in a metal case filled with candy wrappers that he stashes beneath the boards of his front steps as if he's hiding it from somebody. The person he's hiding it from is Emma, his cross-dressed female alter ego who leaves breakfast for Skillpa every morning with a nice little note.

When a caboose detaches itself from a train and crashes in his backyard while Skillpa is in a housedress pinning laundry to a clothesline, his Middle American, "Mad Men"-era neighbors assume that Emma is his wife. Emma soon becomes the talk of the town. She's on the front page of the paper, gives the OK for a senator to use the crash site for a campaign rally and makes friends with the mayor's wife (Susan Sarandon), who runs a local adoption agency and home for women. John, on the other hand, is still bowled over by the mayor (Keith Carradine) and dumped on by the requisite asshole boss (Bill Pullman).

Emma soon hatches a plan to adopt Jake, John's son that he fathered with a local waitress and sometime prostitute named Maggie (Ellen Page from "Juno") under nightmarish circumstances. John is against all of Emma's machinations, but can do little to rein in his conjoined better half. As Emma continues schmoozing with the town's elite, she gains in confidence and soon starts driving the dead mother's Impala instead of pedaling that old bicycle. By the time Emma takes up smoking and picking up drifters in dive bars, she's in the driver's seat.

More enlightened viewers may be uncomfortable with co-writer and director Michael Lander's likening of cross-dressing to mental illness, and "Peacock" can almost use the distinction of multiple personality disorder from transvestism drawn by the psychiatrist during the conclusion of Alfred Hitchcock's "Psycho" (1960). With its mother issues, the art director's use of taxidermy (albeit not in Skillpa's house) and early 1960s setting, "Peacock" already owes so much to "Psycho" that it might as well have dredged the swamp behind the Bates Motel just a little bit longer. However, "Peacock" isn't a Hitchcock homage like DePalma's "Dressed to Kill" (1980) nor a shot-for-shot remake, à la Gus Van Sant. Instead, "Peacock" feels like the same basic story as "Psycho," but altered greatly as it made its way through the rural grapevine. While Skillpa has plenty of skeletons in the closet, he doesn't keep a mummified corpse in the fruit cellar.

"Peacock" is short on thrills but will mess with your mind sufficiently. Although it's the weaker of these spooky character studies, it still packs enough atmosphere for a digital download or old-school movie rental. The DVD features an alternate ending that is both darker and more predictable.