In New Orleans, we were braced to be misunderstood again, but David Simon's drama gets our city -- and yours, too 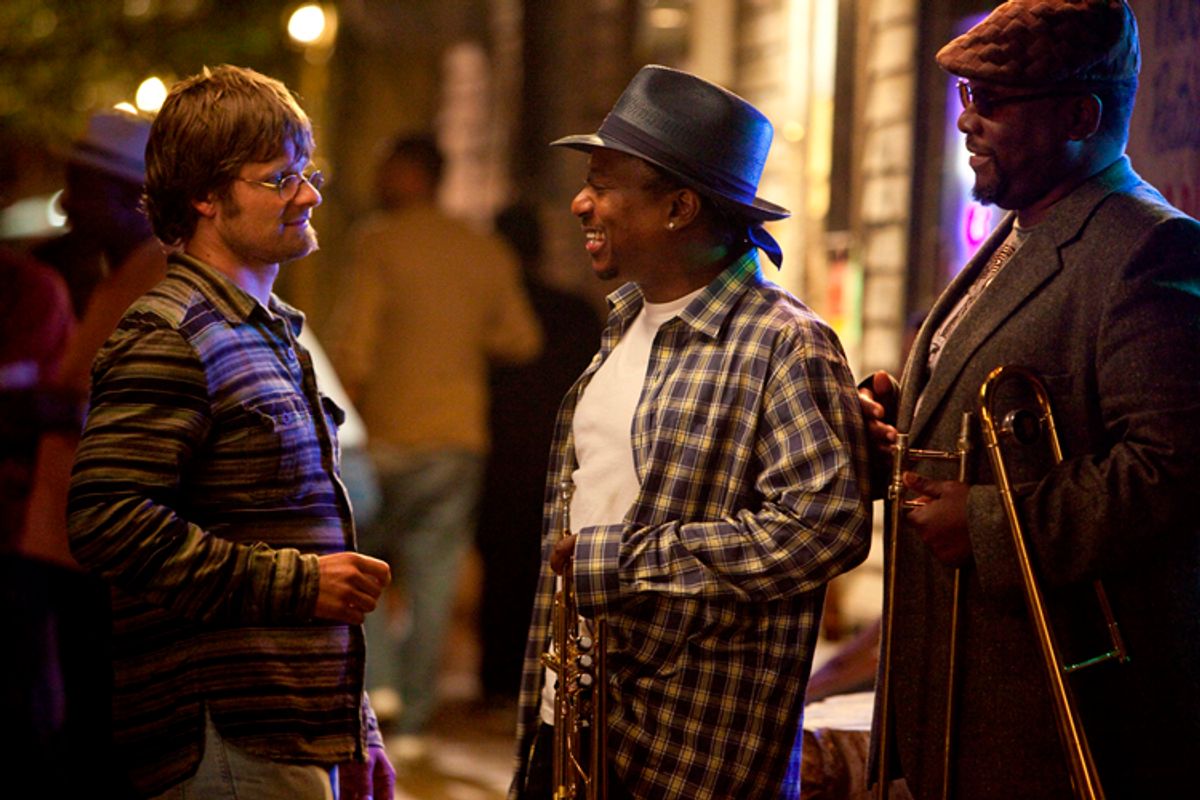 I am an old fan of David Simon, the show's creator, and spent Friday nights in college obsessively watching "Homicide: Life on the Streets," the detective show based on his book. But my anticipation of "Treme" had been fraught with concern: Would "Treme" get the city right? What kind of effect would it have on the city? Could it possibly manage to capture the fact that we are so lucky to live here -- and yet that residing here comes at great risk and cost? A few weeks ago, I had a conversation about my worries out on the streets of New Orleans' Central City, a largely unflooded, historic neighborhood whose shotgun homes have recently heard as many fatal gunshots as any neighborhood in North America. It was Super Sunday, an annual Mardi Gras Indian "holiday," and men, women and children packed the streets in vividly detailed, painstakingly stitched, brightly colored full-body Indian suits. I talked with a veteran civil rights lawyer, Mary Howell, in the middle of a normally busy street. After seeking to end police abuse against Mardi Gras Indians and other New Orleanians for years, Howell was present this day as a legal observer. We talked about Toni Burnette, the character in "Treme" based on Mary and depicted by the terrific Melissa Leo, who captured her characteristic diction and gestures with great aplomb in the premiere, and how the show might impact next year's Super Sunday: Would "Treme" open the floodgates to hipsters and cultural tourists, Americans longing for a non-homogenized version of community?

Our passionate discussion of the future of the city, with a backdrop of crumbling homes, festive music, and Mardi Gras Indians, could have been a scene from the premiere. Indeed, just that day I had run into actor Clarke Peters, who plays Indian chief Albert Lambeaux, enjoying the day (in plainclothes) just before I ran into Mary. I can only guess that his real-life doppelgänger must have been there somewhere. And me, a transplanted New Yorker living in New Orleans for the past decade with the fervor of a convert, could have easily been mistaken for Davis, especially after ordering a few gin and pineapples ("No tonic, sorry") out of an impromptu bar beneath the lift gate of an SUV on the parade route.

For New Orleanians, watching "Treme" can be a bit like a local version of Philip Seymour Hoffman's unrealized play in Charlie Kaufman's odd "Synecdoche: New York," in which a mad, detail-oriented genius sought to create a constant and simultaneous performance of the quotidian lives of an entire city's residents. The show is made by people who clearly adore and understand the city, and it takes great pains to get the details right. I recognize myself and my neighbors in these characters, these archetypal New Orleanians, and Americans will finally see this dynamic culture that's mostly been obscured by cartoonish depictions of New Orleans in media like the short-lived show "K-Ville." But I was surprised that the show isn’t just introducing America to real life here and instead presents something that transcends the unique geography and character found within the city's borders.

That more significant reality is that New Orleans, for all its exceptionalism -- its Hubig pies and Carnival -- is the canary in the coal mine of American democracy. While its architecture, music, food and unique wonders provided a cogent argument for the country's investment in its rebuilding following the storm (well expressed in the fine "Why New Orleans Matters" by "Treme" writer Tom Piazza), the seeds of its near demise are present in every part of the country from Baltimore, Md., to Richmond, Calif. You may not be able to get a good bowl of gumbo in your town or state, but there are very few places in America where you cannot drive half an hour to the nearest neighborhood with decaying infrastructure, crime, poverty, failing schools and other plagues and find the essence of the pre-Katrina New Orleans. What happened following the storm, "a man-made catastrophe, a federal fuck-up of epic proportions, and decades in the making," according to John Goodman's character on the show (based loosely on New Orleans blogger Ashley Morris), simply exposed our pre-storm desperation. That catastrophe, not the storm, flooded tens of thousands of homes, most of which were suburban, mid-20th-century ranches where regular families, like the real-life family of Wendell Pierce, who plays trombonist Antoine Batiste, lived.

So when Albert Lambeaux walked into his flooded concrete house in the premiere, a couple of  inches of muck beneath his feet, his heartbreak has nothing to do with the elegant, crooked, old wood-frame homes that people visualize when they think of this city. It has nothing to do with why New Orleans, and not some other place, matters, but instead relates fundamentally to our common conception of home, and what protections we ought to expect as citizens of this terribly rich country. (I wrote about coming home to my wind-damaged, roofless, 19th-century New Orleans home in Central City, two weeks after the storm, for Salon.)

Similarly, when we see Khandi Alexander's character, Ladonna Batiste-Williams, find out that her brother is lost among the inmates who were left to die in Orleans Parish Prison before they were transported willy-nilly across the state without regard to the insignificance of their purported offenses, we are hearing a true New Orleans story (which I wrote about for the Nation). But the subtext is that we are a country that relies on incarceration to lock up a greater percentage of its population than any place in human history, of which a disproportionate share are young black men. Again, New Orleans simply represents the razor's edge of a problem that is a defining issue in modern American life.

In this way, the show, like Dave Eggers' recent "Zeitoun," uses post-Katrina New Orleans to present a convergence of pressing American crises alongside some of the very things that redeem this country. In "Treme," the roar of a trombone wandering down Governor Nicholls Street sweetens the bleak realities presented by both David Simon's earlier show of urban American horrors, "The Wire," and the post-Katrina disaster that horrified Americans watching on CNN. But the joy of that music, of the celebration, does not obscure, in the show or in real life, the reality of police brutality, mothers who cannot pay for groceries, fathers who eschew their parental responsibilities, crime and staggering violence on the streets, and terrifying disinvestment in American infrastructure.

New Orleans is exceptional, and it does matter. It has Mardi Gras Indians, Sazeracs, po' boys and red beans. But, in addition to those treasures, the New Orleans in "Treme" presents the post-Katrina magnification of the woes that this country faces in nearly every community. While your town is not likely to have a second-line parade anytime soon, civic collapse could be coming your way. That's why New Orleans should matter to you.

Billy Sothern is a New Orleans attorney and author of "Down in New Orleans: Reflections from a Drowned City." He wrote a series of articles for The Nation about life in the New Orleans following Hurricane Katrina and blogs at Imperfectly Vertical.