World to U.S.: Obama gets a thumbs-up

America's global poll numbers are going up. Too bad that won't help the president back home 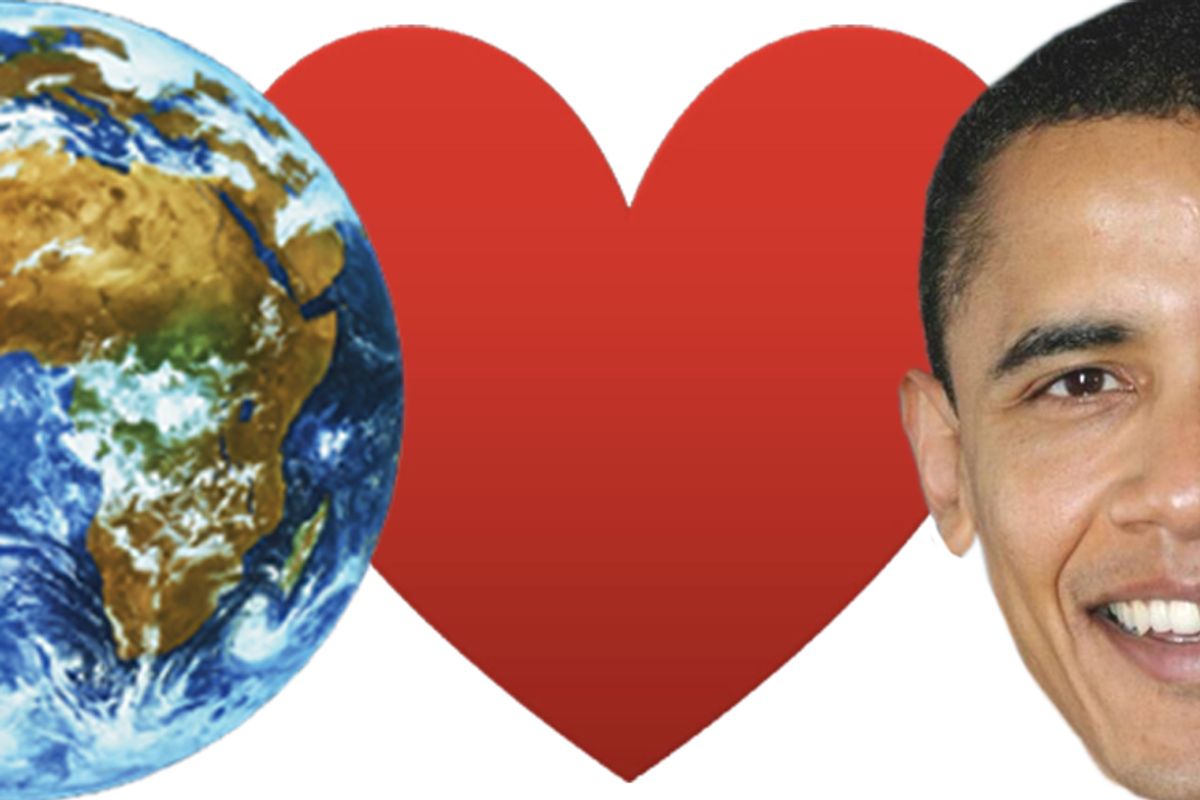 Yet another reason for Tea Partiers to get angry at President Obama. All that bowing to foreign leaders and reality-based diplomacy is working: The rest of the world seems to like the guy. That's the implication, suggests the BBC, of a new poll indicating that "views of the US around the world have improved sharply over the past year."

For the first time since the annual poll began in 2005, America's influence in the world is now seen as more positive than negative.

The improved scores for the U.S. coincided with Barack Obama becoming president, a BBC correspondent notes.

But don't expect the White House to be doing any cartwheels over the news. Furriners don't vote and according to the latest Gallup tracking poll, the president's domestic approval rating has sunk to 47 percent, down from near 70 percent at the beginning of his term. Indeed, even as the world has gradually woken up from the bad dream of the George W. Bush years, Obama has become steadily less popular in his country. So what if "positive views of the US jumped 21 percent in Germany, 18 in Russia, 14 in Portugal and 13 in Chile"? That's not going to help pass banking reform or save the Democratic majorities this November in the House and the Senate.

It all makes sense if you're a birther, of course -- Obama is popular outside of America because ... he's not American! Just look at how America is perceived in Kenya -- almost 85 percent of Kenyans surveyed by the BBC's World Service poll have a "mainly positive" attitude toward the U.S. Coincidence?

Insane conspiracy theories aside, one theory for why Obama's popularity has dropped domestically holds that there is a malign congruence between flat-out xenophobic racism -- he's not one of us! -- and economically linked class antagonisms -- he's not doing enough for us! No matter how well the stock market performs or GDP grows, Obama will not reverse the downward trend until the majority of the population feels economic change in their own lives. Even worse, global approval feeds into anti-Obama nativism and the retrograde America-firstism pushed by conservatives who regard every gesture toward multilateralism as a sign of weakness.

That dynamic simply doesn't play out worldwide. From a worldwide perspective, Obama came into office, and the global economy stabilized and started to grow again. The U.S. signaled immediately that it would no longer take a unilateral, "we're the only superpower and we can do whatever we want" approach to foreign policy. Instead of a born-again Christian convinced he was fulfilling God's mission on this planet, complete with references to "crusades" -- the world now sees a man hosting 47 world leaders to work on nuclear proliferation.

In this case, the world seems much more capable of appreciating nuance than does the United States. So Obama's carefully calibrated takes on world history -- in which he acknowledges that the U.S. isn't perfect and has made mistakes -- encourage a global sigh of relief.

But they don't do much for the unemployment rate in Michigan.