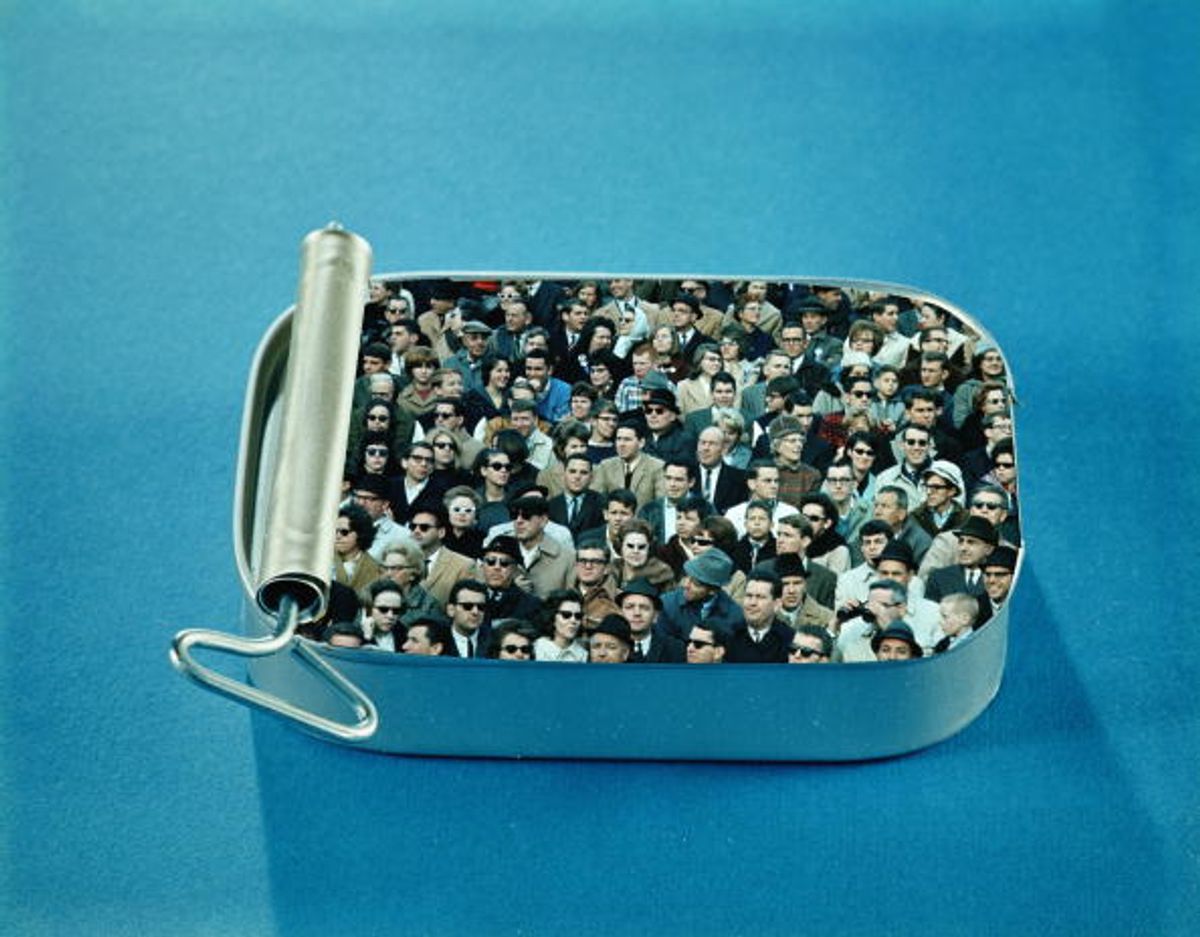 People have been worrying about the world’s pending overpopulation for more than two centuries. Robert Thomas Malthus sounded the alarm in 1797 with "An Essay on the Principles of the Population," which predicted mass starvation and went on to influence the likes of Charles Darwin and Margaret Sanger. Paul Ehrlich’s 1968 book, "The Population Bomb," forecast a similar fate; if the population kept rising unchecked, Earth’s resources would buckle. Many of today’s environmental thinkers, such as broadcaster (and "Planet Earth" narrator) David Attenborough, have called for drastic measures to limit the planet’s population before it’s too late.

But according to the veteran environmental writer Fred Pearce, they’re all wrong. In his latest book, "The Coming Population Crash: And Our Planet's Surprising Future," Pearce argues that the world’s population is peaking. In the next century, we’re heading not for exponential growth, but a slow, steady decline. This, he claims, has the potential to massively change both our society and our planet: Children will become a rare sight, patriarchal thinking will fall by the wayside, and middle-aged culture will replace our predominant youth culture. Furthermore, Pearce explains, the population bust could be the end of our environmental woes. Fewer people making better choices about consumption could lead to a greener, healthier planet.

Salon called Fred Pearce in his London office to talk about the reasons behind our population peak, the high cost of our aging world, and how TV helped save the planet.

Why write about the population debate now?

I’ve noticed an upsurge in interest in the topic. When I’m giving a lecture on climate change or water, I’ll get a question from somebody that says, "Yes, what about population? If we don’t solve the population problem, then we can’t solve any of these issues." The way that some environmentalists discuss population transfers the blame for global environmental issues onto poor people in countries where they’re still breeding a lot. It becomes a problem of overbreeding Indians or Africans rather than overconsuming Europeans or Americans. It troubled me ethically, and I wondered, "OK, is this true?"

Well, is it true?

Global environmental problems are not, and will not, be mainly a problem of overbreeding Indians or Africans. First, their birthrates are coming down fast, with Indian women, for instance, having fewer than three children on average today; and even African women have falling fertility. And secondly, because overbreeding -- in the sense of women having more than replacement levels of children -- is almost entirely in countries with a very low per-capita footprint on the planet. For instance, the carbon emissions of one American is the same as that of 20 Indians, 30 Pakistanis, 40 Nigerians and 250 Ethiopians. If, as economists suggest, the world economy will grow by 400 percent by 2050, then no more than a tenth of that will be a result of population growth. The issue is consumption, and that puts the onus right back on the conspicuous consumers to do something about their economic systems, not least before more developing countries follow the same model.

So these worries about overpopulation are unfounded?

When Paul Ehrlich wrote his famous book ["The Population Bomb"], women were having an average around the world of five or six children; now they’re having an average of 2.6. Fertility rates around the world have halved. That’s not just true in Europe and North America; they’re way below replacement levels in most of East Asia now. Not just China but Japan, Korea, Vietnam and Burma have replacement rates of fertility or below. Around the world, fertility rates have been coming down really sharply. So the population bomb as we’ve conceived it before really isn’t there. There’s still population growth going on, but that’s going to stabilize.

How does feminism play into all this?

Feminism, I suspect, is as much a consequence of falling fertility as a cause, though I am sure they reinforce each other. If you only need to have two or three children to secure the next generation, that is what women will do. And that gives them more options for a wider role in society. I think the reproductive revolution and the feminist revolution through the second half of the 20th century have gone together. On the one hand, thanks to advances in sanitation and medicine, women no longer need to have five or six children to make sure that two of them will live to adulthood. On the other hand, we've had the push for women’s rights in the workplace. The consequence of that is we now have many more women taking their proper role in society in so many ways, arguably for the first time in millennia.

What are some other factors that led to the population bust?

I'd say the advances in healthcare are the No. 1 factor. But there are cultural factors, too. The spread of ideas about different lifestyles for women outside the home has accelerated all these trends. TV is a huge influence here, probably more so than what we normally regard as education. Urbanization is a factor. When you’re in the countryside, your kids are an economic resource very early. They can help in the fields, they can look after the animals; there are piles of stuff they can do from the age of 4 or 5. Kids are an economic resource, which is why rural families tend to be larger.

But once you’re in cities, kids are an economic drain for much, much longer. They can’t help out in the fields because you haven’t got any fields. If they’re going to get a job, they’ve got to be educated, and in most countries that costs money. And having done all that, as soon as the kids are an economic resource, they probably leave home and set up on their own anyway. Economics that used to favor having children now favor not having children.

Should we be discouraging women in high-poverty, high-population areas from having children?

In short, no. It won't work and will end up being coercive. By and large, women want to have fewer children, even in high-poverty areas, and provided some basic conditions are met -- access to contraception, obviously -- they will do it. There are numerous examples. They don't need persuading. The holdouts are generally communities with perceived serious "survival issues" like Palestinians in Gaza and ultra-Orthodox Jews in Jerusalem, or those where it is in their interests to have more children, like in parts of rural Africa, or where there are overbearing patriarchies that prevent access to contraception. Conversely, encouraging women in low-fertility countries to have more children won’t work without draconian measures. For proof of that, see the failure of the Catholic Church: It ends up encouraging patriarchal social norms that push women toward ultra-low fertility, such as in Italy.

What do you think that the world will look like in 100 years?

Well, a gradually falling population would in general reduce global environmental threats, depending on consumption patterns. It could go lots of ways. It’ll be a society in which older people have longer lives and much healthier lives, with an average age in the 40s. I think there’s going to be a huge premium on healthier older age.

The aging of the population is clearly going to have a huge effect on our economy. How are we going to pay for it?

We have to harness older people as a resource. Their wisdom and knowledge is a huge resource, whether it is middle-class professionals becoming consultants when they retire, or looking after grandchildren so their own children can work. They are the social glue running things. All of this needs to be harnessed. Yes, the old will have to work longer. Why not? We will need to work harder on medical technology to ensure that the old stay fitter longer. Much of the reproductive revolution happened by keeping young kids from dying. Now we need another revolution to keep the old fitter for longer.

I think aging will be beneficial, too. The old tend to be less addicted to the ephemeral and disposable. They value things that last. They often value things that don't involve consumption, but "softer" things that bring enjoyment, like families. We need more of that. I think my mantra about being "older, wiser, greener" is a likely outcome.

So, you think the crash is probably going to be a good thing?

Yes, I think declining population can be a good thing so long as it isn't too precipitate. Current fertility rates in parts of Europe could see whole populations basically shrivel up and die. That could be too disruptive. But a "soft landing" could be good.

If chaos theory taught us anything, it’s that societies head off in all kinds of directions we couldn’t predict. Fifty years ago, if we had taken a slightly different path in industrial chemistry and used bromine instead of chlorine, we’d have burned out the entire ozone layer before we knew what the hell was going on, and the world would have been very different. There’s always scary stuff out there that we may not know about. You can’t predict the future. You can just try and plan for it.